Reboot Required Every 20 Days Or So To Restore Logging

My factory built system goes pretty well but after 20 days or more it stops updating and just a reboot for the web interface restores normal operation.

I have saved the logs but to start with this is the clipboard contents when it died and after a reboot.

It also indicated “Daemon is not running, start it at ~/scripts/feedwriter” in red

After a reboot it says this but seems to always work


Thanks in advance for any ideas.

If it crashes, the numbers on the app are completely wrong. Let me demonstrate with an example: 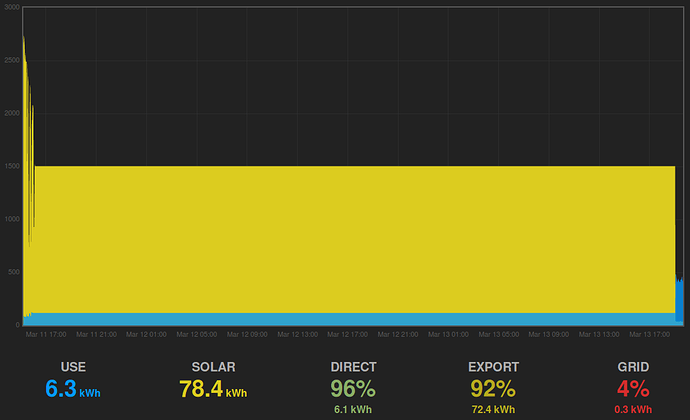 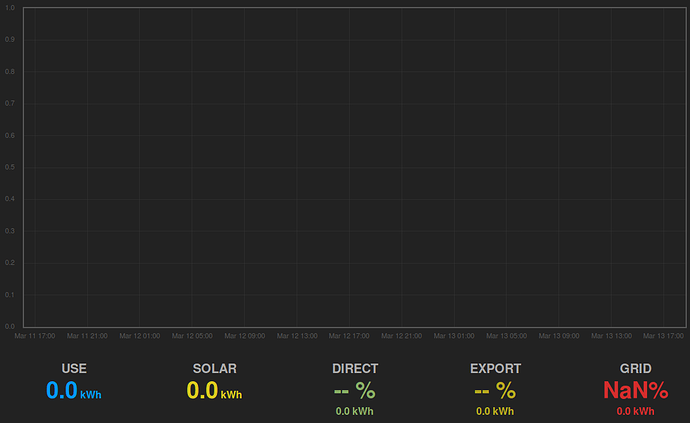 Back on topic, I haven’t looked at the issue in depth. In stead of tracing the root cause, I took the rather blunt approach of rebooting the whole device. This is the script in its present form:

I saved it as /home/pi/watchdog.sh, gave it +x rights and made a crontab for it.

The script basically checks the last three snapshots of measurements to see if a value (power, temperature, …) has changed. If nothing has changed, there’s something out of the ordinary and the script reboots the EmonPi board.

Did you update via the Setup > Administration > EmonPi/EmonBase update feature?

We did fix an issue a number of months ago that resulted in this behaviour, the two key items to update are emoncms core and also emonhub - but the full emonpi/emonbase update process would action these updates.

@TrystanLea - this isn’t the first instance of the phpmqtt_input.php script apparently causing issues over the last few months.

Part of the problem I have highlighted on a PR - it is because a subscribe is attempted when there is no server connection. There is also an issue that if the server reports an issus with the connection request, this is ignored.

Issue - subscribing to a topic when the MQTT client was not connected caused an …exception; not fatal but not nice. This has been noticed on a number of topics recently on the Forum. [Documentation](http://mosquitto-php.readthedocs.io/en/latest/client.html) The onConnect callback is only called if there is a CONNACK from the MQTT server. The onConnect callback assumed than any call to it meant a successful connection. This is not correct, only a response of '0' means success, so $connected now set as such. The reconnect try, did not check the connected flag before attempting to subscribe to the topic. By doing so the exception can be avoided.

This may not solve the issue, but may well help with diagnosing it.

Many thanks for the ideas.

Re Did you update via the Setup > Administration > EmonPi/EmonBase update feature? I had but I can’t recall if I had done it since I applied the WiFi patch.

It mainly said up to date but did replace five files.

I have rebooted it again for a clean start.

Are these message normal for startup?


Time will tell if it behaves, if not I will try one of the fixes suggested.

Hi Bjorn, I have checked your previous posts and not found any previous report of these crashes or any requests for assistance to resolve them, if you choose to implement such a “blunt” workaround without any attempts to help resolve the issue, you must understand why you and now Mike have these problems.

We can only resolve issues when there is good information to locate and correct the cause.

Your list of dates shows 8 crashes over 98 days, that’s 8 missed opportunities to fix the issue, the “20 days” might be a useful piece of info if that’s the max time a system will run, but it might also be a red herring as your crashes average 12.25 days and have happened at 5 and 8 days, but sharing this info helps identify patterns and helps diagnose the issues. It is in fact far more useful than sharing a method of “sweeping it under the mat” so that many more users fall foul of the issue down the line.

Unless you’re in some part of the universe where the sun shines constantly over a 48 hour period, the graph is clearly wrong.

I’m guessing you are not based in Barrow, Alaska, where the sun comes up in May and doesn’t set until August

Jesting aside, “the graph is clearly wrong” is the key bit of info there, it is not believable therefore it is clearly a fault. If it was showing zero production for a couple of days, that is believable, Is the data correct? Has something tripped? Has the inverter packed up? Has a shadow been cast over a small part of each string? Or is it just very overcast?

The way the data is presented isn’t prefect, perhaps it could be improved, but showing zero as a fault indication when zero is a valid value doesn’t work, I’m all in favor of a positive fault indication, but as you say that’s another topic.

The “funny” part is, when you zoom in, it actually gives different values depending on your zoom level.

There’s nothing “funny” about that, the lines are simply drawn between datapoints, if the last datapoint for a 48hr period is 2000 and the first datapoint after that 48hr period is 1000, there will be a line that stretches from 2000 to 1000 over that 48hr period, had it gone offline at night (no pv) and come back on at night, it would indeed show zero for that period. The reason it changes when you zoom is because the data set has excluded the datapoints that the line previously started and ended at, you have a dataset full of “null” datapoints, there is nothing to draw a line from or to.

Its definitely NOT normal to have to constantly reboot the Pi.
My local install (an emonbase on an RPi 2B) is currently showing:

204 days ago was probably when we lost power last…

Its definitely NOT normal to have to constantly reboot the Pi.

Absolutely, the perceived “need” to reboot should be sought out and remedied.

Its definitely NOT normal to have to constantly reboot the Pi.

Absolutely, the perceived “need” to reboot should be sought out and remedied.

Rebooting is quick and dirty. I know!

The right thing to do is to tackle the root cause and fix it. It’s all a question of priority (c.q. time).

the logs you quote look like Apache logs. Though I’m not sure which specific log file you got them from.
I don’t have them in syslog>

@IM35461 Found the log file. You’re using the web interface, which shows /var/log/emoncms.log
I have these log entries too:

At night, with near constant electricity use, constant temperature, the watchdog is a bit nervous. So it interprets that as an anomaly and executes a reboot. That means that a number of restarts by the watchdog were false positives.

I’ve now adjusted the watchdog to do more logging and to not reboot. I’ve included

Any other logfiles that could contain useful pointers to the root cause?

You also need to log the status of the following services, emonhub, feedwriter and mqtt_input.

A “top” printout to show RAM usage by process and cpu usage might be useful too.

[edit - also if you must use a watchdog, you really should check emoncms directly rather than openhab. you are not checking to see it the data is updating, you are checking to see if the data is being shared with openhab. emoncms and emonhub might not be failing if you are checking openhab. Also using an emoncms feed api would allow you to check the time the feeds were last updated NOT the last time the value changed. very different things, a static value may never change even when it is successfully updated every 5secs.]

You’re right about OpenHAB. Retrieving the data from EmonCMS will be much more reliable. @pb66 Good idea! Will make the watchdog less nervous at night

The script pulling data from EmonCMS API is ready. It checks when the temperature, power1 and power2 feeds have been last updated. If any of these feeds have been update more than 5 minutes ago, it logs a bunch of data.

The waiting game has begun. I hope it crashes soon

@IM35461 I’ve updated to low-write 9.8.28 | 2018.01.27 about a week ago and so far so good. Looks like the update fixed whatever the root cause was. Based on that experience, I’d recommend you install this update to fix the issue you’re having.

Just to let you know it has been working well till yesterday and failed at 70+ days.

Did a reboot and installed an update and now have a new problem. The feeds web page just gives the loading cogwheel but the other webpages and the Android app still work.
Tried cold boot but no better:(

I’ve updated as you have suggested and after 21 days the feeds stop logging.
In the server information next to writter (in red) “Daemon is not running, start it at ~/scripts/feedwriter” (see attached)
How do I resolve this issue? 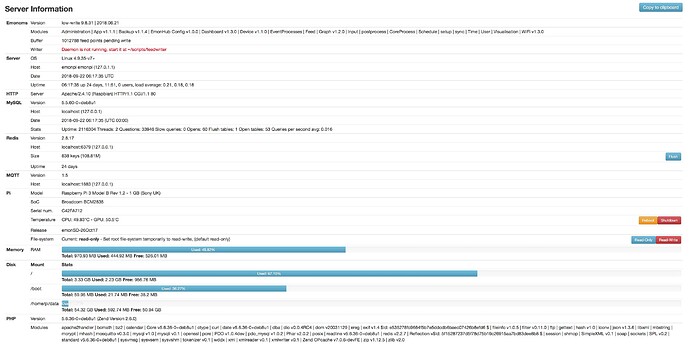 Have you restarted the feedwiriter?

It won’t fix the root issue but it will either return a fault/error that might give you insight to why it stopped running or it will start and write all that buffered data to disk before it is lost through a reboot or power outage as you apparently have “1012788 feed points pending write” held in RAM.

No, I had not tried that, I’m afraid I’ve already rebooted the system so I’ll try that next time it happens (I assume it will do this again in approximately 21 days).
Any ideas what the root problem could be, which is causing these feed data to remain in the buffer and not write to disk?