Thank you very much, that sounds like the perfect tool, just finished work, will check it out after i’ve had a bath.

Curious what you guys are using as a battery disconnect, controlled by a relay? Solenoids, contactor, mosfet, etc…

In the process of building a PCB that uses 10 - 400a power mosfets in parallel, to connect / disconnect the battery from charger & load.

Isn’t the problem with MOSFET that they can get stuck on/fail on?

That the same problem with most things… part of the reason why I’m running 10 mosfets in parallel that are rated at 400 amps each. My maximum load should only be 200a - 300a at most. Those 10 mosfets should be theoretically able to carry 4000a… so they shouldn’t fail with 300a… I’m also planning on running a 400a in-line fuse.

But again that’s why I’m curious what other people are using. I’m designing the pcbs anyway for my spot welder to make it look more professional so I figured I would just use the same PCB for my battery disconnect. And obviously I don’t plan on running 300 amps through the PCB traces LOL basically it’ll look like the kweld with big beefy copper rails for the current to flow through

I’ve Been an electrician for 25+ years, and I can’t even begin to tell you how many contactors and solenoids I’ve seen fail. Not necessarily failed closed, just failed in general… and when you’re talkin about 400 amp contactors or solenoids of decent quality, they’re not cheap

Isn’t this what a shunt trip typically would do?

This is what I’m using. Can hook this up to the relay attached to your bms. Still being shipped so haven’t tested but don’t see why it wouldn’t work… @daromer pointed me in this direction. I think he has one setup. 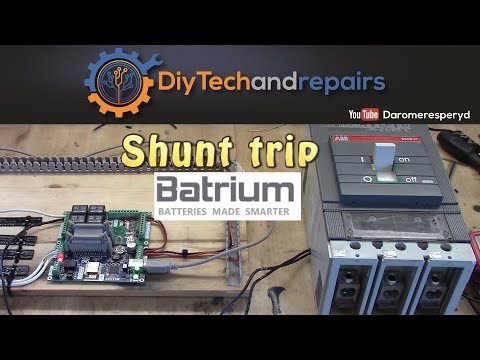 Yeap i have. Several actually …above is My video so

haha, didn’t even pick up on that

I had the forum translated into Spanish. She had to have written it in English. Apologies

I’d be in for a group buy in Australia

2 posts were split to a new topic: Modules for sale on www.batterysecondlife.com

Pretty bad when a builder has more runtime experience than the author. You should post a picture of your monster bank. My little 6kw pair will look teeny in compatison.
George

2 posts were split to a new topic: Does the polarity matter for the module serial connections?

Very nice arrangement, very clean. Like the extinguisher ball. So… the handles on the side are so you and a friend can pick power wall up and move it around… Haha

lol no chance of lifting it with 2 people, maybe 2 worlds srongest men might just be able to, it was to move the metal case into the garage which is 3mm steel lined with 12mm cement board so it weighs about 120kg itself plus the 300odd kg of battery in there

Figured it was there to stay…
What do you get for cell-to-cell deviation. My cells still had 60ah (from a wrecked vehicle) and I never saw more than 10mv spread.