Add me to the list, I will take two boards for sure.

Mike, put me on the list as well for a couple.

A post was merged into an existing topic: Modules are configured with different bypass temperatures

3 posts were split to a new topic: Modules are configured with different bypass temperatures

I’m behind getting a board to use the V4.21 on Lifepo4 Lishen batteries.
It has occurred to me that the most practical and economical solution is to adapt the SKOJau design from its fork of DIYBMS 4.21 DIYBMS_Prismatic - EasyEDA open source hardware lab
Without all the electronics leaving only the terminals and two pins that would match the battery pins of the V4.21 I leave a picture of the idea.
The problem is that I have not the remotest idea of using either Easyeda or kitkad because it gives me the feeling that it would be very simple,
I don’t know if someone with the necessary knowledge might think it a good idea and is encouraged by the design.

@GeorgeBoudreau Did your Leaf boards work out well? I have 28kwh of leaf cells that I am looking to use your boards for. Is there anything that could be made better? Or tweaks for better balancing or etc?

I cannot give you a quality report as the are not really in service. I have 2 x 14s packs (7 cells each) wired and tested but they only sit by my bench these days. I did deliberately imbalance one pack to for a top balance and all seemed well but that is all I can say at the moment.

If your leaf cells come from a single ‘batch’ there should be no real balance issues. Balancing is only noticeable if you are mixing cells with different current ratings. Usually when recycling 18650 cells is when you have balancing issues.

The only change is would make to the design is to go with through-hole jst connectors. The surface mount are fine if your soldering skills are top notch. When doing my early testing, teardown and rebuilds I ripped a few connectors from the pcb. Poor soldering on my end.

Using solder to physically secure a surface mounted component that may be subject to mechanical stress is iffy. A through hole version is preferable if there are no other issues…

I am not sure what version of firmware I used for the boards.

Thank you for your reply. The battery bank I have has a stand alone JBD bms and its been in service for about 6 months, but I’ve had issues from the 1st day they arrived most of the voltages reported between different packs changes if I cycle the battery off and on and one pack shows 47v when the rest show 44v, I was supposedly sold a 28kwh pack with 20kwh usable but the most I’ve gotten out of it is 12kwh. I’m guessing things are not very balanced. Anyways thanks for your contribution.

If your calculations are correct you may have issues. I would check individuals cell voltages after a heavy discharge. After that… Not sure what you would need to do.

One of my 4.2 version modules died and I don’t have a spare so I was going to buy one from the shop but they are 4.21. Will it work ok so long as they all have the same version of software installed?

Finally got mine 7s 5kwh battery just about finished. My focus is back on the diybms.

I’ve got them all flashed and talking to each other, no I am wondering what to use as a battery disconnect that can be controlled with logic level 5v or by a relay connected to the diybms controller.

I’m thinking of using maybe 10 - 40v 400a N-channel Mosfets in parallel connected to a relay that’s being controlled from the diybms controller. ( basically the same thing I made as my DIY spot welder. Which has been super reliable it only cost about $25)

I’m curious what other people have been using.

Keep in mind this is not going to be used everyday as a powerwall. This is more for emergency power during Hurricane Season etc…

I am interested, I am in Australia, maybe we could do some kind of bulk build for each country?

Yes you can mix and match, any idea what killed the other one?

I am using one 4568 and it connects inverters. At the moment of connection, the capacitors in the inverters are discharged and we practically get a short circuit at this moment. The transistor can withstand. In the next version I will use a thermistor in tandem with it.

Today I have tried to update some module and at the end of the firmware load,If I choose Y the blue led keeps flashing very fast and does nothing else. I get this

if I choose to answer all the questions that No

In the end, if it tells me that the Fuses match your indications but the module, I connect it to a battery and the control does not recognize it, not even any led lights up at the time of the battery connection (the usual thing would be that some of them would flash and then every few seconds a short blink of the blue led) 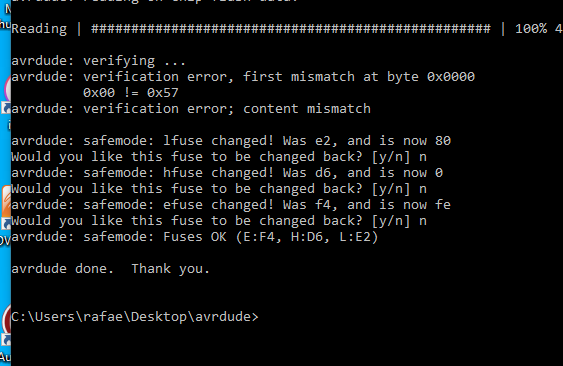 Solved by reprogramming with the USBASP at 5V instead of 3.2V

It was odd. For over a month I had been seeing one of my packs as lower than all the others and I thought I had a bad cell in there so I got the pack out and tested it. In fact this pack was higher than the others so there was some kind of issue with the diybms module on that pack. When I put it back together and looked at the monitor page it now showed this pack being higher than the others (as it should have). I think somehow unplugging the module had reset something. I thought I’d just reflash it to be sure it was back to normal so I did. Visual studio flashed it and checked it without issue but then proceeded to do it again, and again. In all it reflashed it about 6 times before it finally stopped. After that I plugged it back in to the chain but it no longer worked. I am no longer able to flash it either. I wonder if it had a bit of a bad solder joint somewhere that caused the bad cell voltage reading in the first place and then caused it to fail altogether but it’s very odd. Luckily I also have an Ebike BMS on my packs too in order to provide over charge and over discharge protection so that would have prevented the module being over charged.

2 posts were split to a new topic: DIYBMS interface to mySQL

2 posts were split to a new topic: Pre-charge relay when using a main contactor