I would be interested to hear if anyone else has been using PatformIO and what your experience has been:

Getting an Arduino based project (or other embedded platform) to compile and upload can be a pain. Making sure all the libraries are installed in the correct locations and of the correct versions can be tricky and time-consuming.

I’m sure many developers will agree that the tools we use for embedded development are generally not as good as those used for web application development.

The Arduino team have done a good job with their IDE to try and make the embedded development tool-chain setup as easy as possible. However, I still find library management a cause of frustration. Especially since I move between computers and OSes frequently.

Recently I have been using PlatformIO and am rather impressed with the ease of setup, speed of compilation, uploading (auto port detection), and most importantly an excellent library manager.

PlatformIO is an open-source ecosystem for IoT development. 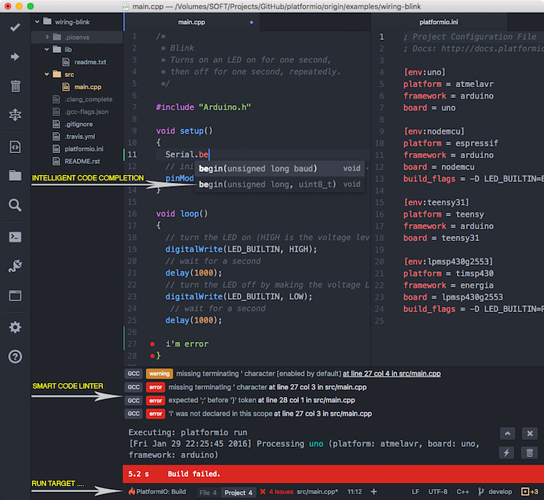 This post got quite long, therefore, It’s been split into three posts:

Here are some things that have impressed me about PlatformIO (pio) after using it for a couple of weeks:

PlatformIO has some excellent quick start docs to cover setting up your first ‘blinky’ project, therefore I will not duplicate here. In this example I focus on setting up pio and compiling emonTx / emonPi firmware. This example assumes a totally bare metal machine with nothing installed except python (2.7 recommended). Pio works great on a Raspberry Pi.

This guide used command-line steps on Linux, if using windows or if you want to use the platformio IDE see PlatformIO Getting Started Page.

The PlatformIO IDE or Atom IDE is excellent and very easy to use (self explanatory). This guide uses pio via command line as this gives a more hands-on experience to how pio is working.

The easiest way if running Linux is to install use the install script, this installed pio via python pip and installs pip if not present. See PlatformIO installation docs:

We’ll use the emonTx (V3 discrete sampling) as an example here but the steps are exactly the same for emonPi.

or shorthand for the lazy

That’s it! That’s all that’s needed to setup pio from scratch and compile emonTx firmware

The latest version of the libraries are automatically cloned from their native git repos into the .piolibdeps folder in the project dir.

3a. Via USB to UART programmer to emonTx

Pio will attempt to auto detect the USB programmer and upload

Note: you will need sudo unless you have correctly configured udev rules.

There is even a built in serial monitor

This is where things get very exciting, pio can compile the code directly on a Raspberry Pi. The latest version of pio (due to be released in the next few weeks) will have built in support for the emonPi auto-reset on upload using GPIO4

The emonPi board is defined in platformio.ini in the emonpi/firmware folder:

All that is needed to compile and upload directly on the emonPi is:

Thanks a lot to Ivan Kravets for helping integrate emonPi into the PlatfomIO ecosystem. View commit changes

Stay tuned for part 2/3 of the PlatformIO post series which will cover setting up firmware continuous testing using Travis CI and auto compiled binary generation on release tag directly on github. This is currently live on the emonPi & emonTx repos if you want a sneak preview. See travis.yaml file and Travis build status icon on the main emonpi repo Readme.md.

any suggestion how to do this compilation on W10 ?

PlatformIO IDE should work fine on windows 10 but I don’t have a W10 machine to test:

PlatformIO is a professional collaborative platform for embedded development

Let me know how you get on.

@glyn.hudson This link now returns a 404.

the emonTx v3.2 pre-dates PlatformIO (in OEM) by quite some time.

@glyn.hudson This link now returns a 404.

Thanks for letting me know, the link points the the old emonTx FW folder e.g GitHub - openenergymonitor/emonTxFirmware: An open-source wireless energy monitoring node

The new correct repo for emonTx V3 is: I’ve also updated some of the PlatformIO commands to use the latest version. I’m still using PlatfromIO daily. Over the last two years it’s got better and better. Library dependence can now be specified to the exact version (e.g. like a Ruby Gemfile) so we can be sure that our projects will reliable compile even if the libs are updated in the future.

Thanks for letting me know, the link points the the old emonTx FW folder

I’ve also updated some of the PlatformIO commands to use the latest version.

I quickly tried to get the V3.2 Discrete sampling version to build last week and could not get it to. Was not sure how to specify the special libraries so ended up copying them into the .lib folder. If there is an easier way it would be good to know (have not looked yet as I am away). Even with this I got some errors.

I’m actually using PlatformIO within VS Code which I like very much but there is just so much to it - a bit like a modern Emacs.