For sometime now a gripe of mine has been the way emonTH sends 0 values on startup after a battery change, from the outside looking in, how can a device possibly report it’s battery value is 0v (for example).

I have since discovered this is the factory test where at boot time it transmits 10 0 values to test the rfm. Fair enough, we’re pleased it is being tested, but at what cost? Having all my data zeroed during a battery change means my data is compromised unless I go in and remove all the inaccurate data.

Recently playing with an emonpi, I have now discovered it does the same. I have node 5 in use else where and each time I power up my test/dev emonpi it transmits a load of zero’s causing issues for my node 5 as other emonBases catch that payload. I have now temporarily changed the group to 200 on the emonpi to avoid this issue, but this now means I do not receive any of my group 210 devices which would have been useful for testing/developing on the emonpi.

It would be good if we could NOT factory test every device everytime it is powered up after leaving the factory. 2 simple solution spring to mind.

I really would prefer it if my emon devices only ever transmitted “0” if that was an actual reading, having code that sends zero’s for any other reason test, error or just confusion undermines the value of any and all genuine “0” readings as “0” no longer means “0”.

Recently playing with an emonpi, I have now discovered it does the same.

I can’t remember when it first appeared, but it’s been in the ‘stock’ sketches for quite a while. [Edit: since the emonTx V3.2 in February, 2015]

It’s ironic that we went to great lengths, in the days when the emonTx used the high-pass filter to remove the bias offset, to not transmit the false values generated as the filter settled, only to replace them with the factory test false values (albeit there’s only one transmission, not five or six over the first minute or so).

I thought it might but all my emontx’s use custom FW and I wasn’t going to search the sketch repos to find out. It really isn’t acceptable IMO to send 0 values that can compromise good data feeds, or worse, it could trigger an alarm or reactive action.

I understand the need, but here has to be a better way!

The easy way is, take a leaf out of your book: transmit the factory test on a different group. That just requires the shop to have a receiver dedicated to this purpose, set to that group.

That is so easy, I think that should be put forward as a serious suggestion!!!

Although, I guess there’s always a chance someone could be using that test group, but that could be easily avoided by documenting it as such so users avoid it.

All it requires, for sketches using my rfmTx Lib, is one line changed in the sketch:

Here’s the call to transmit:

TBH now I think of it, just transmitting an odd number of 0’s or int’s 0-255 would solve it for me as emonhub would spit out the payload as it expects an even number.

I don’t favour that - it a trap for the unwary at some point in the future. If somebody uses that group, at least it will be a bit more obvious, especially if there’s a #define TESTGROUP 199 – or whichever group we choose.

I don’t favour that

No I wasn’t advocating it, just saying it didn’t have to be a disruptive test packet when the decision was made, just a single byte countdown would have avoided this issue, it’s the padding out to mimic a full payload that has caused the test payload to be mistaken for a valid payload.

[edit] although I have to add I would happily (or reluctantly) accept any of these suggestions over false zero readings!

Upon (re)inserting batteries the first payload is always all zeros (except pulse… count which is always 1). I haven't looked into this thoroughly yet, just making a note here at this stage for future investigation. Either the settle time to the first packet needs extending, the first payload needs to be discarded or the order of events changed so only a properly populated payload is sent. A zero temperature reading is often a valid temperature reading so a 0°C value should never be sent unless it is a true reading, this is why we moved to out of range 300°C error codes. Plus there should never be an instance where 0v battery voltage is recorded, if the battery voltage was truly 0v, how was the data sent?

It works for me. 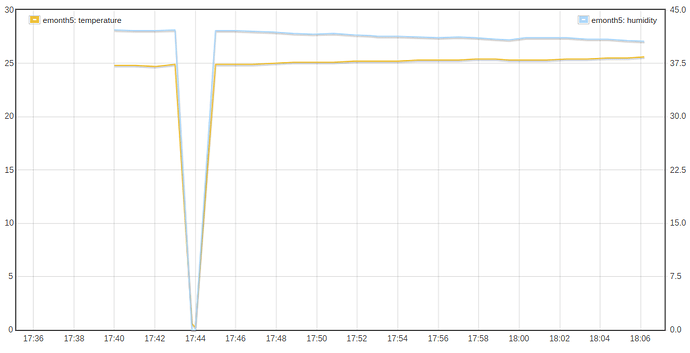 At 17:44, I restarted the emonTH. OOPS - there’s a zero value, though not surprising as it’s the default sketch - well almost, it’s actually using the RFM69 Native format because that’s what my emonPi is running now.

I call that successful.

), I think this will cure your problem.