An interesting use of a CT.

I wanted to determine my daily gas usage, but obtaining a reading from the Gas Meter would be a hassle, it’s outside and doesn’t have anything I can monitor to get a value as a feed.

However, the only item in the house that uses gas is the Combi Boiler. The boiler is an older model with a fixed speed pump and not using open therm.

So, by using an EmonTX and a CT on the 240v supply cable to the boiler I’ve been able to do a calculation as a feed within emonCMS and determine the boiler firing rate and its gas kw usage and so get a daily kWh gas usage figure.

I never thought I’d get anywhere accurate, but it’s very close to the Smart Meter IHD displayed value, and for the previous month it’s only 5kwh out for the whole billing period. You have to monitor the current to get an idea of what the pump/fan and various solenoids draw so you can tailor the calculation, but it’s worked and been an interesting experiment.

Graph shows what the feed calculates each day. Total of all the Bars comes to 600kwh 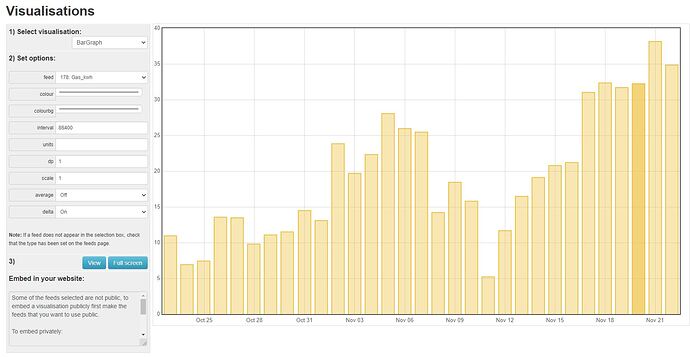 Below is from my monthly bill from EON.

Very neat! is the calculation mostly based on the run time and assuming a fixed gas consumption factor when running?

I have over a period of time determined what watts (electric) the boiler is taking at the moment its fires so that I can determine the wattage of minimum firing. It meant sitting at the boiler listening and watching the boiler while watching what the CT on the supply cable was indicating.

So if I take this known value away from what I measure at any one time I can come up with something that equates to a firing rate. Mine is roughly 90 watts to 130 watts for minimum firing to maximum firing.

So with this figure between 37-100%, I go to the boiler specification and find the kw range of the boiler on the central heating function, and its roughly 9-24kw. I now have how much kw gas its using at any particular moment. Then use the Power to kwH function in the feed.

Surprised it actually worked out, but hey, that’s what happens when bored one afternoon

the spike is something that I’ve never been able to track down its cause, but it’s not having a huge impact on the results overall. Something operates in the boiler which has a high instantaneous current draw, perhaps a solenoid 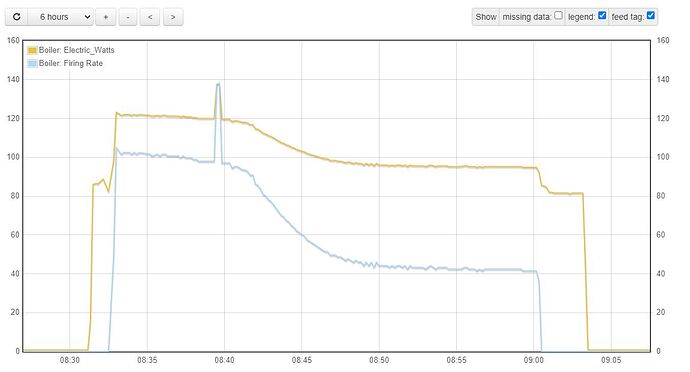 Wow, I think it’s impressive to be within 5kWh of the meter reading. I’d be intrigued to know how it does over the next couple of months. Great work.

Are you powering the Tx with the 9V AC-AC adaptor?

Yes, I power it with the 9V AC Adapter. I did also think about compensating for differences in the supply voltage but it’s not changing by much over the day.

This isn’t its first month running, I’ve had this in place for a while. Last month I total in emoncms 400.3kwh and EON billed me for 409kwh. The errors are lower in the winter as the duration of firing is longer each fire. It’s an Evohome controller on the boiler so when it has a few short-duration fires the update time of the EmonTX is against me.

It’s also been interesting to see how much Electric the boiler uses and that also totals up quite a bit for a year. I had a discussion with a boiler supplier the other week when looking at upgrading the boiler. One of the questions I asked him was since it was Opentherm, how much extra running would the pump be doing? He was confused why I asked that because he had never considered the Yearly kWh of the electrical side of the boiler which adds up in these days of high prices. He was only trying to sell the lower gas consumption, but the lower flow temperature was going to increase pump running hours.

Congratulation Mike on your resourcefulness, as a heating engineer I can easily relate to what you have achieved. When you consider a new boiler have a look at the Viessmann range they have an ap that outputs all boiler data both electrical and gas usage. I use it within Home Assistant and it is amazing the amount of imformation it provides. The ap also runs on IOS and Android phones.
The pumps on modern boilers use considerably less electricity than older pumps too.
Weather compensation is also a very useful feature of modern boilers. When suppliers are trying to sell boilers they often mention the lower gas consumption of condensing boilers. However, when the return water temperture is above 55°C, or thereabouts the boiler stops condensing and the efficiency drops.

Your workaround is indeed clever. However would it be possible to get a Smart meter? Then you can either download the data from the energy network or your supplier, or you could get a CAD such as the The combined Glow in home display (IHD) and consumer access device (CAD) is  for people who'd like a real-time view of their energy consumption from their smart meters and access to that data via our Bright app, APIs and MQTT. Wifi enabled...

Which can let you read data locally and more frequently. The above supports MQTT for local access.

Your workaround is indeed clever. However would it be possible to get a Smart meter?

The issue with your suggestion is you lose the immediacy of knowing the boiler is on. Gas readings are only done once every 30 minutes to preserve the battery in the meter.

yes, the real-time information from the boiler is very handy. In addition to its electricity usage, I also use some temperature probes in the emonTX to measure the inlet and outlet water temperatures. It’s allowed me to tune my Evohome system a bit better.

In addition, you get a ‘fingerprint’ for its operation and by occasionally comparing graphs I can get a heads up of impending problems. I did spot an impending diverter valve failure using the data last year.

I do have a smart meter but reading it would have been more hassle than the way I did it. In the future when I eventually have to replace the boiler and my calculations don’t work then I’ll consider replacing the Smart Meter IHD with one which has MQTT such as the Glow one.

My non-MQTT Gas Meter IHD which I leave on the kitchen counter appears to update its gas usage kwh figure every 30 seconds because I can watch the figure increase as I run a hot water tap. So that’s close to real-time and I’d assume that one of the glow IHDs would also update locally with the same frequency. It will only be the transfer of data off-premises to the DCC network that happens every 30 minutes.

My non-MQTT Gas Meter IHD which I leave on the kitchen counter appears to update its gas usage kwh figure every 30 seconds because I can watch the figure increase as I run a hot water tap.

Most odd. My understanding is that the meter spec is that it only sends data every 30 mins. It doesn’t matter what IHD it is, the IHD just reflects the data on the HAN.

11 posts were split to a new topic: Boiler and UFH gobble up electricity

The spikes in my Graph turned out to be the condensate trap pump which runs off the same supply. But I ignore these spikes in the calculation anyway clip the firing rate to 100% before I use it for kwh calcs. 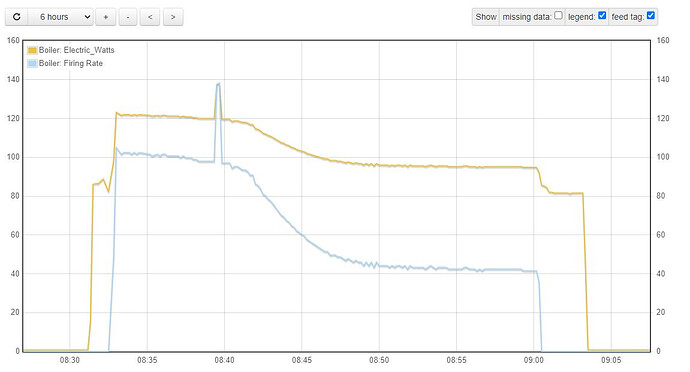 Another month passes and the results from this never cease to amaze me. Initially, I thought the resulting data from the calculations would be close enough to give me a trend of gas usage. I never imagined it to be near accurate.

So, as this month completes, here is how the calculation from the CT matches up with the Smart Meter IHD. 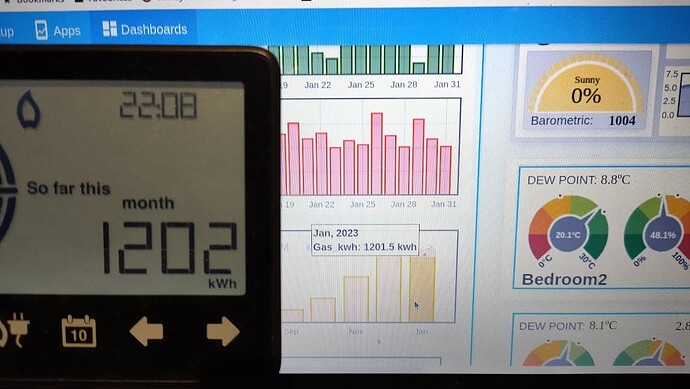