Boiler and UFH gobble up electricity

My Worcester Greenstar 24kW system boiler and underfloor heating gobble up electricity.
The Bosch controls run at 12W continuously and the pump/fan in the boiler modulates between 0 and 90W , plus the UFH Pump uses up to 60W . On a cold day I can use up to 2kWh of electricity to have gas heating on. It is the biggest single user of electricity in my house

CH_Power1332×448 32.5 KB
I like your idea of pattern matching to fine tune the gas meter reading, but ideally I’d like to use less electricity.
Calculating Gas Usage in kWh using a CT
Mike_Henderson (Mike Henderson) 2 December 2022 14:39 #2

That seems a lot of usage to run a boiler. I’ve just looked at mine, and this is a 24kw Potterton Combi boiler just feeding radiators and hot water for kitchen and toilet sinks. The control system is Evohome, but the boiler doesn’t support Opentherm so we’re on On/Off Control only.

I used the data I gather in EmonCMS which is gas usage, radiator valve positions, evohome demand, flow/return temperatures, room temperatures, and boiler bypass operation, to determine when it’s most efficient to begin heating a room.

For example, I have a gaming room that I schedule to heat up at 7.00 pm. I used to heat up the bedrooms later in the evening. I found it used less gas overall if I start heating the bedrooms at the same time as the Gaming Room. But you need all the data points to show it. That was one of the reasons I wanted to have real-time gas usage as a feed.

I hate the boiler I have as it only fires down to around 9kw. I’d like a more modern boiler some of which can fire down to 3kw. But unfortunately, this boiler looks like it’ll outlive me as it just goes on and on not giving me the excuse to replace it. But it is a hassle when only a single room is calling for heat and the least the boiler can throw at it is 9kw, there can be quite a bit of cycling and that was causing the loss of efficiency and that’s what I managed to schedule against.

Are you on Opentherm with a lower flow temperature needing longer run times?

No. I am using a Bosch Sense II controller that runs a Weather Compensating Temperature control in conjunction with the UFH. The Greenstar also has in internal diverter valve which in conjunction with the SenseII allows me to run up to 80C for HW but below 45C for the UFH (an outside temperature of 0C sets the flow to 45C and then it straight lines down to cross the outside temperature at 22C - or something like that)

Is the graph include the UFH pump? I was wondering what’s going on in the morning of the 23rd that flat line for around 8hrs?

I went reading on the web as you do and keep on coming up with articles and forum posts saying that with Weather Compensation turned on your pump will run all the time. Do you think that’s correct for yours? A couple of weeks ago I had an install of a Worcester Bosch Greenstar Highflow 440CDi with the Worcester Wave controller. It might be my imagination, but I think the CH pump runs constantly. Even when it's been hours since the heating was on, I can...

Yes the UFH pump is on the same fused spur as the boiler, so I measuring both. I’m not sure I know what is happening either! (The situation is a bit complicated as we have daughter, son-in-law and baby staying in Bed 1 which is its own heating zone and my “house mates” are muddying the water.) Here is another picture.

CH_Power#21357×414 33.8 KB
However there doesn’t appear to be any rationale as to when the UFH pump is on and off.
The pump itself is a Grundfos UPM3 AUTO L running in Constant Pressure 3 mode. This is the as installed default, and I don’t know if there is a better setting.
Very interesting read on the Wave controller. I have zero confidence in Worcester UK technical team. I wanted to control my two hot water cylinders independently and the Sense II manual shows how to do this with a MM200 device. This isn’t sold in the UK so I got one from ebay.de. I fitted it and its there on the EMS bus but can’t be configured. Long story short, the firmware in my boiler is stopping it from working and Worcester can’t tell me why the EMS bus for a UK boiler has been modified to stop it. Grrr. Obviously I can’t hack the boiler so it’s down to a sonoff mini to manage HW#2.
Mike_Henderson (Mike Henderson) 2 December 2022 20:45 #8 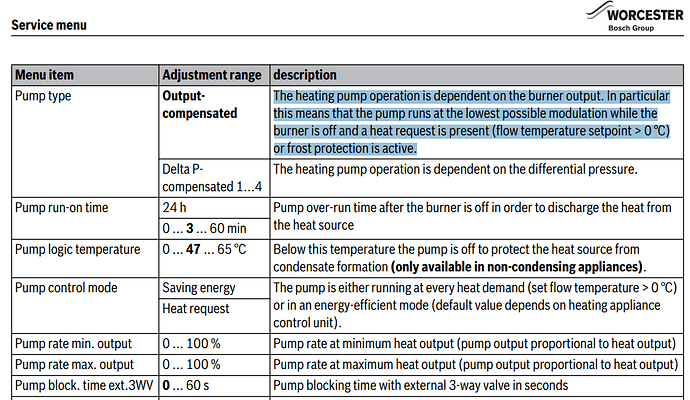 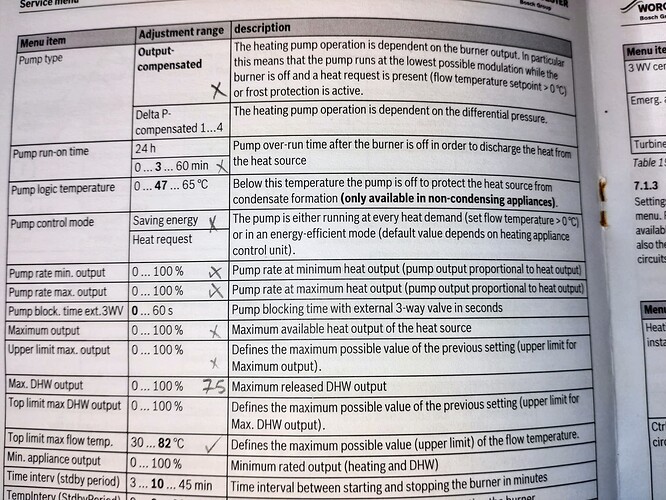 It looks like the problem was with the IVAR blending valve on the UFH manifold. After some informed “fiddling” with the blending by-pass valves, it looks like the secondary valve may have been partially blocked with debris, which meant that colder return flow from the UFH was not getting back to the boiler. This meant that the flow into the UFH was never hot enough so demand wasn’t satisfied and the UFH pump was running continuously, also to boiler was “cycling” as it couldn’t dump heat. 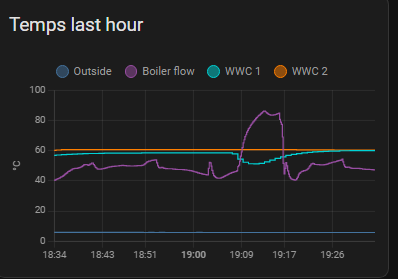 I’ll try to monitor ele
ctricity used in CH vs gas used in the CH and see how much difference this makes.

It looks like the problem was with the IVAR blending valve on the UFH manifold. After some informed “fiddling” with the blending by-pass valves, it looks like the secondary valve may have been partially blocked with debris, which meant that colder return flow from the UFH was not getting back to the boiler.

The beauty of data collection and why it is so valuable.

You don’t know what is happening until you measure it!

Moved to its own topic

@borpin Totally agree about measurement to which end I have ordered some DSB1820 sensors and am going to wire them into a Tasmotised Sonoff Mini with the aim of monitoring the incoming/outgoing temps to the manifold/UFH. I’ve got one working with a single DSB but I think I may need to use a breadboard for four probes. 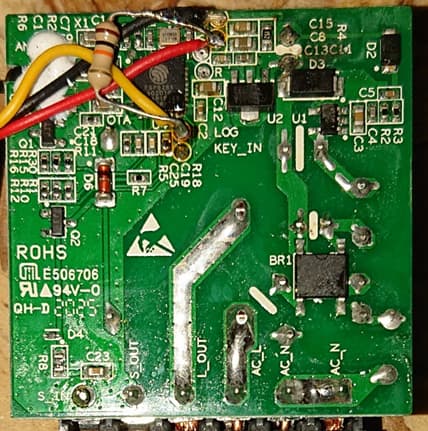 I connected four of those DS18B20 temperature sensors to an EmonTH and use these to monitor the temperatures near where the Bypass valve is on my system. From the data, I get an idea of when the valve starts to lift, and has allowed me to tune it slightly better than just calculating a pressure setting.

Using the EmonTH made it easy to get the data into EmonCMS. Not many modifications to the sketch to increase to four extra sensors.