I’m having an hard time figuring out how I should configure my virtual feeds.

Let’s say I have two sensors : A and B. They work together to give a value that interests me : A+B.

What processes do I need to get a graph that is the sum of the values of the sensors A and B ?

The sensors send the data every 15 minutes.

I have tried a lot of possibilities, none of them gives what I want… That’s why I’m calling for help here…

Thank you in advance,

I have two feeds (A and B) 'Logged to Feed". If I try to create a New Virtual Feed using ‘Source Feed’ and Feed A I get the following error message: ERROR: Could not save processlist. Cannot use virtual feed as source.

Am I missing something or do you think this might be a bug of some kind?

I was able to “add” them using +inp and then specifying input.
the value in feeds is fine, but when viewing it in a graph it is all messed up 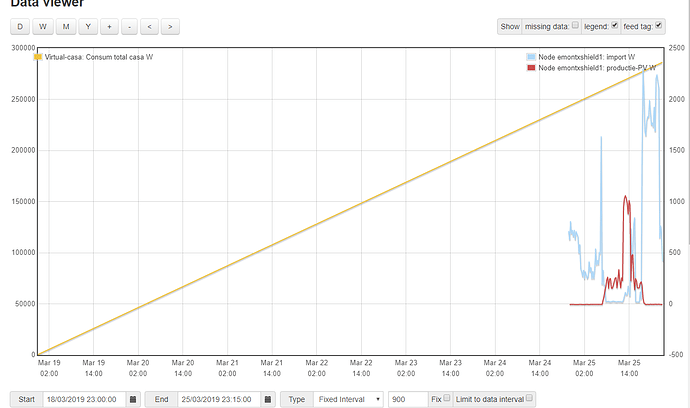 I edited modules/feed/feed_model.php and commented lines 1093 and 1094, now the script allows me to add the sources

but still it does not work, it calculates zero values

I think the problem is in that php file. But I’m not that good at programming to properly debug it

After messing with this for a while I realized that Virtual Feeds may only be created from physical inputs, as Dan also discovered.

Processes created from a physical input (such as power to kwh/d) can’t [currently] be used in Virtual Inputs. I don’t see any reason why one should not be able to used ‘calculated inputs’ such as kWh/d if they are logged.

A work-around: If I send data from Node-Red to EMONCMS it shows up in the Inputs list and these data can be used in Virtual Inputs -even though they are not real ‘physical inputs’- so, to calculate kwh$/d, I can send kwh/d to Node-Red, calculate kwh$/d and return this value to EMONCMS. This value then shows up on the Inputs list and can be used in Virtual Inputs. I do not recommend this method for critical or robust systems, but it works.

So why not the ability to create a virtual feed from a kwh/d process? I see no reason why Virtual Feeds could not be created from any input, physical or calculated. However my knowledge of EMONCMS programming is essentially zero so I defer to the experts.

the best workaround is to install the post processing module

Is the Post Processing module something that I need to Install?

Hello.
My software is and fresh install of 9.9.8 version.
In this fresh install I can’t make a virtual feed when the source feed is an calculated feed.
This give the following error already report:
ERROR: Could not save processlist. Cannot use virtual feed as source

I have another raspberry with 9.9.8 upgraded version when I have this virtual feed done and work well. 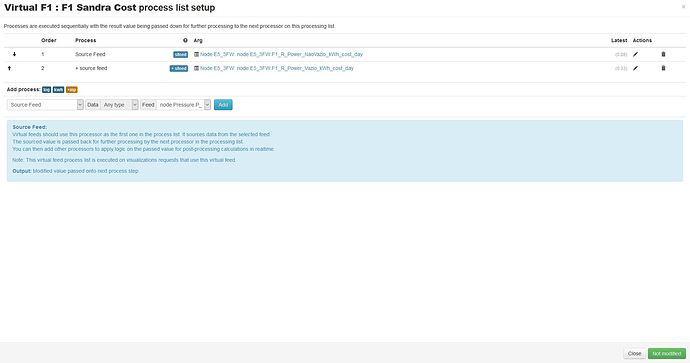 The objective is to add a multi-tarrif cost day to have the total of the cost by day.
Can some one help ?

For completeness, and as these issues remain and may or may not not be resolved until the next update, I’ve described how I get around these problems.

Unfortunately the post processing module also has issues which need to be resolved. Here’s an example:

No “OK” button. Strangely, the problems encountered with the Post Processing module differ at random. (I know the [Return] key has to be pressed for the [OK] button to appear.)

To conclude Post Processing and Virtual Feeds come up short and I don’t have the knowledge to resolve this myself.

In my opinion not having the ability to create ‘calculated feeds’ is a ‘dent in the armour’ of EmonCMS and greatly reduces its usefulness in converting Data to Information. I must also say that EmonCMS is great and the work that has been put into it is commendable, I hope I’m not perceived as being too critical.

Currently the only way I know how to do what I need to do is to use Node RED for the UI, send any data needed back to EmonCMS via MQTT for data storage only, and do all calculations in Node RED.

There is a new release very close so when it comes, upgrade to that and see if the problems persist.

Good to know a new release might be soon. I’ll let you know here if/when I make progress.

Any new about this release ?

Not yet. In 9.9.9 update description no reference to Virtual feeds…

I will update after backup data and evaluate the problem. After that I will give feedback.

The patch I submitted was merged so it should fix it. Not all the minor fixes get mentioned in the release notes.

Just upgraded to 9.9.9 and adding feeds and source feeds work like a charm now.

How do we make this issue as solved?

How do we make this issue as solved?