When we first had our Ecodan installed last year, at least one of the standard temperature sensors was just left hanging. When serviced, I got the original installers to attach them but I’m pretty confident they’re still not in the right place based on the flow temperatures that are being reported.

They’re currently placed at the following points (though I’ll have to check which one is where):

I would appreciate it greatly if anyone with a similar model could confirm where they should be.

The upper point you’ve indicated is where the heat enters the system from the external unit, after passing through the filter. My system has a temperature sensor attached at this same point. So far so good.

The lower point you’ve indicated is the bottom of the low-loss header (aka distribution header) and will be where water returns from your central heating system. This will be the coolest part of the system before it goes out to the heat pump, so might seem a reasonable place to put it.

On my system, the return sensor is placed after the primary pump (the middle one), behind the 3-way valve. In circulation terms, this is a short distance further from where it is fitted on yours, but also includes water from the DHW circuit.

I would suggest that the return thermister (T2) is placed just before or just after the primary pump (P1).
I think there are some pre-soldered receptacles for the thermisters on the pipes already. 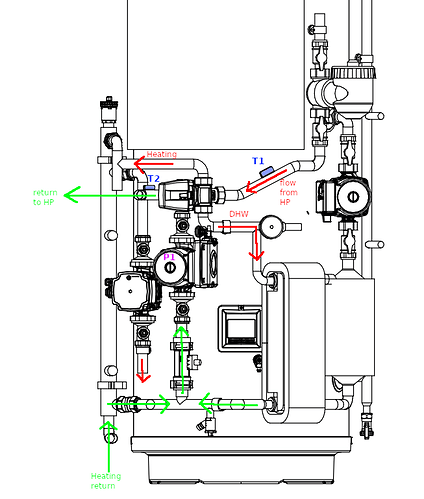 Thank you so much @Timbones.

That’s what I have, yes, with another grey wire going into the bottom of the cylinder (T3?)

@Timbones - Thanks for your help last week.

I double checked the sensors and everything was actually OK. However, the data from MEL Cloud still looks a bit iffy to me: 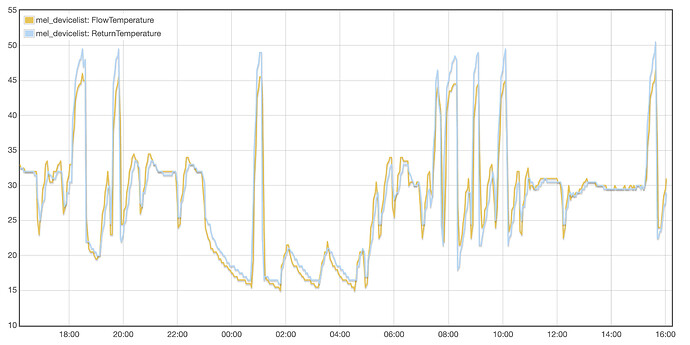 What do your flow and return look like? Are they so close? Do they ever cross over like this?

I’d expect to see a larger gap between flow and return temps (know as “delta T” or “dT”) - around 3 degrees is typical I think. Flow temp should only go below return during a defrost cycle. 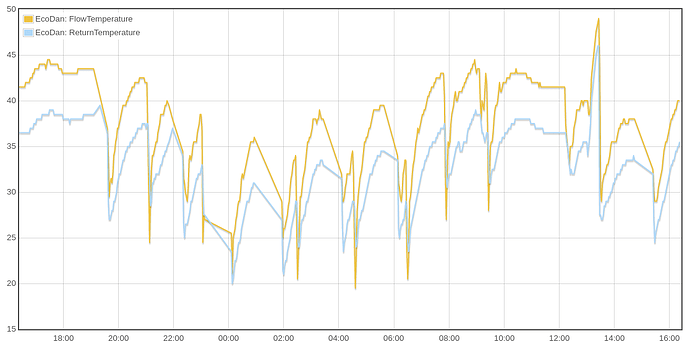 Thanks, @Timbones. I figured as much.

At least I know what I’m aiming for now and will continue to investigate.