Inside the stainless or plated-brass probe ‘sock’ will be a TO92 device that will be probably touching the tip. I have a photo of one that I filed through. Mine is completely filled with epoxy (or potting compound), and the sensor is right at the tip. However, I guess that cheaper versions might not have good quality control, and might simply inject some potting compound on top of the inserted to92. This simply reduces the thermal contact, so slows down response time - only a problem if temperatures change quickly. Does the DS18b20 generate any heat? I forget the figures.
To answer your question. I think the important part is the tip. chromed brass will conduct heat far better than stainless, so heat would conduct more along the probe and even things out. That said, normal attachment methods often have contact with all the probe length.

I have done some tests on different methods of strapping to pipes, including a method of inserting a probe into a 6mm compression fitting for direct contact with the liquid. I must publish this!

I have yet to blog a suggested method of accurate sensing by immersing the probe in the liquid using common plumbing fittings. I’ll try to do that very soon.

I currently have mine cable tied to along the length to the copper pipe that I want to measure the temperature of, but they are giving inaccurate readings. I need to spend some more time experimenting. I do have some pipe clipped sensors as well but not sure of the sensor characteristics. I guess I could use these and then use the feed input to calibrate?

Are you using anything to improve the heat transfer between the pipe and the sensor - like heat sink compound, silicone grease, etc? Have you covered the pipe and sensor with insulation?
My thinking is the heat source is the pipe, and heat transferred to the sensor from the pipe is being lost to ambient, which will lower the temperature seen by the sensor. Anything that will increase the heat flow into the sensor and reduce its heat loss to ambient will improve the accuracy of the reading. (I’m assuming of course that the pipe is above ambient - but the converse will also be true.)

As @johncantor says, immersing the probe is best but, depending on circumstances, it might not be practical.

Yes, use some sort of heat-conductive paste. I now tend to get it in a syringe, and run a line between sensor and pipe. Insulation over pipe… very important. I sometimes cover sensor with kitchen foil, then normal pipe insulation, then foil again in top. Its important to stop drafts going under the insulation. I think you are using the same common sense that I use.

I have finally got around to improving the probe connection to the pipe I am trying to measure. I have taken the forum advice and used thermal paste on the underside of the probe, wrapped around aluminium foil and finally rolled round some spacetherm insulation. All held in place with cable ties. The probe seems to be “stuck” at 85 degrees

I slotted in a digital thermometer and left for five minutes, it is displaying 53 degrees which is what I am expecting based on the thermal store water temperature around this level. 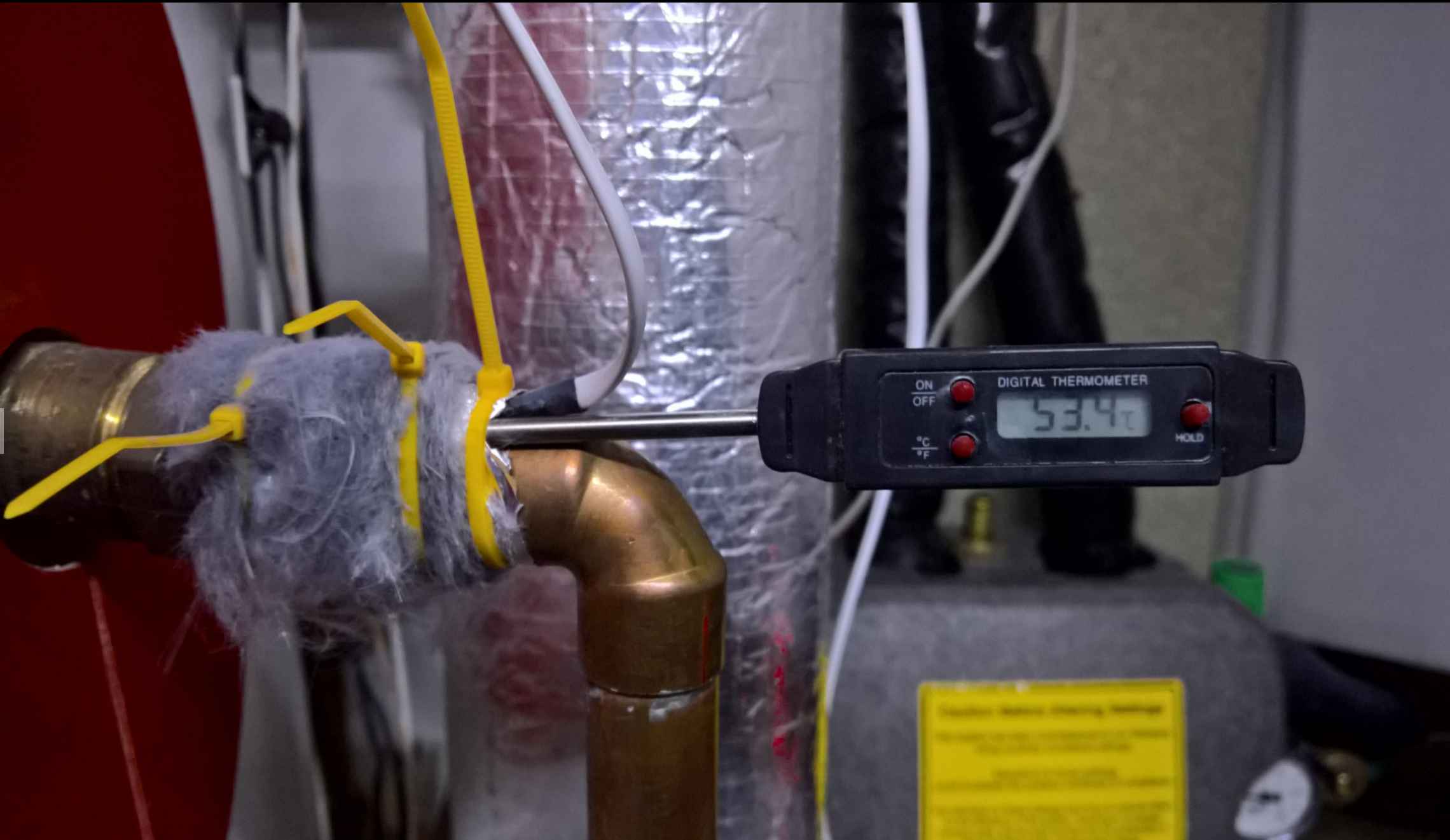 +85C and -125C are fault conditions. Someone else knowledgeable can tell us more

85°C is the power-up state (0x0550) of the scratchpad ROM in the sensor (see page 7 of the data sheet). It probably means that the sensor has not received a valid request to get and convert the temperature. And that is likely to mean a wiring fault. The first thing I would check is the IDC RJ45 connector, if that’s what is in the end of the probe’s cable. Next is the joint at the sensor that you might have squeezed with the cable tie.

It’s a bit surprising that it would respond to the ReadScratchpad (with an 85°C) but not act on the preceding SkipROM and ConvertT commands. If it were a hard wiring fault, you’d expect to get back DEVICE_DISCONNECTED (-127°C) although there’s a bug in some sketches that will cause that to get reported as 25.5°C. (https://community.openenergymonitor.org/t/get-temperature-can-return-a-bogus-25-5c/593)

Another possibility is that there’s a voltage sag during the conversion, severe enough that the sensor resets and so then responds with it’s power-up state on the ReadScratchpad command.

Are you running all 3 wires to the sensor (Vcc, GND and 1-wire)? How many sensors do you have on the bus? How are you powering the emonTx?

I’ve had 85°C from a crimped RJ45 that was a bit iffy. In fact, I think I had just about every possible error state!

Judging from the photo, @PaulB has the encapsulated sensor with an RJ45 on the end. Those are wired in flat 4-core white telephone cable and that’s exactly what I had trouble with. With mine, the strain relief in the plug had broken out and it failed after a few wiggles. I needed to re-crimp the plug to get it working again, so filled the plug with hot melt glue. So far, it seems to work.

Yeh, I guess a dodgy connection on Vcc/GND could cause it to dropout during conversions.

I’m down to the last probe that I purchased. This time I ensured it was working before attaching it to the pipe. All seems good, it read air temperature and dropping it in a small amount of hot water it came down in-line with the digital thermometer. I have attached it to the pipe with thermal paste, wrapped it in foil, wrapped a longer length of spacetherm around the foil. Instead of plastic cable ties I have used Velcro ones and tightened them well away from the probe. The readings seem correct.

In answer to some of the other questions. I was using an RJ45 breakout board but direct connetion to the TX made no difference. I have purchased the separate DC PSU and removed the AC PSU.

Re Aluminium foil, I always use some since shiny surfaces radiate far less, and also the foil can stop drafts getting under foam insualtion, However, foil will probably only make a small difference. some nice foam is important, and I use foil over that too.