Has anyone had any success connecting the open collector pulse output from a Sontex heat meter to the pulse input of an EmonTX v3.4? I have just had an air source heat pump installed and have included a Sontex 449 heat meter on the heat pump output. The heat meter is RHI compliant specification with pulse output rate of 1 pulse per Wh of heat. I have tried both RJ45 connection and direct connection from the heat meter to the GND and IRQ1 terminals on EmonTX but am getting nonsense pulse counts from the EmonTX of around 10 pulses/second even though the meter is not actually recording any heat (and presumably not pulsing). I have successfully connected Sontex heat meter outputs to other monitoring equipment in the past such as Eltek dataloggers and transmitters where there are built in pull-up resistors. The pulse output from heat pump electricity meter (an Emlite ECA2 with pulse rate 1 Wh/pulse) are going to the RJ45 input on my EmonPi with no issues.
Jez

There’s a very long thread here about a similar problem. Have you seen it?

I have been running an Emonpi and 2x TX(v3)s for a couple of years without issue other than the odd self-inflicted one. The units (all shop sourced - including adapters etc- , SD emonSD-03May16, Emoncms 9.9.5 ) are monitoring a stand alone, off-grid system, all AC coupled (obviously with the exception of battery storage) as follows: Emonpi - PV and Wind Turbine generation, 6x temperatures (wired via breakout board and 12m unshielded patch cable) TX3 - Genset generation, three distribution circ…

Robert - thanks for the thread suggestion. I’m not sure it’s the same problem. I have just tired connecting a sensor cable to the EmonTX pulse inputs but with the cable not connected at the meter end (so just bare wires) - and this still gives the same 10 pulse per second response - so perhaps an issue with the EmonTX in my case. When I do the same thing with the pulse input to the Emonpi the pulse input stays at zero - and I can mimic a relay pulse by flicking the bare wire ends together - which are registered properly by the Emonpi. I might try for the solution in the other thread and use a pulse enabled EmonTH.
cheers
Jez

Is your emonTx obtained since October last year, i.e. does it have continuous monitoring via emonLibCM, or does it use the old emonLib?

The pulse input circuit is identical between the emonTx and the emonPi, so my thinking is the internal pull-up in the emonTx isn’t turned on. If you measure the voltage presented to your heat meter, if it’s not a solid 3.3 V (the pull-up resistor is about 36 kΩ - so a DVM shouldn’t load it excessively), then this is what to check.

Robert - this is an old emonTX 3.4.1 bought in 2015 (just after I got the emonpi on the Kickstarter). I should have checked the voltage - just done so now and is only showing 0.1V
Jez

I thought it might be older. Do you have a programmer? Although I think the internal pull-up should be activated, it wasn’t before 25/8/2015, so if yours was before then, this is likely to be the problem.

I think you have two choices: If you have a programmer, you could upload a sketch that does have the internal pull-up activated, or if you have a suitable resistor you could attach to the screw terminal block, that should solve the problem. Anything from say 3.3 kΩ to 100 kΩ should I think be OK (but probably better nearer the lower end if you have a choice), between screw terminals Dig3/IRQ1 and 3.3 V - terminals 4 & 2 respectively.

Robert - both my EmonTX’s were bought before 25/8/15 - so looks like the lack of pull up is the problem then. I’ve got some 10 kΩ resistors at work - but no idea when I’m getting back in the office - so will just buy some off ebay.

thanks for the help

Robert - I’ve now installed the 10 kΩ resistor across terminals 2 and 4 on the EmonTX and it is now working perfectly. Here’s a plot of electric in and heat out (in W) for the system feeding hot water to the cylinder (with supply temperature around 50degC). COP is between 2 and 3 which is what I would expect.
cheers
Jez 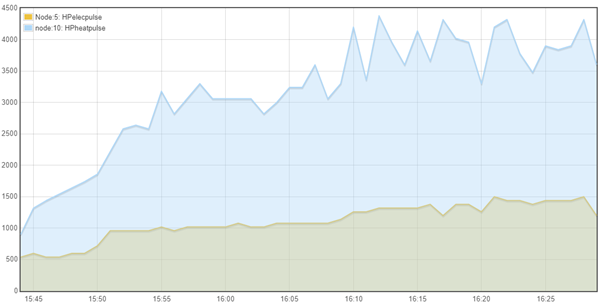 That’s excellent. Thanks for letting us know.