I’ve just noticed that I’ve been getting blocks of missing data from one of my emonTx. Some may remember that I’ve got two - one in the house next to my emonBase and one some tens of metres away in the garage where my mains inlet is. It’s the remote one that is giving blocks of nulls, sometime for hours at a time. 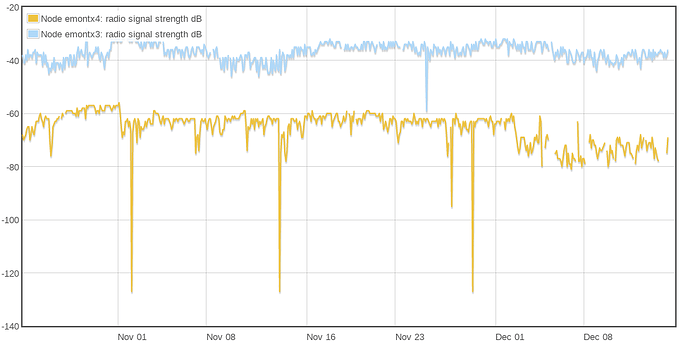 The graph shows the radio signal strength from both emonTx. You may be able to see that prior to this month there have only been brief signal drop-outs, although there are three odd spike reductions in November (there are none prior). But since Dec 5 there are some noticeable gaps in the data.

My immediate thought is that the gaps are due to radio interference of some kind and the only thing I can think of are Xmas decorations, particularly outside Xmas lights. We have several neighbours who are quite keen on them!

Is there any way I can detect radio interference without special equipment? (What equipment would I need?) I’d like to get some confirmation before I go annoying neighbours with my concens.

Thanks for any help, Dave

My first thought would be to boost your transmitted signal strength by fitting a ground plane.

What you don’t want to do is improve reception of the interference by having a ground plane at the receiver - the emonBase.

That emonTx uses an external dipole antenna. Edit: and is wall-mounted.

I assume the neighbours lights are the flashing variety, and we’re assuming they went up on December 5th?
Have you any idea which neighbour is the offender? In what directions from the base are the likely sources of interference compared to your garage?

@Bill.Thomson is the expert on all things RF.

Yes, they’re all flashing, including my own, which went up sometime later. I don’t remember exactly when they went up, but Dec 5 would be the inference of my hypothesis, yes. There may be multiple sources of interference of course.

I don’t know which neighbour. We have fields to the east and south of us. My lights and emonBase are to the south of the garage. All neighbours are either east or north of us.

I don’t know how effective this might be: maybe a sheet of earthed reflective material (foil-backed insulation, chicken wire, or similar) behind your emonBase as seen from the garage direction?
Let’s wait for Bill.

The first thing that got my attention was the ~10-15dB drop in RSS just after 1 December.
So while it may indeed be the Christmas decorations doing the dirty deed, that might be just
part of the story. There’ shouldn’t be a problem with an RSSI of ~-70dBm, but that combined with
the Christmas lights may be a problem.

Is there any way I can detect radio interference without special equipment?

There is a low-cost way to do that.

What equipment would I need? 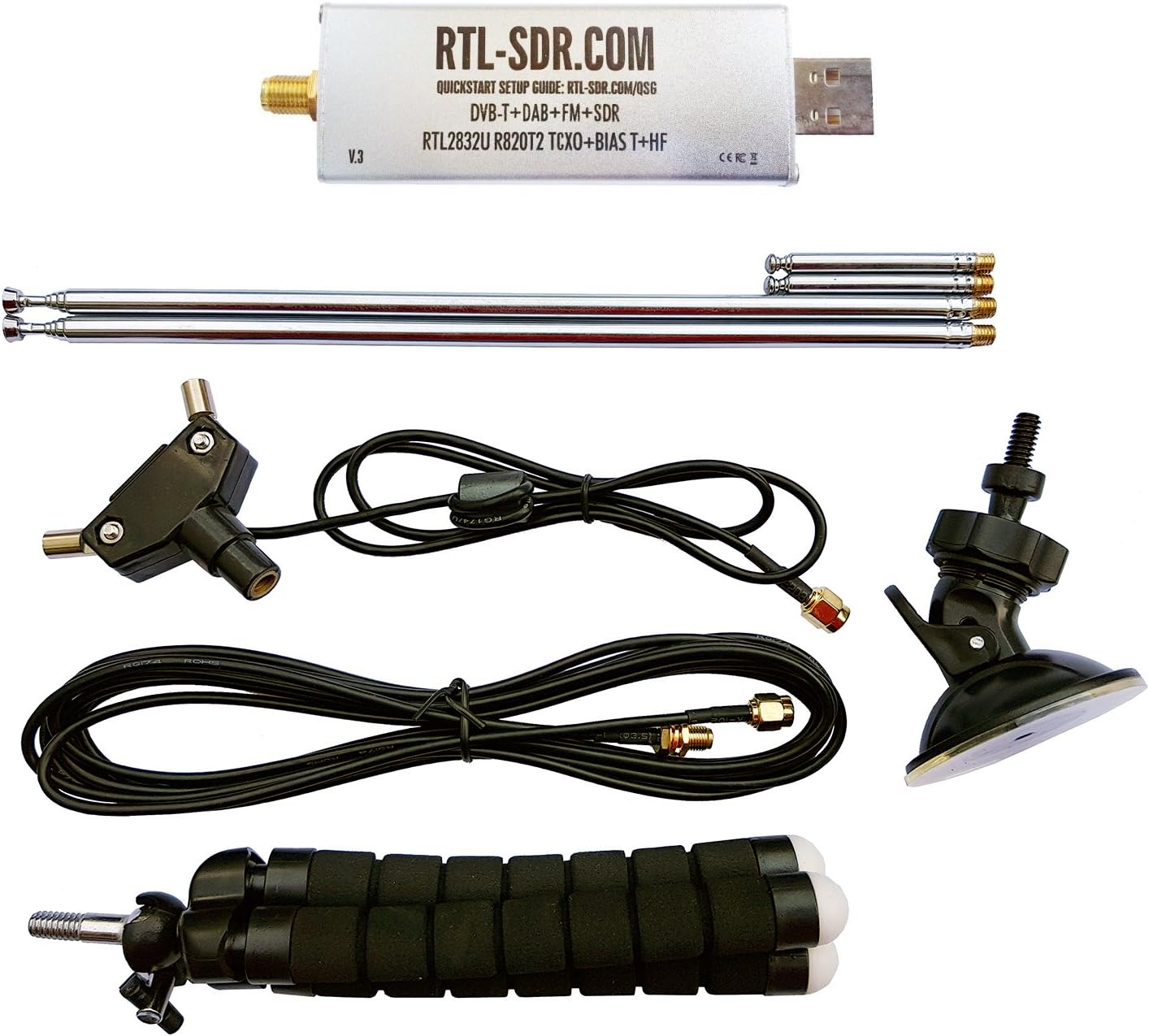 That would enable you to check the RF spectrum from 24MHz to 1.7GHz.

That emonTx uses an external dipole antenna. Edit: and is wall-mounted.

We have several neighbours who are quite keen on them!

Know what you mean there. These are in my front yard:

The first thing that got my attention was the ~10-15dB drop in RSS just after 1 December.

I hadn’t even noticed that. So maybe my hypothesis is wrong or more complicated. Still, it makes me even more keen to investigate the source.

The antenna is one of these https://www.amazon.co.uk/gp/product/B07DNLBHH6/ I looked at it this morning and it still seems to be positioned in the same place.

It’s available on Amazon in the US but not here in the UK. The US site will ship to me but I think it will be easier and cheaper to order from Aliexpress. Thanks for the link, though, I’ll order one. Again it’s obvious what the solution is when you already know

Ah, HDSDR is Windows. I run Linux so I’ll need to look at something else. The first few are:

There’s GNUradio and rtl-sdr packages in the openSUSE repositories as well as various other hits for SDR, so again it’s a question of [not] knowing what I’m looking for. I see there are various web pages about using SDR for interference analysis on linux systems but any known-good resources would be very helpful.

Of those, I’m only familiar with gqrx but it can do what you need.

Also look out for rtl_433 which is capable of decoding many devices on 433 (and 868) MHz. I use it together with a bit of python to feed my emonPi with data from some CurrentCost power monitors and a weather station.

4 posts were split to a new topic: Using rtl_433 to get weatherstation data

It’s available on Amazon in the US but not here in the UK. 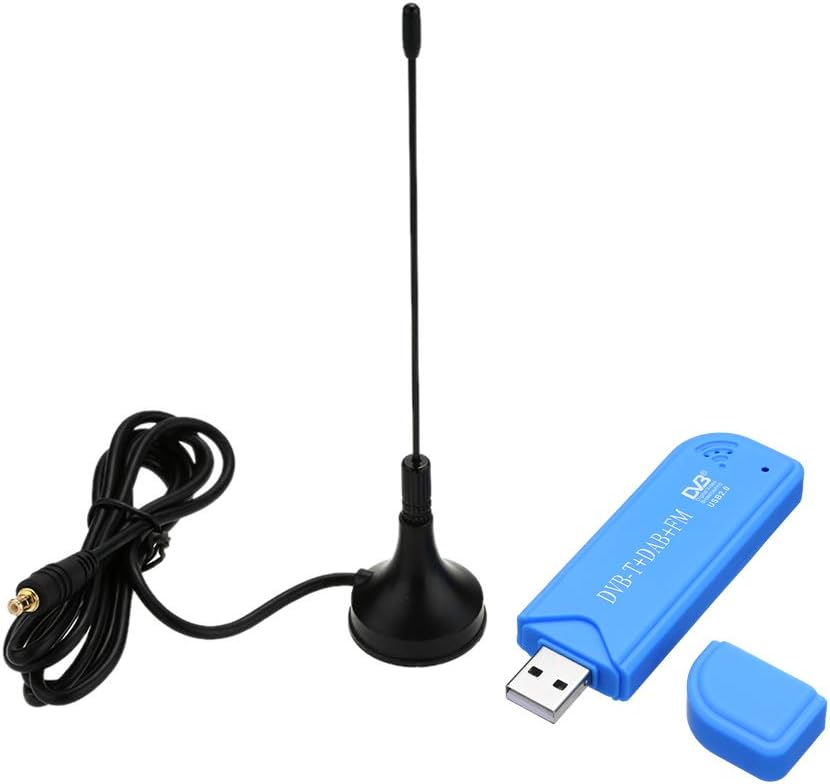 Do you or anybody else have any experience with them

I’ve not run any of the Linux variants.

Are there specific features in a package that would be good to have?

Any of the avaiable apps will be able show you the RF spectrum at/near 433 MHz,
so the choice ends up being a personal one.

The display will be similar to this:
What you’re looking for is signals at/near 433 MHz. e.g.:
(this example shows the HF spectrum at 7.162 MHz) 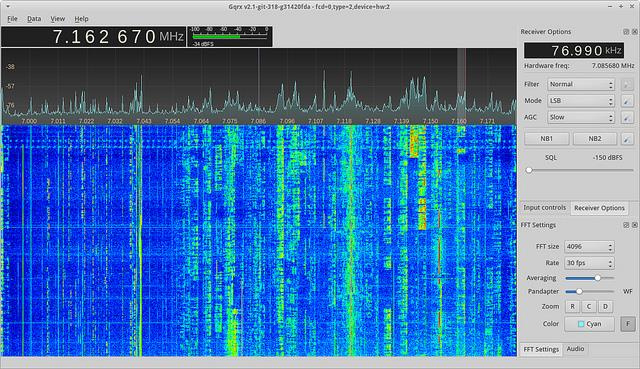 In particular, this part:

will show you what signals it’s receiving, their frequencies, bandwidths and relative strengths.

The antenna is one of these

What I was hoping for was a picture of it as installed.
It’s actually fairly easy to “detune” one (read that as decreased performance)
if it’s not located and mounted correctly.

rtl_433 is aimed at decoding data from various personal weather stations and the like.
While it’s something he might want to look into later, ATM his need is for a simple spectral
display to detect any signals that may be interfering with his OEM system.

This should do the job

How would you use the Andoer unit, since it seems to have an omnidirectional antenna? My main question would be about software support for it though since it only mentions Windows. It looks vaguely interesting as a toy since I run TVH with a TBS 6805 quad tuner.

What I was hoping for was a picture of it as installed. 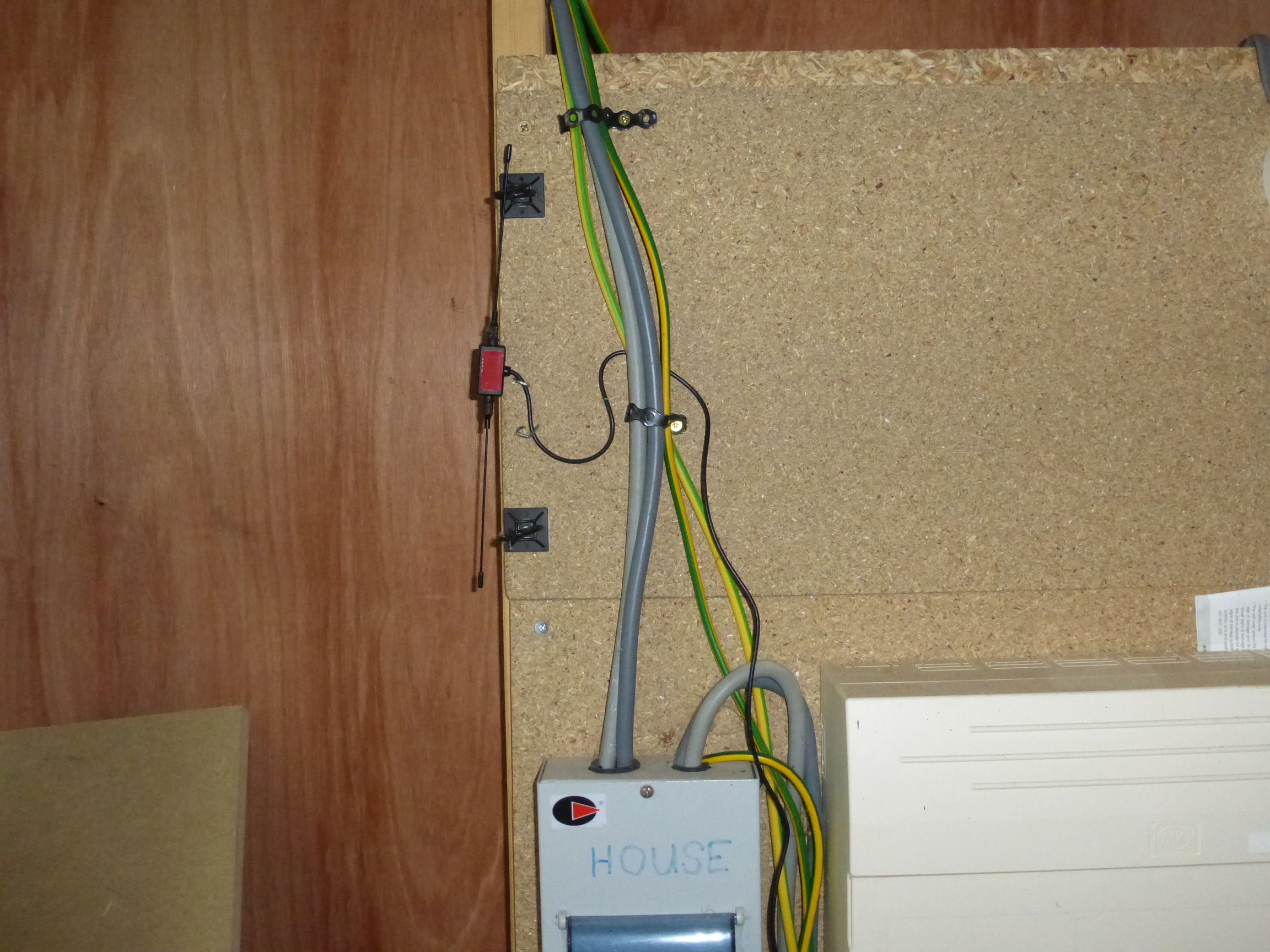 The view is looking west. North is to the right and south, where the base station is, is to the left.

How would you use the Andoer unit,

since it seems to have an omnidirectional antenna? 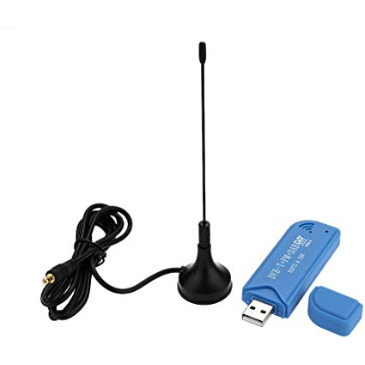 Many of the of the low end SDRs are based on the RTL2832U chipset and
R820T / R820T2 tuner which is the chipset/tuner combo supported by much of the available software.

It looks vaguely interesting as a toy

The same can be said WRT almost all of the USB dongle type SDRs.

There are some exceptions, but they don’t carry a 20 dollar price tag.
Airspy (169 USD) and SDRPlay (99 USD) are two examples that come to mind.

The RTL-SDR.com V3 receiver is one of the better low-end units.

OK, that helps. Quite a bit.