I thought people here may be interested in a new energy meter project that uses EmonCMS. It’s designed for monitoring electricity usage in your entire home. It’s a lot like emonPi, but has a dedicated energy monitoring IC (the ATM90E32), and can use any Arduino style MCU. I previously got some advice on this forum when I was designing it. Thanks for that! 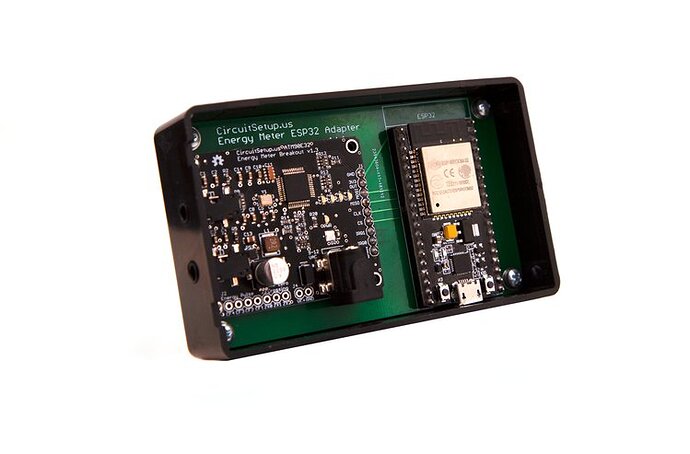 Currently there is a campaign running on CrowdSupply and would appreciate the support!

If you really want one now, I can make you one from the last batch 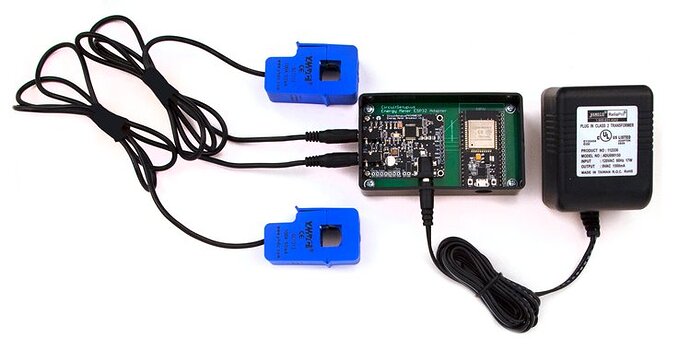 I’m curious about one thing though.

The wire windows in the CTs you’ve chosen are too small to fit the 4/0 Service Entrance Wires typically found in a US residential load center. (assuming whole-house vice branch circuit monitoring) Is a suitable substitute available?

I’m glad someone finally noticed this! I realized that most newer homes are 200A and have aluminum (not copper) service mains after the pictures were taken of the SCT-013 CTs. In the description this was changed to the SCT-016, which has a larger 16mm opening, rated for 120A, and will be ordered with 3.5mm plugs.

Given that most of the users here are not in the US,
I’d say that’s not too much of a surprise.

I noticed your project uses the same energy IC Tisham Dar (whatnick) uses in his energy monitor.
Any connection there?

Almost the same IC. His uses the ATM90E26, mine is the 32 (which actually has 3 current channels, but I’m only using 2) Although I think he did make one with the 36. He had posted Arduino libraries for all 3, but the 32 wasnt quite finished. I finished it, and configured everything for 60hz US power, to work as split single phone, and work with EmonCMS.

to work as split single phone,

I take it you mean split-phase vice phone, yes?

At any rate, a big thumbs up to you sir!

Whoops, yeah, split single phase. Was typing on my phone

I’m curious as to how the AC waveform looks when that 220uF cap starts conducting. If you look at the corresponding OEM design:
https://github.com/openenergymonitor/emontx3/blob/master/hardware/schematic.png
you’ll see they went to some effort to reduce the size of the divot the DC supply puts into the AC waveform so as to limit the distortion seen by the V measurement.

Sorry I initially overlooked your post! Luckily there are anti-aliasing caps on all inputs. The AC signal goes right from the AC transformer input, through a voltage divider, and to the IC for measurement. The 220uF is after the half rectifier, and before the SMPS.

This is from the cap right before the voltage input (C5 - VAP): 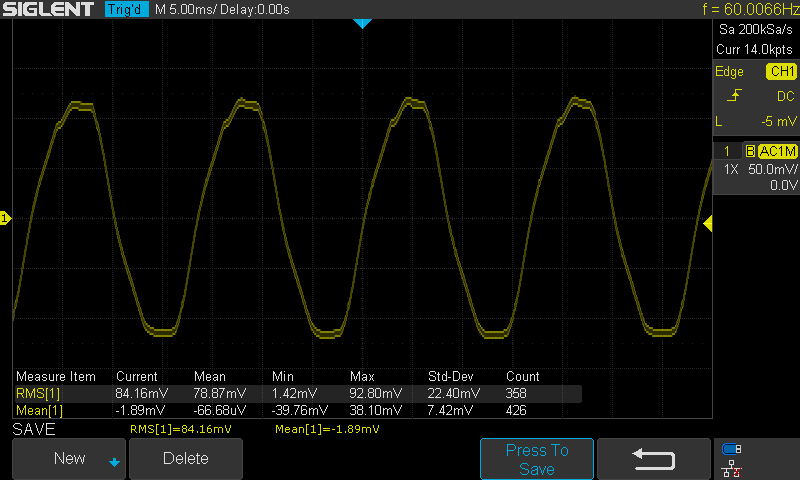 I was looking at the site, and the differences table…

Is there any summary that can tell me simply why this is better/different then an EmonPI/TX?

I suppose this is just for monitoring a panel? Does it have a pulse sensor?/Can it?

To put it simply, it can calculate more data, and do it in real time. It’s also smaller and cheaper in price.

It does not have a pulse sensor since it doesn’t rely on your meter, but current transformers to read current directly from your panel. It does have its own pulse outputs though.

@jdeglavina does it only work with split phase? What about just a device/any device?

How did you get it to use just one power supply, does it not need a reference voltage anymore?

Yes, it can monitor any 2 current channels. It has “Split-phase” in the name because the kit comes with 2 current transformers that can monitor 120A each. You can connect almost any CT rated at 200 Amps (or less) to it.

The AC transformer signal is run though a half rectifier, before going through an SMPS to output 3.3V DC. This is what @dBC was asking about above in a different way.

Is that scope image a plot of the voltage that goes to the measurement IC?

It has “Split-phase” in the name because the kit comes with 2 current transformers that can monitor 120A each.

It would be more accurate to say it has split-phase in the name because that’s what the US
residential electrical system is called. It’s a single phase, split into two “legs.”

2.4 kV has largely been superceded by 7.2 kV, but there are still many 2.4 kV systems in operation,
especially in small towns.

The center tap is grounded to earth at the transformer.

I mention it because an emponPi/emonTx can use two current transformers.
(the “Tx” can use as many as four CTs)

This is from the cap right before the voltage input (C5 - VAP):

That’s a fairly distorted sine wave.
I too, am thinking that can’t be too good where accuracy is concened

Honestly, I get a similar sine wave directly off of the AC transformer. I’m sure it doesn’t help that my 3d printer was running. Actually, I’m positive that contributed to noise.

OK. But how similar?