Ever since we launched the emonPi we have always wanted to make the first time setup process as easy as possible for new users.

We have just made significant progress in streamlining the setup process by enabling the emonPi / emonBase to broadcast a WiFi access-point (AP) on first boot then scan for local WiFi networks and allow the user to connect. The emonPi will then turn off it’s AP and connect to the local network. There is also an option to connect via Ethernet or stand-alone WiFi AP mode when no local network is available. 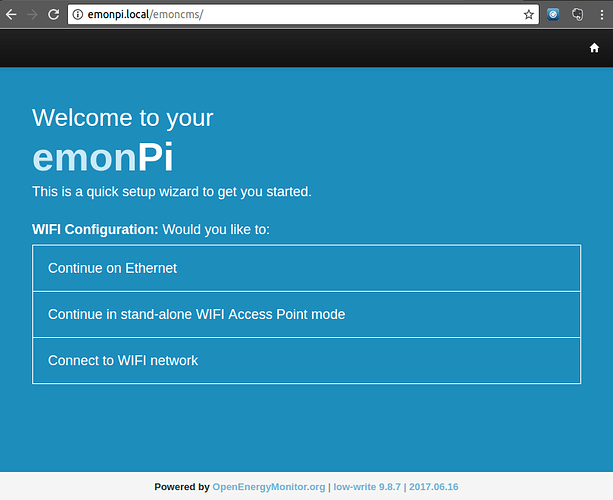 This has now been made possible using the Raspberry Pi 3 which supports WiFi access-point AP mode, some bash scrips and a new emoncms-setup module.

The new Network Setup Wizard will be included on all new purchased in July 2017 onwards. Existing emonPi’s with a Raspberry Pi 3 can be updated by running Admin > emonPi update in Emoncms. The emonPi will only broadcast a WiFi AP if Ethernet is not connected and no WiFi setup is currently present.

@TrystanLea is also working on making the input-processing setup for new devices easier by adding device template support to the Emoncms Device module. More on this the come, see dev forum thread:

Over the last couple of months I’ve started to use @nchaveiro’s device module introduced originally in emoncms v9 and now available as an optional module. I’ve made a couple of modifications to make it possible to create and initialise a device from a device template by sending a ‘describe’ property alongside other node input data, and in the last week I’ve made a start on integrating device configuration into the emoncms input user interface itself. I’ve been wondering for sometime if the grou…

Here are a few more screenshots of the new network setup wizard: 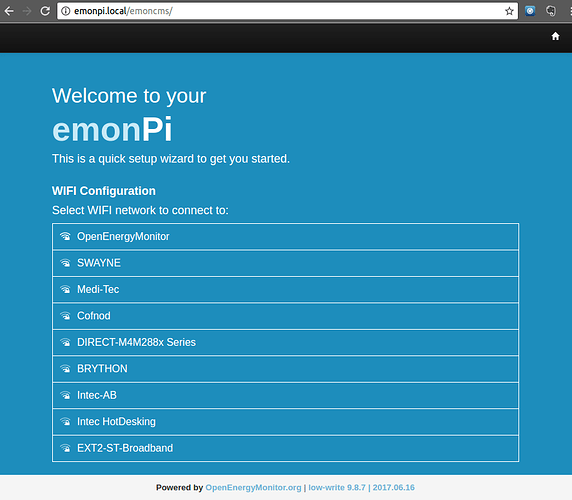 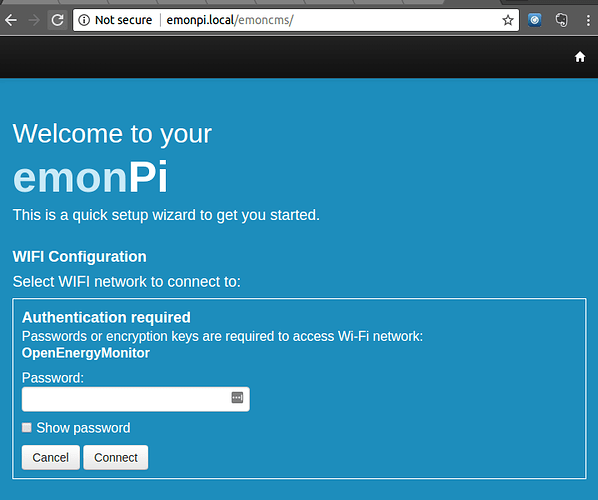 The Setup Guide has been updated for use with the new Netork Setup Wizard.

looks nice… I just have a small request: Please make it possible to manually input the SSID (for hidden SSID) yes I know nag nag nag… just saying it would be nice… I need it badly because we have made the first step of monitoring all our equipment at my workplace…

So far we have bought 11 EmonPis, 2 EmonTx3s and 4 Heatpump monitors…

Currently you will need to enter the wifi manually into wpa_supplement.conf.

I’ll take a look at integrating the ability to manually enter an SSID into the wizard. Also need to add the ability to enter a static IP network configuration.

hi i have currently setup the emon pi using my parents internet but as im not there all the time I brought the emon pi back to mine so that I could get familiar with it. is there any way that i can get it to broadcast the wifi ap? or is there any way i can connect my laptop to it to update the wifi settings?

hi i have currently setup the emon pi using my parents internet but as im not there all the time I brought the emon pi back to mine so that I could get familiar with it. is there any way that i can get it to broadcast the wifi ap? or is there any way i can connect my laptop to it to update the wifi settings?

easiest way would be to connect it to the router via Ethernet then logon to local Emoncms and setup wifi using Setup > WiFi in local Emoncms.

+1 on configuring a static IP, while we waiting for the GUI to do this, can it still be done in the config files of the Raspbian, manually ? Happy to ssh onto the unit and configure it that way.

if not via config files, I can do a MAC address to IP Bind for now, giving me a static.
After initial deployment, can the IP be change though? Would this just be a OS level change or does it have to be done via emonPI Interface (aka the IP is stored in other places also which have to be updated).

I’m not sure of the procedure to do this, however the emonPi wifi module is just the last level on top of the standard raspberrypi networking stack. The WiFi module writes to /etc/wpa_supplicant/wpa_supplicant.conf https://github.com/emoncms/wifi/blob/master/wifi.php#L166.
We do lower level configuration for creating the WiFi access point, which is all documented here: emonpi/wifiAP at master · openenergymonitor/emonpi · GitHub

Searching for configuring a static IP, I came across this stackexchange thread which may help:
https://raspberrypi.stackexchange.com/questions/37920/how-do-i-set-up-networking-wifi-static-ip-address

If you get it to work, please feel free to share here, as Im sure it would be useful for others.

I’ve hard coded IP’s before on the RPi. so if Emon just sits on top of whatever is configured at a lower OS level then awesome, easy enough.

This intrigued me so I had a look as well.

If it was done on the image file it may well work for all (untested).

In essence you are right…

However, Martin’s guide was written a long time ago and the standard Raspbian image has moved on to allow the wifi settings to be introduced to an image by adding a wpa_supplicant.conf file to the /boot partition before placing it into a Pi and that gets moved to the right location at boot up.

So to avoid the symlinkling being undone at first boot (the /boot copy moved into place deleting the symlink) you must use a different file name eg “wifi.conf”. See Wifi config on Pi Zero using emonSD and Using wpa_supplicant.conf file on the emonSD boot partition - #27 by bernamorillo discussions as this has been suggested, tried and tested before, but AFAIA not adopted on the emonSD image. It not only allows pre-configuration on a Pi, but in doing so it accommodates the Pi zero too, without impairing the existing emonSD setup (re RO OS and wifi module, untested on latest image)

Of course, if you use DietPi then setting all these things pre first boot is as simple as.