When my EmonPi was installed I posted this thread to ask about the unusual data shown by EmonCMS when the Immersun controller was diverting power to the immersion heater. I did some tests and I’m satisfied that the Immersun is operating correctly despite the spikes shown on the charts.

will the EmonTX and the existing EmonPi synchronise so that they take their samples at exactly the same time?

No, that’s not possible with the Emon system as it stands. Both default to 10 s between readings, but there is no standard mechanism to synchronise the two. Both radio modules (in the emonPi and the emonTx) are capable of transmitting and receiving, so it would be possible for the Pi to command the emonTx to take a reading, or it would be possible to instruct the Pi to take a reading when the reading from the emonTx was received. But as far as I know, nobody has done that. The nearest was MartinR’s “Full fat” 3-phase monitor, where one master emonTx V2 commanded two more piggy-backed on it, via a serial link, so that all three read at the same time. (You should find that in the old forum.)

If an EmonTX v3 is installed in the airing cupboard next to the immersion heater,

is the immersion heater feed on it’s own cable back to the dist board or does it share with another circuit? If you can measure the diverted power at the other (dist board) end, you could use an emonTx in place of (or as well as) the emonPi and use 3 ct’s on the same device (emonTx) so the readings are synchronized. You can still use the emonPi as the emonBase (emoncms server etc).

One node to sense them all!

I achieve this with a single node monitoring mains,solar and immersion at the consumer unit.

My diverter insists on a dedicated immersion circuit. My house is modern so this was already in place. So monitoring can be at the consumer unit.

For current hardware a suggestion is…

This is a ‘full fat’ version, with all the emonPi goodness, of my more modest setup (I had a small budget!)…

My ‘use without immersion’ is calculated from the relevant inputs in a feed in emoncms.org.

I wish you well getting it working.

For those intrigued to see my setup it looks like this… 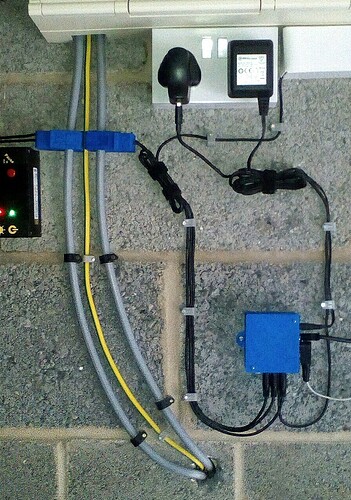 It has an emontx v2.2 with 3 CT, Temperature and Pulse for a gas meter in use. Data is sent over serial wire to an openWRT router. A script on the router packages up the data and sends, via my broadband router, to emoncms.org. The emontx is doing the clever sensing stuff. emoncms.org the clever data presentation.

emonTx and router are both in the blue ‘emonWRT’ box which I bought online. The left blue CT sensor is the diverter’s sensor, the emontx ‘immersion’ sensor is inside the black diverter enclosure on the left. The emontx solar CT is inside the white conduit at the right, the right emontx CT sensor is, fairly obviously, on the mains.

Thanks. I was planning to locate the EmonTX in the airing cupboard because my consumer unit is in the cloakroom. The consumer unit, the Immersun, the EmonPi, and the solar generation meter is enough clutter on display on one wall without adding an EmonTX as well.

The immersion heater has its own circuit, so I will install a third CT sensor near the consumer unit and connect the three CT sensors to an EmonTX. The EmonPi can be removed from the cloakroom and put somewhere out of sight.