My EmonPi was installed on Monday, and it’s now working nicely.

I have an Immersun unit to divert surplus solar power to my immersion heater. Although the energy usage approximately tracks the solar generation, it appears that 20-25% of solar generation is being exported and the same amount of energy is being imported again. Does anyone else have an Immersun, and if so does yours produce the same results as mine? I don’t know if this is usual behaviour, or if there’s something wrong.

I’m not at home today, so the house shouldn’t be using any power apart from the immersion heater, the fridge freezer, and the broadband router and similar gadgets.

I assume the base line at something below 100 at around 10:48 is your router etc, and the one at around 400 that appears every 3-4 minutes or so is your fridge-freezer. Therefore I’d interpret the peaks as being the immersion heater. It may well be correct operation and it’s looking for a long-term zero energy balance - Immersun have until now been fairly tight-lipped about the details of their product, but it doesn’t look right to me and it’s certainly not how the diverters published here work. Both MartinR’s and Calypso_rae’s would achieve an exact balance (zero grid power transfer) within the meter’s averaging time.
Just one point that’s maybe confusing the issue - I assume you’re not using their diverter sketches as your feed to emoncms? The ‘discrete sample’ sketch, which is what I assume you’re using, will, by its very nature, give an erratic record of power if there’s something that switches rapidly (and I don’t know how the Immersun controls the immersion power, so that could be a factor) because it samples for 200 ms every 10 s and assumes that this sample is representative of power over the period…

A thought - You might like to turn your divert off for a while and confirm your setup makes sense without it. This should isolate if the peaks are your diverter as they would cease.

My experience with monitoring a commercial Solic 200 diverter is that the divert closely tracks the solar output. So if your immersun is spiking I too think it very odd.

I have a CT on my diverted output so can ‘see’ how much it diverts.

Here is total use 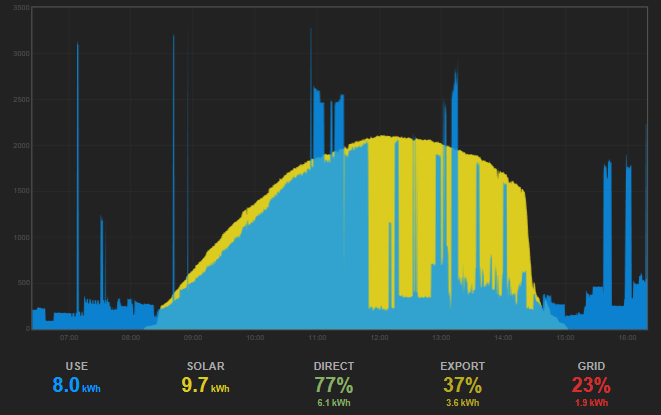 And for the same period graphed with the divert output removed 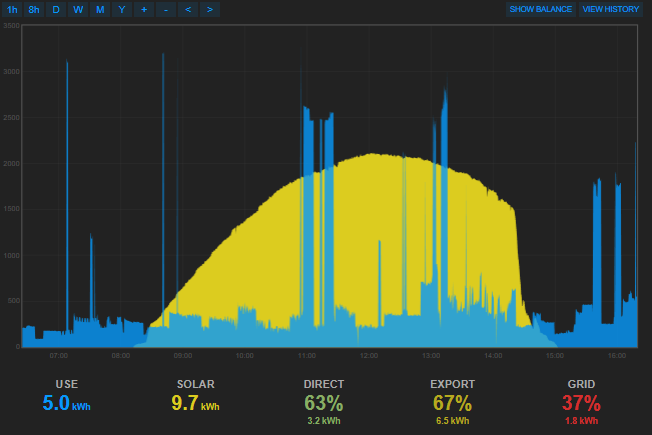 You can see the divert tracks the solar (but not very close!) and comes to an end when the water is hot enough.

The Solic 200 uses a single CT and appears to be an Arduino type solution. My emontx realpower values and it seem to disagree about the total solar available!

Apologies if my rambling is not helpful! Back to immersun…

Robert, on the chart I posted the base line at 60w is the router etc, and the rest of the usage is the power diverted to the immersion heater. When the fridge-freezer is running it only uses about 90w.

I’ve just bought the EmonPi and I haven’t made any changes apart from following the setup guide, so it will be using the default sketch.

IanV, Thanks for posting the chart, that’s the sort of usage I was expecting to see from the Immersun.

The other outputs from EmonCMS look right. Here’s an example of the readings overnight, when there’s nothing on apart from the routers and the fridge-freezer.:

The EmonCMS figure for a day’s solar generation matches the generation meter. I’ve tried turning appliances on and off while watching the usage chart, and the data look very convincing. I’ve put the Immersun into manual boost mode, and the chart shows a block of constant high usage like you’d get from a kettle, so the Immersun output is read correctly when it’s at full power. The only thing that looks wrong is the usage when the Immersun output is at less than full power.

Robert’s information on the power sampling period is useful. It may be that the Immersun is adjusting its output too quickly for the EmonPi’s sensors to read, or pulsing its output rather than dimming it. I’m going to have to wait until the next time there’s sufficient solar power for the Immersun to start diverting power, and then go and watch the import meter to see if it moves. I’ll post an update when I’ve been able to do this; the weather for the next few days isn’t looking too good, so it might take a while.

If your Immersun is the sort that has the high frequency chopper in it (they call it Trusine, I call it ‘Class D’), then it’s probably not switching rapidly in the sense of on and off periods in the 0.1 - 10 second range, but it might still be varying the power over a large range but ramped fairly slowly so as to avoid flicker and so that the nett import over a longer time is slightly positive. As I said, I don’t know their control strategy, and I doubt they’ll divulge it in a hurry. If you’ve proved to your satisfaction that the monitoring system is behaving as it should, then if your unit doesn’t match the advertising claims and it concerns you, you could take the matter further. 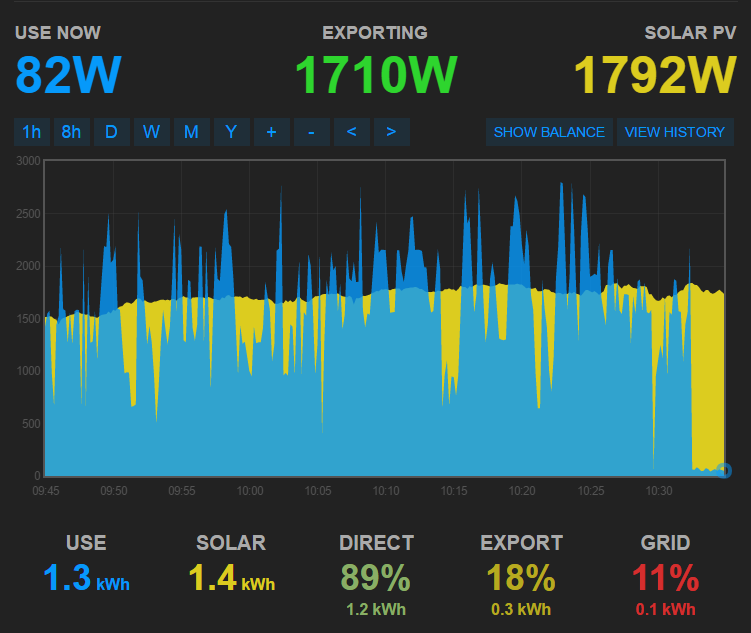