This is another topic that’s not directly about controlling the heat pump like the one about giving people control. It’s in response to @johncantor’s comment:

when gauging ‘comfort’ rather than air temperature, it all gets more anecdotal

I’ll start by saying It Works for Me ™.

Firstly the most pertinent fact: We don’t have a room thermostat.

The one we had with the oil boiler was terrible. The one installed with the heat pump was horrible to program and doesn’t have a “delay” to stop cycling. It does have “minimum on time” (say 5 mins) and “max cycle rate” (say 3 per hour) but that doesn’t help because it would just be off for half an hour. We’d want to say “on for 5 mins, off for 15” for example.

For temperature control we are using programmable TRVs on each radiator. Nothing too clever, just manually configured time and temp. For example, one of the bedrooms spends most of the time at 15 Celsius whereas my office is 23 Celsius and the shower room is 25 Celsius. Of course this plays havoc with the energy-demand calculations which assume a common temperature across the whole house. The TRVs could theoretically all shut down at the same time so the heat pump has a bypass valve just in case.

Ironically, whilst I’m writing this I’m a smidge chilly and I go ask the system why and I see it’s just turned itself on

It has been cold enough to turn on the heating - the return temperature is currently 26.0 °C

Given all the above, the obvious question is “are we warm enough?”. Strangely the answer is always “yes”. It’s a bit frustrating because I want to tinker, but the residents keep telling me it’s fine. Even visitors look non-plussed and say they aren’t too hot and they aren’t too cold, it’s just right. No, they don’t have blonde curly hair.

Here’s some charts of room temperatures. The “currencost” and “pywws” sensors in my office are actually touching each other but still have different readings. The red temperature trace is from the machine room. The redundant room stat sat on my desk right now says it’s 22 Celsius and often says 23 (as desired by the TRV).

When we’re talking to technical people about the system behaviour they often ask what temperature the house is at so they can determine how “normal” we are. I can’t give a straight answer because it depends on time and room.

I can at least confirm that a strategy based on flow and return temperature can work in a house with a heat pump and lots of TRVs.

One thing we’ve had to change is our perception of the desired temperature on the TRV. It’s an upper-bound not a guarantee. The room may in fact not get up to the temperature set on the TRV if the flow control algorithm decides it’s not worth carrying on. Our TRVs don’t call for heat. Having it set to 25 Celsius won’t keep the heat pump running whilst pushing that room really high, it just means that the TRV is likely to stay open all the time.

Here’s an example of the hysteresis in action. It’s a bit windy and damp at the moment.

The delay is also temperature dependent so the cooling from the wind is making the delay shorter.

It hasn’t been cold enough to turn on the heating - the return temperature is currently 26.5 °C but it needs to be below the minimum temperature of 27 °C for another 422 seconds 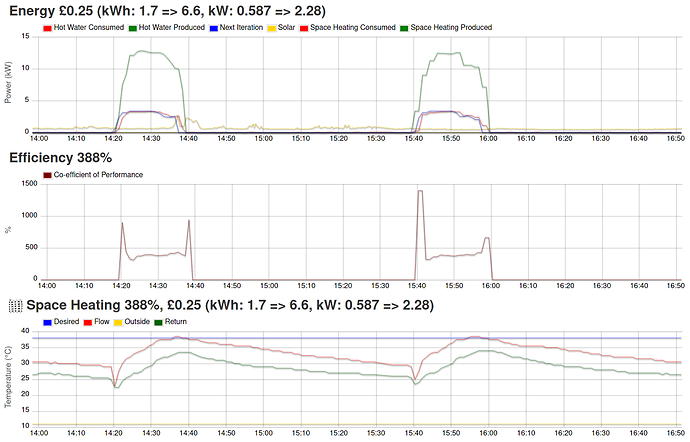 You can see we have long runs where the heat pump is off which is helping improve efficiency because it’s not having to heat already-warm water and the pumps run much less.

Ooh, I wish I’d read this report a bit sooner, Robert Green and Tony Knowles wrote this for the Energy Saving Trust in 2011:

It says the same thing as I was saying above and in:

As we all know, the most efficient way to run a heat pump is to keep it running all the time. However, I’d like to propose an alternative. I think there’s a case for turning them off. Here’s 2019-10-26 - the average temp was 9 Celsius. We can see in the evening the pumps we on all the time and my records show the system was flipping between heating and anti-freeze. This is a good example of why I split space heating and hot water in my efficiency analysis. The hot water usage is sporadic and …

Specifically, as long as you can get reasonable runs, the CoP is fine with TRVs.

In my case I have a really big drop in return temperature so my cycles are infrequent and long.

A little searching turned up this:
https://www.hpac.com/heating/article/20927877/thermal-comfort-more-than-just-air-temperature

That’s pretty nice @Bill.Thomson - it fits with what we’re seeing here. It’s why I am about 30cm from my radiator and I notice when the temp has dropped and the system is about to kick in again. The thermometer on my desk is about one metre away and doesn’t fluctuate even though I’m aware of the variation.

It’s also why we (whilst laughing) vetoed having a large granite or steel window sill right next to the kitchen table. We use lots of wood in our house to help it feel warm.

I’ll take a deeper look and see if indoor humidity should be included in my revision of the “low point” I’m using to boot up the system.

Good call. I’ve got three steel doorframes in my house (I’m on SW Oklahoma)
and they aren’t worth a Tinker’s dam.

I’ve got a dining room table that’s a solid slab of Kiowa Blue Granite 84 inches long by 39 inches
wide and 5 inches thick. It keeps that room fairly cool during the summer, although we don’t spend much time in the room during the colder parts of the year. (the room is too far away from the woodstove)

Ummm, what pictures are you speaking of?

Don’t worry, I haven’t hacked into your nanny-cam

I haven’t hacked into your nanny-cam

That’d be a good trick, especially since I don’t have one.

No… That particular type of Granite has much more red in it. Kiowa Blue is quite dark
with light-gray to white streaks. The granite in the picture comes from an area that’s about
800 miles north-north-west of where mine was quarried from.

This is vaguely interesting.

It’s night time and most of the TRVs have programs that take them to low temperatures. I’m a bit chilly in my office and the schedule is keeping the heat pump off.

I manually set a low flow temp and turned it on.

The control algorithm picked a higher flow temp (because it’s warmish outside) and away we went.

It’s a pretty short run time which fits with our expectation that there is less water volume to work with. We can see the flow temp ramped up quite quickly. 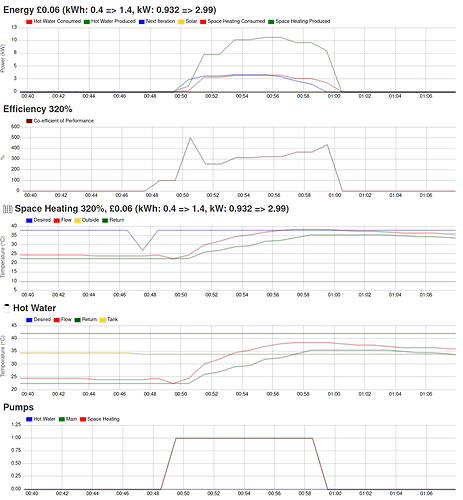 Here’s a similar run starting from the same sort of temperatures in the daytime when more TRVs were fully open. 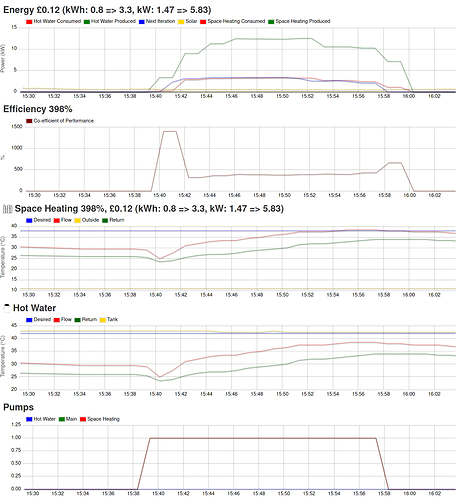 Hopefully this is interesting to someone. I’m finding the app for exploring experiments to be quite useful.

Here’s a shot of the monster “heat sink/store.”
A “counter top” of 1.75 inch thick Oklahoma Red granite is visible in the upper left of the picture.
That slab is 8 feet long and 2 feet deep. 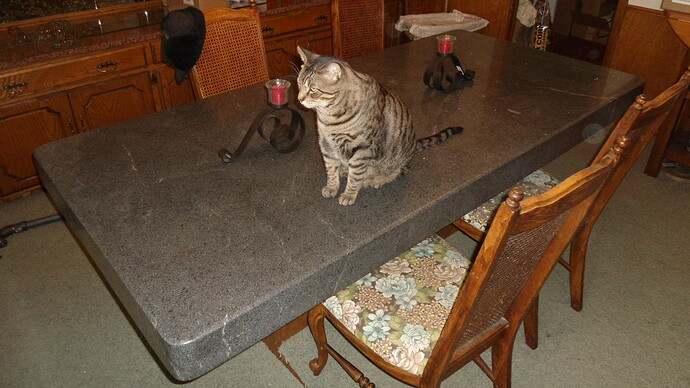 most of the TRVs have programs

What programmable TRV do you have?

@borpin Some cheap and cheerful Pegler Terrier iTemps I got about 10 years ago.

When we got the ASHP the installer put regular manual TRVs on the system. They were willing to try the more complicated thing, but I wasn’t familiar with ASHPs so I wanted to run it with the simple setup for a while to see how it behaved. I think it was about two weeks before I switched to the programmable TRVs because it was making no sense heating rooms all day when they only needed heat for two hours in the morning. For example, one of the bedrooms is 15Celsius all day except for 06:00 to 08:00 when the occupant is get dressed. Ironically it only takes them about five minutes to get dressed, but it needs to be warm for that five minutes. I suppose we could have a “dressing room” in the house that was warm more of the time

I have seen some advice with the clever new-fangled TRVs that they shouldn’t be used with heat pumps and I understand their concern, but the report from the energy saving trust and my own experience suggests it would be OK, as long as you design things to avoid the short-cycling. I suspect the TRV providers don’t want to be blamed for causing the short-cycling.

Part of the reason for me publishing my research is to try and get us to a world where the ASHP flow controllers get smart enough that they can cope with things like programmable TRVs being fitted without the end-user having to worry. It’s why I’m “open sourcing” it by publishing it here…I want all of the manufacturers to be able to improve not just one or two that I could have sold it to.

I suspect the TRV providers don’t want to be blamed for causing the short-cycling.

You are probably right.

Yep, Radbot was the one I had in mind. Specifically they say:

I have a soft-spot for radbot because my daughter has been on stage with Adam Hart-Davis so I want Damon to succeed. I love his openness on what they are doing.

Now that I’ve done my experiment with TRVs I might get in touch with them and see if they want to change their advice. I’m not ready to do that yet though.