I was preparing to upgrade from emonSD-29Mar16 to emonSD-03May16 and I happened to look at crontab -l. I saw 4 lines for service-runner.

I think this happened when I clicked on Setup > Administration > Update emonPi and ran the update commands (this is a guess). It started on 2016-04-25 between midnight and 22:00 CDT.

Whoops, thanks for letting me know. Looked at my test pi crontab. I have two entries, on with a space at beginning and one without. No matter how many times I run the update, I do not seem to have any more entries added. 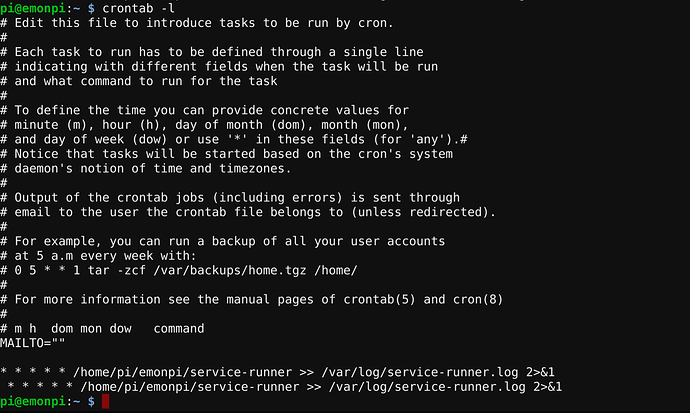 The issue of the 2nd entry with a space has been fixed by amending the update script.

However, you seem to have three entry without a space. could you delete the extra two with $ crontab -e then run the updated update to see if this change has fixed the issue?

Having two service runner entries does not seem to cause much harm other than a few extra processor cycles!

It works! Thank you!

@glyn.hudson - I just updated the emonPi to the emonSD-03May16 image today and it looks like the same issue with crontab & service-runner. I am guessing the 03May16 image has the old emoncmsupdate and it is causing the double entry. 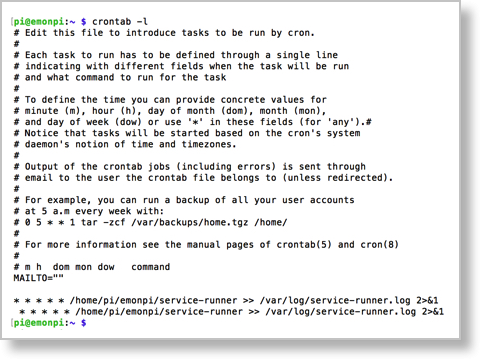 Ah yeah. But there shouldn’t be any additional entries if update is ran again. It does not seem to be an issue having two entries for service runner. It’s probably easier to add a check to the update script to remove the second entry. The new image is set to auto update on first boot, this first boot usually happens at the factory for new emonpi units, so any new changes made by the update will be applied.

I have added a check the the emoncmupdate script to check for and remove duplicate entries with a space: