Hello
I have an EmonTx 3.4 running v2.0 firmware ([emoncellar]), connected to wifi with an ESP2866 as described elsewhere on OEM. This sends data via MQTT to an RPi base elsewhere in the house, running the standard OEM stack as downloaded onto an SD card. There are other connections from a different EMONPi to the RPi base, and an input from my Tesla batteries.

I’ve noticed that there are an ever increasing number of ‘inputs’ as seen by the RPi from the EmonTX - up to more than 200 in 48 hours They look like this: 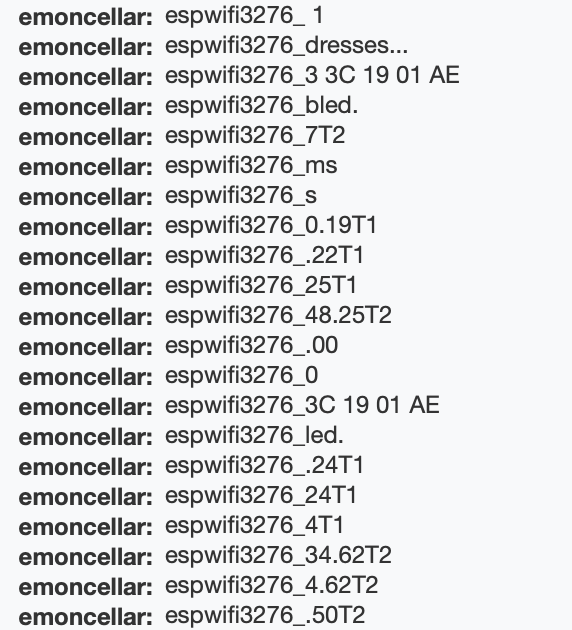 Any ideas what is creating all the ‘ghost’ inputs which I then have to delete?
The RPi EmonHub log is attached, but I dont think that helps at all
Thanks
Damien

Have you got both Tx and Rx lines between the emonTx and the ESP8266 connected?

Because it looks to me as if the ESP8266 is sending spurious characters to the emonTx (which is a known problem), and the emonTx is responding by going into calibration mode and replying with the calibration settings, which the ESP is then mangling and forwarding to your emonPi.

If that is indeed what’s happening, the hardware solution is to remove the output from the ESP to the emonTx, which is (confusingly) labelled Tx on the emonTx FTDI header.

Inside your emonTx, the alternative software solution is to remove the statements that send it to check the serial port for an incoming calibration command - readConfigInput() and getCalibration(). But of course, if you do that, you won’t be able to do an on-line configuration and calibration using a programmer.

Have you got both Tx and Rx lines between the emonTx and the ESP8266 connected?

the hardware solution is to remove the output from the ESP to the emonTx, which is (confusingly) labelled Tx on the emonTx FTDI header.

Done. And it all seems to work correctly now!

Of course, this is a case of RTFM, as the relevant pictures on the EmonTx - ESP8266 page clearly show the ESP8266 output isn’t connected…

I had wondered, in an exasperated sort of way, why the temperature output of the EmonTx had stopped. As you say, probably randomly reconfigured by the ESP, though the chances of sensing T0 1 seems slight … maybe a sign I should buy a lottery ticket.

As a suggestion for a small bit of extra info on the site, it might be worth adding a short sentence about this issue here or here… The latter link has a long thread about various ESP8266 issues, and this thread might be better there as well…

Unfortunately, I don’t have access to be able to edit the Guide, although if you look closely at the picture (and know what you’re looking for), it’s possible to see that the connection that caused your problem isn’t there.

I have edited the second post you mention, but that’s likely to be less relevant as forum posts get buried over time.

@TrystanLea - is there any chance of porting my edit into the Guide?

Thanks @Robert.Wall @dlongson I’ve added your note Robert to the guide Update esp8266-adapter-emontx.markdown · openenergymonitor/[email protected] · GitHub it may take a little time to work it’s way through online.