Dumb question?
Where to buy the 6 way ribbon cable shown in the original post?

Following on from the forum post here ESP8266 Wifi Developments. This is a brief guide on how to use the Adafruit ESP8266 Huzzah WIFI breakout module with an EmonTx v3 to make a simple WIFI enabled energy monitor that posts to a remote emoncms server such as emoncms.org. Note: this is an ongoing development project, but is a useful option in its present form [image] In the future, we may integrate the ESP8266 module directly on the EmonTx PCB. For now, the ESP8266 Huzzah module provides a goo…

Real answer: Most ribbon cable can be pulled apart, so get some 10-way and peel 4 off one edge. That’s how I made the 6-way extension lead for my programmer.

I’m into making Ethernet cables but this is new for me.

Where to get? & how to attach? the specific connectors shown in the pic in the post on the emonTx with ESP8266 Module? 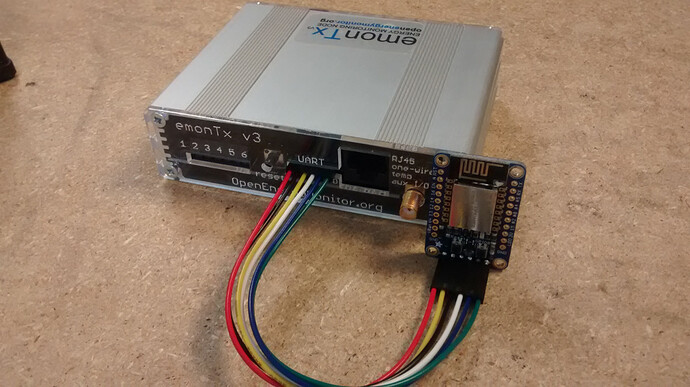 I think the “ribbon” cable in that picture is actually 6 separate cables with a single connector on each end - the sort that’s widely available for Arduinos.
Try a search for “Arduino jumper cables”.

You only need Vcc, Gnd, Tx and Rx. The other two pins (2 and 6) are not connected to anything on the HUZZAH (just there to match the standard FTDI pinout) so no issues if they are not connected.

Thanks & thanks also to the designers of this Forum in that one receives an email and doesn’t have to keep checking back to the Forum hoping to have received a reply.