there are no easy ways to mess it up

I just recalled that the emonTx breakout pins are (were?) labelled the wrong way round, but you should be already aware of that if you have been getting serial output ok. Easy one to get caught out by if not paying attention and IO can get damaged if both ends are trying to write via the same pin. You should connect Tx to Tx and Rx to Rx (when using an emonTx), some may say this is “easier” but it is actually the opposite to standard practice as you may know.

I just recalled that the emonTx breakout pins are (were?) labelled the wrong way round

I think that’s still correct on the silk screen. As you say, the pin labelled Tx is looking for the data that is coming out of a pin also labelled Tx, etc.
BUT: possibly to confuse it even further, the emonTx V3.4.1 schematic is like this: 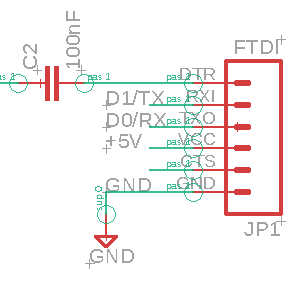 Make sense of that, if you can. (Actually, of the two involved, the pin nearest the end and furthest from GND is the one on which the emonTx is transmitting.)

some may say this is “easier” but it is actually the opposite to standard practice as you may know.

And continues to cause endless confusion because of that.

When you look up the standard (or Wikipedia), how the emonTx is labelled would be correct if the emonTx were a DCE - Data Communications Equipment (a modem), which I would argue it most definitely is not.

IO can get damaged if both ends are trying to write via the same pin.

I’m not sure I’m following you, PB. What specifically is it that can get damaged?

Yes you can, although I (and PIO) prefer to use miniterm

you must ensure that nothing is using the serial port when trying to upload.

In this case, emonhub? so just stop the daemon?

The gist of it is to use the rfm2pi wiki

I’m not confident I am finding the right information - what I have found seems to be geared to the RFM chip rather than the emonTX.

Can I just do the upload from PIO, rather than the avrdude-rpi mechanism? Can I simply do a pio run -t upload and specify the serial port? I suspect I can’t as I need to control the reset line (but that is a guess).

This really is a dark science to me

but you should be already aware of that if you have been getting serial output ok.

Yes I’m getting serial data from the TX, so I’m thinking that bit is OK.

I think he’s saying that if two outputs are connected together, one sourcing and one sinking, then excess current can flow. (He said, carefully avoiding the use of “Tx”.

Another minor success along my path of discovery - pressing the reset pin; causing a reset (funnily enough).

Took my life in my hands and Success!!

Having installed the system using the emonScripts, some of the elements were already in place.

First compile the sketch. I know that @Robert.Wall is not keen on PlatformIO, but on the Pi it installed and worked flawlessly as described here https://github.com/openenergymonitor/EmonTxV3CM/tree/master#how-to-compile. The only oddity is creating the hex file. That instruction says use the upload option but that of course complains (although is does create the hex). A bit of digging and I created a new environment in the platformio.ini and an extra_script.py. This then creates the hex cleanly. The avrdude-rpi repo is created and installed by the emonScripts on the Pi so that was all ready to use (bar editing it to change the pin number for reset). Stopped the emonhub service first then ran the avrdude command as listed in the docs above and hey presto.

It has taken me quite a while, pulling the various bits of documentation together have taken time, but pretty pleased I got there in the end.

to build (first run pulls in the Libraries)

You need to edit the file /opt/openenergymonitor/avrdude-rpi/autoreset and change the pin number to 12.

to upload (having stopped emonhub)

[edit]
The extra script is now available in the repository as is a new platformio.ini file so the compile command should just work. (14/8/20)

Emonhub- Edit Mosquitto update times
EmonTx - a question about accuracy at low power
How to configure in USA
borpin (Brian Orpin) 23 May 2020 16:49 #49

Just for posterity and so if anyone find this by search…

To get ‘miniterm’ to accept input from the keyboard (so enter config mode) you need to add the --rtscts option.

Secondly, the NodeID is by default 0. If you want to change this you need to add the nodeoffset option such that

Note the comma after the pubchannels line and the blank line.

As the data comes in as name:value pair, there is no need for a node definition to decode the data, so choose an unused number (0-4) or delete the node definition.

[edit]
It is also good practice to remove the JP2 when powering from both AC and DC.

The final question (I hope), looking at the inputs;

What is the correct processing to log to feed? Is the cumulative Energy more accurate than using the power?

If you’re talking about emonLibCM - possibly, but you’d probably need to carefully contrive the numbers to show it. Power is reported as watts, rounded to an integer; energy is reported as cumulative watt-hours truncated to an integer, but the truncation error is carried forward into the next reporting period.

Having said that, it probably only matters if you’ve calibrated your emonTx, because component tolerance errors (at around 1%) are likely to be larger than these in normal circumstances.

because component tolerance errors (at around 1%) are likely to be larger than these in normal circumstances.

It turns out that I was not far wrong there. Having carefully logged both Energy accumulated by emonLibCM and Wh accumulated by emonCMS from power, for two channels with c.t’s on the same cable, the ratios of Energy/Wh over a count of 4000 approx. are

There is always something else isn’t there…

I discovered that, somehow, I did not have the latest version of the firmware. I was sure I’d cloned the repo recently, so why I was on version 1.3.0 I have no idea.

Updated the repo and rebuilt the hex. Uploaded to the emonTX. By default the serial output is disabled now so I needed to switch the RF off (w0) in config mode.

Other than that all seems good.

As reported elsewhere, the default emonTx sketch was updated only days ago for units despatched from the shop, but I gather that black hole called Github was updated some time earlier.

but I gather that black hole called Github was updated some time earlier.

It’s just a tool Paul Robert - one that takes a while to master. In fact, once you do understand it at least a little, it is very useful (trust me).

Yes you can clearly see it was updated several times since the 1.3.0 release (which was done last Nov) - I don’t understand what I must have done or else I mis remember what I did. https://github.com/openenergymonitor/EmonTxV3CM/releases

It’s just a tool Paul - one that takes a while to master.

Do you mean me? I tried, but at my age and state of disillusionment, I don’t have the time - not with all the other stuff I do for OEM.

I use GitHub for all sorts of stuff to keep track of changes not just OEM, and often it is the only way to contribute.

If it’s the only way to contribute, then whoever it is will have to get by without me. Like any tool, if you find it useful, that’s fine by me. I don’t. Maybe that was the fault of the guide I was reading, but it looked to be an impenetrable jungle with nomenclature that made no sense and seemed to mean that some third party heaven knows where in the world would have control over my machine. I had enough of that with Mickeysoft when it would decide what it wanted to do was more important than what I needed to do.

Yes it took me a while to get used to the lingo, but it is still a program and it simply does what you tell it to do. Working out exactly what to tell it to do, so it does what you want, can be a different issue but in no way does any third party have control of your machine or code. The other thing of course is that you can almost always go back to where you were. but I know you are not a fan

That’s how it appeared from what I was reading - whereupon I quit.

I’ve used other version control software in the past, so maybe you need to write a manual in real English for me. (I can cope with a Welsh or a Scots dialect if needs be

I think I have a better answer to that question now. The vertical units are kW: 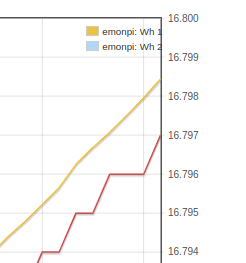