emonTH in a waterproof enclosure?

Can anyone suggest a suitable waterproof enclosure for the emonTH board? (without the internal humidity sensor). Perhaps something like one of these?

Yes I’m sure that case would work if it will fit the emonTH:

However, do you need the whole unit to be waterproof? How about connecting an external waterproof encapsulated sensor.?

Thanks! Yes, the emonTH unit will be outside, so definitely needs to be waterproof. It is going to monitor a solar hot water collector, so between the rain and possible collector leaks…

Nick, I’ve used one of these Schneider boxes, again from Screwfix to house an emonTX board, which I use to monitor the outdoor temperature.
Despite only being IP55 rated, It’s been wedged between the branches of a tree in my garden for two and a half years, and open to the great South Yorkshire weather - rain, snow, sun & wind, and has never let me down, and still going strong.
I’ve just carefully made a small hole in a gland (smaller than the encapsulated DS18B20 cable diameter) and squeezed the cable through, so it’s a tight self sealing fit. 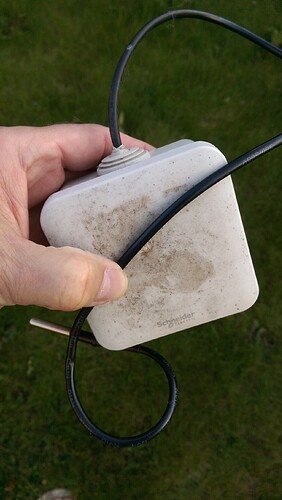 Fantastic, just what I was looking for

Don’t strain the cable - allow it to self-centre in the hole in the gland. I’ve seen those with an RJ45 back-back connector squeezed in, in West-coast Scotland, and full of water despite being tucked under the eaves of the house.

I use these boxes from Adafruit: Store your project safe and sound in this nice weatherproof box with a clear top. We picked up this box because we like the machinable ABS plastic body and tough clear polycarbonate cover, ... 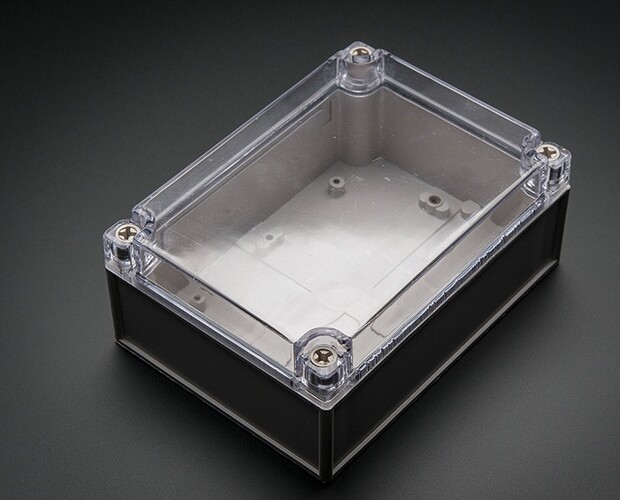 I then drill in a waterproof gland connector: 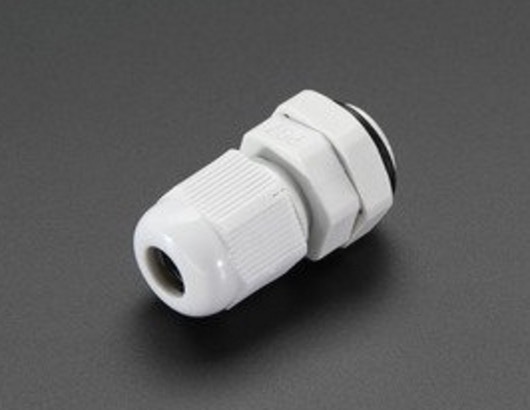 I have had one floating in my pool (trailing a waterproof temp sensor serverl feet below it) for several months now without a single drop of water getting into the box!

Just had another D’oh! moment. I was going to order a water resistant (water proof?) box like the ones above. And it dawned on me the emonTH humidity sensor may not be too accurate on the inside of this box.

Using an emonTH and one of the above enclosures, is there a way for the DHT22 to work? I don’t mind adding a radiation shield (something like this below). I just don’t want to destroy the DHT22 after one rain or one season. 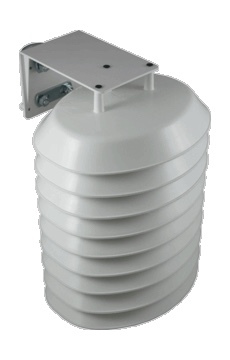 The radiation shield is just what the doctor ordered for the temp probe. Ideally your humidity sensor should be in an aspirated enclosure. (NWS ET 2007-2012)

Also I found a few references of the DHT22 sensor wrapped with thread seal tape - PTFE. The tape is polytetrafluoroethylene - PTFE. It allows water vapor to pass back and forth while protecting the sensor. Still reading…

Sources:
Using DHT22, RHT03, AM2302 And Other Humidity Sensors Outdoors

The Internet of Bees: Adding Sensors to Monitor Hive Health (Glyn and others may like this one!)

Maybe with a fan?

You got it. A vented box with a fan.

I’ve always called it teflon tape but it seems Chemours, the owner of Teflon trademark, doesn’t like that term.

Here’s the humidity sensor the NWS uses. (they call it a temp/dewpoint sensor) The film capacitor sensor is inside a fine mesh screen, the unit itself is housed under a protective cover, but is otherwise exposed to the elements. I’m thinking if the wire mesh screen were available, it might make a good sub for the PTFE tape. 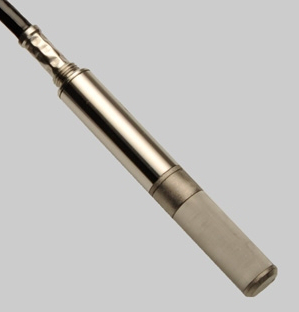 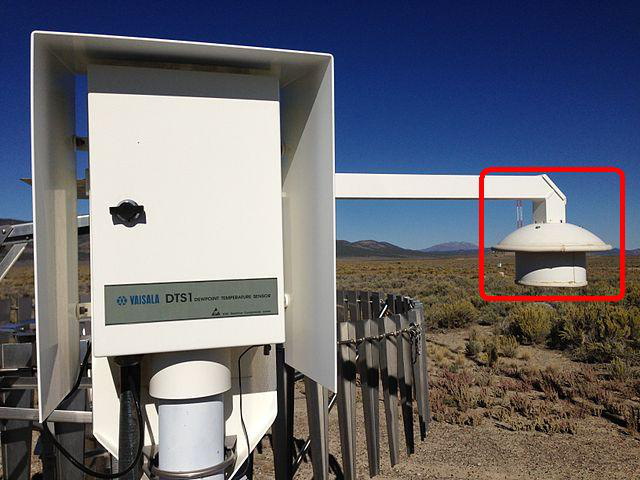 The probe is mounted verticaly under the “mushroom cap.” (outlined in red)
The white box to the left houses the sensor electronics.

On a slightly different thread, you are aware the DHT22 sensors are shockingly inaccurate?

this site has all the details. I tried it myself, plugged 2 brand new DHT22’s and an older DHT11 into a breadboard with a DIY emonTH node and monitored it for a couple of months. Mine were 15-20% out on average. The 11 was even worse.
Complete waste of time. There is a routine to attempt to calibrate them, but it made it it even worse (though that may have been my fault with condensing moisture).

I’ve now got a Bosch BME280 in to replace them, but not got around to fitting it yet…

I have had good results with the BME280.

On a slightly different thread, you are aware the DHT22 sensors are shockingly inaccurate?

Yes, alternative sensors are being discussed on a parallel thread:

I’ve been evaluating the HTU21D temperature and humidity sensor made by Measurement Specialties as a possible DHT22 replacement for the emonTH. This is quite a new sensor, released in 2013. The Si7021 is also a possiblity with an identical pin-out. OctoPart list Datasheet Farnell item DFM footprint Digital, pre-clibrated I2C The metrics speak for themselves: [image] *Assuming 1 sample per min and sleeping in between samples, 1440 min per day = 86400s per day. See HTU21D testing repo a [sub…

Here is my waterproof emonTH build for outdoor temperature logging.

In order to fit the emonTH board into the enclosure, it was necessary make some modifications. The onboard AA cell holder was removed to lower the profile and replaced with two single AA cell holders, secured either side of the board. In order to fit the PCB, existing standoffs in the case were cut off and a small groove cut which allows the board to fit snugly and be retained without fixings. The hole for the gland was drilled and then tapped with an M8 tap - the plastic is strong enough to nip up the gland and compress the seal without stripping the threads providing you are careful. Try as I might (even with a vacuum desoldering station) I could not remove the turned pin socket for the DHT22, so simply soldered a piece of 0.1" pin header to the DHT44 cable once it had been passed through the gland, and plugged it in. It’s all a bit of a squeeze, but the lid does go on

I also have the Ambient Weather Solar Shield as mentioned above, http://www.ambientweather.com/amwesrpatean.html. After trimming off unused mountings on one of the plates, it is possible to fit the entire enclosure between the two bottom plates of the solar shield - you might be just able to make it out in the photo below. The DHT44 sensor is secured to a rod which runs up the centre of the solar shield. 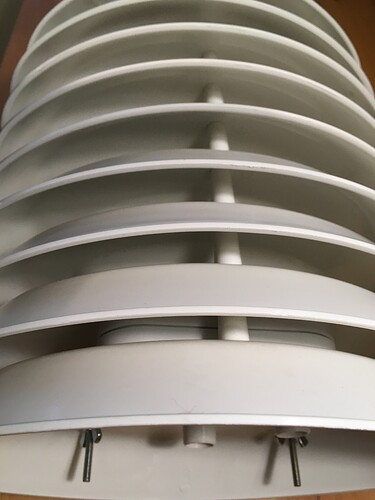 Haven’t put it up in the garden yet so I can’t tell you how well it’s performing. That was meant to be today’s job, but of course its raining…

Very clean install, Andy. You made it look like the enclosure was designed for the emonTH. Nice job!

Wow that’s quite a nice job you did. Am also keen to know how it behaves. Do you have a nearby weather station to compare (Metar or a Davis VP2 for ex ?)
As the weather geeks will tell you, it is very easy to have bad readings …