Hello! I just tried to run an emonPi update and things didn’t work as hoped. After click the emonPi Update (on Setup > Administration webpage) the log from 4 days ago went flying by in the Update log window. After waiting a few minutes I did a reboot.

The emonpi update seems to have happen before the emonPi reboot. And since there are LOTS of errors in the emonpiupdate.log (enclosed below) I tried to do another emonpi update. But the same issue (the log from an hour ago went flying by in the Update log window).

I’m hoping if I can get the emonPi update to run then the emonpiupdate.log errors might disappear… 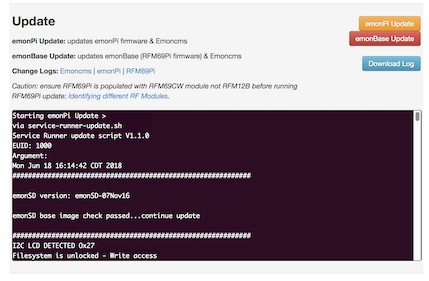 EDIT 2: I ran this to force an update.

Errors not reported in emonpiupdate.log file

I still have lots of errors related to emonpi2c

And I cannot get the emopi Update to run via the webpage. ugh!

to correct these errors:

this line needs to have root permissions:

Hi @Jon, looking at your log (among other things) it looks like your file system was in read-only mode for the larger latter portion and therefore many commands failed and those that didn’t will not have stuck.

The update script doesn’t call rpi-rw very often so once it’s gone RO it’s unlikely to recover, and even if it did, then there could be missing bit go un-noticed or partial updates that cause issues. When I wrote an install/update script fora RO emonSD image just before the launch of the emonPi, I wrapped each command in a function that checked the FS status and called rpi-rw (if needed) at every step but that approach is not used in the emonSD so this sort of thing can happen at anytime.

The FS can be mounted RO at anytime due to a user command (rpi-ro) in another console/window or indeed another script of some description running in the background that has the same ability as the update script to lock the FS when it’s done. The way I did it, the status of the FS immediately before the wrapped command was called determined if the FS got locked or not on completion, so there was no chance of one process/script locking down the FS while another was still in progress.

There is also the “auto-lock” function that runs hourly and mounts the FS read-only, if you are really unlucky you could call the update seconds before that cron task runs and locks the FS again before the update completes, in this instance though I think the node-red update was just so long that it eventually timed out, that has been reported before here on the forum.

Or you could look at the /etc/crontab file and determine when your cron-hourly is run and work around that knowing the FS will re lock each hour at that time (eg 17mins past the hour in the following example) or you could temporarily disable the cron job.

You could also keep an eye on the /var/log/service-runner.log file (or something close to that name) for errors as not all the update commands output goes to the update log.

And I cannot get the emopi Update to run via the webpage. ugh!

…and if you have not successfully updated since 7th June then there is the added possibility that some but not all of the changes made to switch the service-runner to using a redis queue may have stuck but not others if it bombed out part way though, potentially leaving you with a broken service-runner/updater. I only say this based on your above comment, I have not looked closely at how it’s done to know if it’s definitely the case.

sorry for the late reply! my bad! I got the first set of errors fixed with the sudo command.

The second set of errors was as you said. my emonPi went into the read-only mode part way thru the emonPi update. I got two of those types of errors in a row (odd coincidence?).

I looked at the service-runner and all looked like a correct copy of the service runner on GitHub. But I do have a recent problem with redis.

Redis does not startup after a reboot emonPi

@TrystanLea - I just ran the emonpi Update and I get the same error.   @Greebo fix worked great!

I still haven’t figured out why I cannot get the emopi Update to run via the webpage. Too many odd issues! No worries, I’ll figure it out someday!