I’m trying to understand something very basic here: to keep an eye on my energy usage I have a CT clamp linked to an ancient current cost CC128 display and also the zigbee smart meter supplied by my leccy company. These have always agreed quite well.

But today I temporarily parked some second hand solar PV modules and a Grid Tie inverter on the lawn to test them out. When it started generating I could see the base load shown on my smart meter going down from around 700W to zero - where it stayed until the clouds came over. Great!

But the CC128 didn’t drop in the same way. It did initially but bottomed out at around 350W, then started climbing back up! Now I expected it to go all the way down to zero THEN climb back up (with increasing generation) because the CT isn’t referenced to the Voltage waveform - hence import/export would look the same. But it never went below this rough 350W offset.

The plot then really thickened when I put a Digital clamp meter on the same incoming cable as the CC128 CT and it showed similar behaviour: where I would expect it to go down to zero Amps and back up again, it just wouldn’t go below 1.5 Amps. I tried switching on and off some small loads to balance consumption around zero and the smart meter followed as expected but the Amps always stayed above 1.5.

I just don’t get how the current meters would both show the same offset. If I put my clamp DMM on the live wire of a 450 Watt halogen heater it shows 1.8A and on a 50 Watt halogen lamp reads 0.2A so I think the meter is OK. What am I missing?

BTW, first post here… going to be getting in much deeper once PV is up and running properly.

Welcome, Adrian, to the OEM forum.

I can understand why you’re perplexed by what you’re seeing. I’m not absolutely certain what the problem is from what you’ve written, but it seems likely to me that you’re seeing what we call “vars”.

When you have a purely resistive load, it obeys the familiar rule P = V × I. If however your load is reactive, then the current isn’t in phase with the voltage - it’s delayed, and mathematically we split the current into two parts - the resistive component that’s exactly in phase with the voltage and gives you real power (the part you pay for); and the reactive part at right angles that just shuffles power in and out on alternate quarter-cycles, so there’s no nett power flow. I think what happened is when your smart meter showed zero real power, you’d tweaked the loads to make the real component of current zero, so your ammeter and the CC128 were looking at the reactive component of the current - the “power” in that is Volt Amperes Reactive - called vars. (I was taught a much more meaningful name for it - imaginary power because it’s not real, it won’t heat anything up and you can’t use it.)

When you have a reactive load, the product V × I is Apparent power, and the unit is the volt-ampere (va). Real power is never greater than apparent power.

Thanks Robert, yes I should have thought of that but I find it hard to believe that I have 350VAR in my base load! Still, that could explain the discrepancy.

Although… when I add a resistive load like a 2.5kW oven element both smart meter and CC128 agree within 100W (hard to tell because of different update rates and variability of base load). I would expect to see the 350VAR difference between these two higher readings. I could switch off all the vampires that give me my circa 500W base load but half a dozen RasPi’s, and assorted smart devices all take ages to bring down and up so I kind of avoid such self inflicted power cuts if I can.

First I need to break out the scope and take a look at the phase relationship between the current seen by the clamps and the mains voltage. The problem with that being how to isolate the mains without introducing yet another phase shift.

At least I know my inverter has a PF of 1 when it gets going (I checked).

350 VA struck me as being rather high, but I can’t think of anything else to blame.

First I need to break out the scope and take a look at the phase relationship between the current seen by the clamps and the mains voltage. The problem with that being how to isolate the mains without introducing yet another phase shift.

If you have a decent 'scope and ×10 or ×100 probes, it should be perfectly OK on UK mains voltage. Don’t put the ground lead on the neutral - you’ll trip your RCD. And note, your c.t. will have a few degrees of phase shift.

I think the major contributor to the current you’re seeing is likely the harmonics, in which case you’ll struggle to make much sense of it when you try to line it up with V.

When the house is roughly in balance (i.e. when no real power is passing through the meter because the inverter output roughly matches the loads) the current you’ll see from your whole-house CT will be a real mess. Effectively the inverter is satisfying the house’s 50Hz needs while leaving the grid to supply all the harmonics.

Here’s a capture of how mine looks when in balance. It’s difficult to catch it in perfect balance because of varying loads and varying clouds, but this was pretty close.

An overcast morning here leant itself to another capture - I just switched on lights until I got very close to balanced (9W export). This time I captured it on the dials as well, so you can see the breakdown:

Even so, it’s still swamped by all the harmonics (296 Vs 120). When you break out the Distortion Power, the power triangle becomes three dimensional so:

An overcast morning here leant itself to another capture - I just switched on lights until I got very close to balanced (9W export). This time I captured it on the dials as well, so you can see the breakdown:

That’s really interesting, I seriously need to up my monitoring game. Makes me realise the true challenge of implementing the 1Wh bucket trick for Solar PV diversion.

I’m no expert on them, but I imagine their balance looks a lot different from the above balance. I think they typically turn on a big resistive load (probably in the 2 to 4 kW region) for a cycle or two and then turn it off and let the PV export for a cycle or two. So you’d probably be looking at big healthy sine waves there (give or take the other loads that are on), that reverse direction often.

Robin Emley seems to have managed it. He works on real power (rather than current) and seems to be able to satisfactorily balance to zero nett energy flow for most meters. www.mk2pvrouter.co.uk if you’re interested. His code forms the basis of emonLibCM.

He ignores the phase error between v.t & c.t. exactly because, with relatively high power loads with close to unity power factor (and I include the inverter generating in that, because that too is close to unity p.f.) the phase error is relatively unimportant. It’s only when the overall power factor deteriorates that it takes on a greater significance.

Interesting. I bet you wish you had that luxury in emonLibCM. I wonder how well that will perform with the latest inverter/connection standards. Here (and I think maybe in Germany before us) they’ve discovered having all those inverters on the LV side of the network can be useful for keeping the voltage in spec. 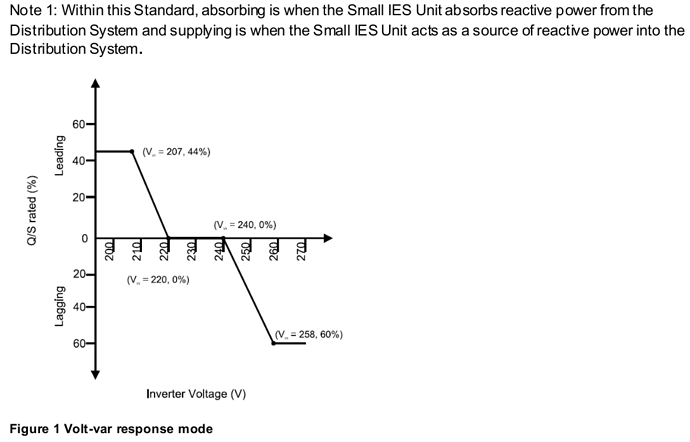 That looks as if they are, or would like to be, using the inverter purely to provide a reactance on the network. Can that be true, or does it depend on the inverter supplying real power at the same time, and does it all fall apart as darkness falls?

Only when it’s supplying real power, so no help after dark. But I guess after dark it’s more like the good ol’ days before PV took off. They have a reasonable handle on voltage regulation in those conditions. When PV really took off - so much so that plenty of 11kV feeders run backwards now in the middle of the day - they start to struggle with LV voltage regulation because they’re no longer providing the power, instead they’re busy trying to absorb it.

The connection standards have gone through various stages, getting smarter with each iteration. Initially inverters would have to shut off if V exceeded some Vmax setpoint, and then very slowly ramp back up. Consumers weren’t real happy with that, because their inverters were spending way too much time off.

Then I think it became that when an inverter got to X% of its rated output it had to clip real power and use the excess energy to do its reactive responsibilities (for which there’s no payment). That one was regardless of voltage. So you’ll see a lot of solar power curves now that look like: 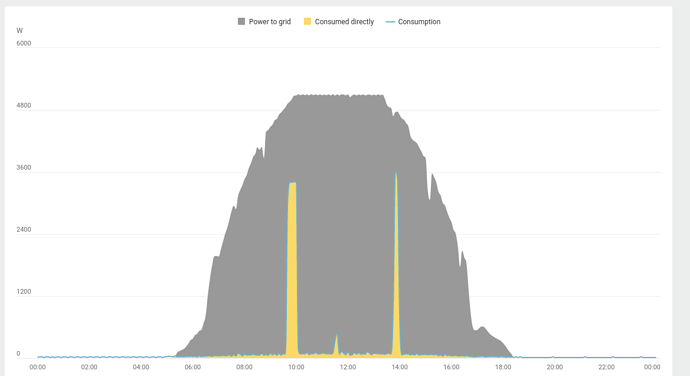 This newest version seems even better. So long as V remains between 220V and 240V you can produce full real power.

BTW, that pic also shows a poor man’s hotwater diverter. Those two 3600W spikes are the hotwater element. It’s becoming common to move storage tanks off the off-peak tariff and instead put them on a simple timer so they can only run between 9am and 3pm say. Around these parts, most days it works out.