You may have noticed that when you select a time period in MySolar where there is no e̶x̶p̶o̶r̶t̶ generation, the ‘Export’ field will show NaN% which is not particularly helpful!
@mattjgalloway has been working on a fix, but there has been some debate as to what should be displayed under these circumstances.

The discussion is on git, and Matt and I would appreciate your thoughts.

where there is no export

I don’t think I know what Export % actually means! OK, I know where the numbers come from, but as a percentage? Does it really have any meaning? Certainly, in the light of the UK’s FIT payments, it’s good to keep both it and the absolute value in kWh small, but I’m struggling to see how showing a percentage adds anything.

but I’m struggling to see how showing a percentage adds anything.

Doesn’t it give a good indication of whether your making best use of solar?

I don’t think it adds anything to what the absolute value (kWh) tells, in a UK-FIT world - that was my point. Elsewhere, under different pricing models, it might have more meaning as a percentage, or there might be other values that better express the ‘goodness’.

(If you are lucky enough to have a ratchet-less Ferraris meter, a high export value is good because the import kWh meter unwinds. If you are unlucky, like @Bill.Thomson was, and have (or had) a meter that incremented for both import and export, then any export is extremely bad. )

I think “–%” fits the job better. it is indicating the lack of a percentage rather than “making one up”. I can see why the question would be asked, as I too would prefer the look of a zero but it is not accurate.

When there is no generation it could be equally be said 100% of it is being exported if the math was based on the comparison of import and consumption. Take a possible but unlikely situation where there is near zero consumption, as generation starts it could actually be mostly exported.

but I’m struggling to see how showing a percentage adds anything.

I think percentage give’s the absolute value some scale, making it easier to digest and to share/compare with others, plus the UK fit payments being based on 50% give it some direct value that isn’t really shown anywhere else in emoncms.

On a more general nore these percentages are not the most intuitive data displayed, this screenshot shows the 3 percentages and without much indication of what they are percentages of, it isn’t obvious what they represent, especially when they add up to 162%! 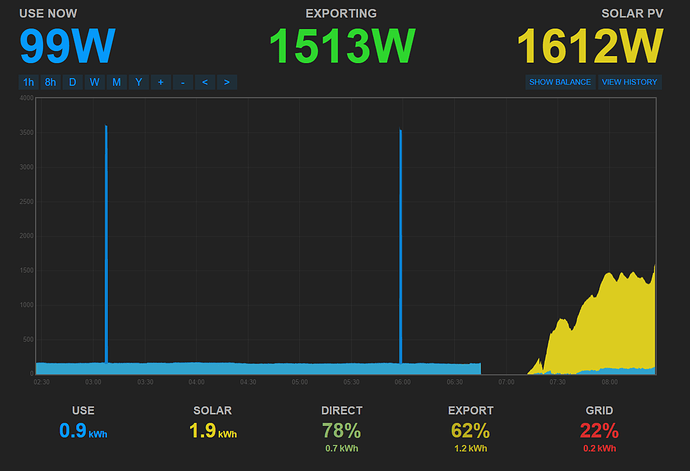 Certainly, in the light of the UK’s FIT payments, it’s good to keep both it and the absolute value in kWh small,

I agree the percentages should stay but wonder if the kWh’s should be large as they are absolute values (and they would then match also the other 2 kWh values) this may make it easier on the eye since zero would make sense and there is no reason to have a “NaN” or a “–” kWh’s. The percentages could then be smaller below the kWh’s and have under that some small print eg “of generation”

I also think a different order or grouping might help eg

In fact there should be 4 percentage values, the “direct” should be shown as a %age of generation as well as a percentage of use, percentages (when displayed) will then always equal 200% (100% of use and 100% of generation). Positioning the 4 %ages to span the 3 centre values with use of color and spacing, could make it more intuitive.

Over on the emoncms/app repo @mattjgalloway has proposed some changes/additions to accommodate those of us diverting our surplus “free” un-exported PV to an immesion water heater, battery charging etc etc. [image] I think it is a great idea as “diverted” energy never seems to fit comfortably in the “use” category as it is something we wish to maximise where as “use” is something we want to minimize, in the current MySolar App you have to choose between including it in “use” and on a hot summer…

I think there are many ways the data could be made clearer and some or most of those would be debatable on how each individual reads the data. But to go back to the original topic at hand.

The “–%” is much better than “NaN%”, both on the eye and in the message it delivers, definitely a step in the right direction, thanks Matt.

EDIT - having just caught up on the more recent posts on the “diversion version” PR of the mysolar app, I see most of what I’ve said here is already being discussed on that PR thread. good progress Matt I like your direction (but agree the boxes need toning down a tad) . It would be good to see this as an android app too one day so please bear that in mind too when redesigning the layout (which I’m sure you probably are).

Agreed. That was the starting point for my redesign of the bottom bit on my solar + divert app. I was finding myself primarily concerned with the raw number, and the percentage second.

but agree the boxes need toning down a tad

Yeh I agree. It does look better on the page than in a screenshot like that, but it’s still a bit harsh I think. I’ll keep tweaking :-).