I just installed a EmonTX and noticed that the voltage was reading a lot higher than my EmonPi… looking back I can see that the voltage measurement seems to have changed back in May (when I rebuilt the EmonPi with a new image): 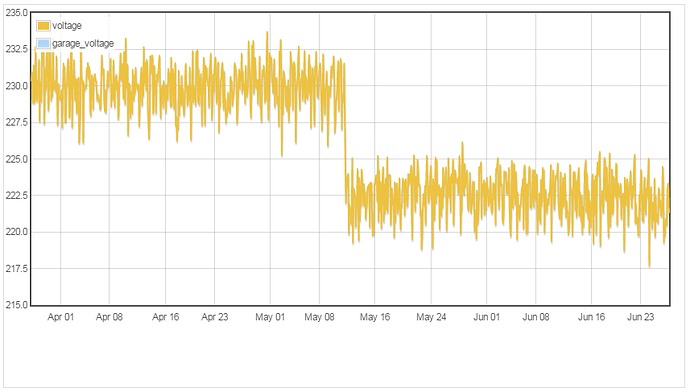 Anyone suggest how/why this happened and how to correct it? I am sure I read something about power up order, but AC would already have been on when the EmonPi was started. The discrepancy is obvious when you look at the EmonTX voltage reported: 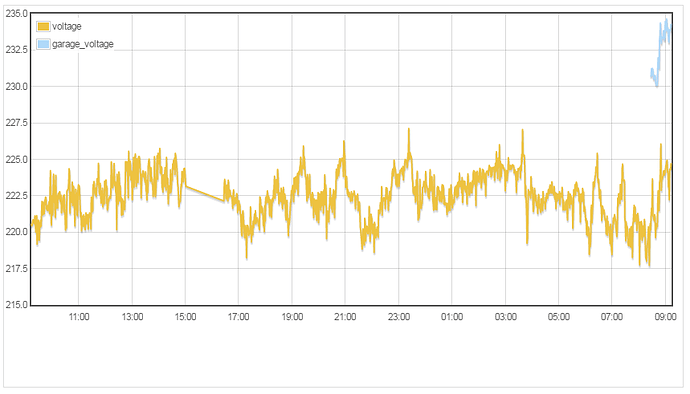 The difference between your emonPi and emonTx can be explained both by component tolerances and presumably because they’re not measuring the same voltage. Without knowing the cable sizes, lengths and loads, the latter is impossible to guess but no point in your installation should suffer a voltage drop of more than 2.5% (UK rules).

Why your emonPi changed I cannot say - as far as I’m aware, the voltage calibration for the sketch inside it hasn’t changed at all.

You can of course adjust the “scales” constant in emonHub to perform a scale calibration of both emonPi and emonTx, bear in mind that voltage and power calibrations are totally independent by the time the numbers get into emonHub.

I appreciate the two will read different, but the sudden change in the EmonPi seems weird, and of course is wrong as voltage really is 230v as measured by EmonTX (and a number of other devices - including an expensive fluke meter the Electrician installing my EVSE used yesterday).

I will try a FW update just in case I suppose, seems strange that it changed.

when I rebuilt the EmonPi with a new image

I don’t suppose you know which image was the before image, and which the after? If you do and it’s repeatable we should probably be able to work it out.

I can swap the AC adapters between the two (EmonTX is power by AC) but I suspect that its a reading issue on the EmonPi somehow. It track’s exactly, the EmonPi just seems to be consistently 10v under mains voltage for some reason: 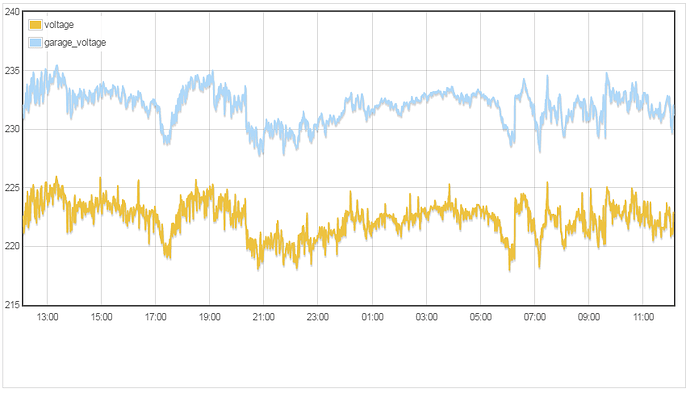 The ac adapter output is only part of the calibration issue. The other parts are the voltage dividers in the front end interface, and the value of the analogue reference used by the ADC (i.e. the 3.3 V supply voltage). All 4 components in each (transformer, 2 resistors and regulator) are subject to manufacturing tolerances. You have two sets of components whose tolerances together would easily cover that 10 V difference - the ‘worst case’ error is just less than ±6%, so given extreme bad luck, you could have over 11% difference between the two.
(N.B. The nominal UK voltage is still 240 V, despite being specified as 230 V +10% -6%.)

Yes just seemed strange that I had the sudden jump, same 5V PSU for the EmonPi etc, I will have to do some experimentation…

As I wrote earlier, that there was a sudden jump when you updated the Pi software points towards a changed calibration somewhere; but repeating myself, I’m not aware that the default calibration constants have changed. There’s been no reason that I’m aware of for them to change, that doesn’t mean they haven’t, but a change might have been accidental.

The 5 V d.c. supply should only affect calibration marginally, as it’s the supply to the 3.3 V regulator, the output of that being the reference.

I did run an update yesterday (to re-apply the firmware to emonpi shield) and nothing change, I could “fix” it with a sum on the input I suppose, but it vexes me that its changed - I will check everything carefully when I get a chance in the near future and report back.