I have finally got some monitoring installed (emontx + emonbase, monitoring import / export of solar and now heatpump with so far a single temp sensor monitoring heat pump flow temp).

So, I understand that in order to calculate the actual COP, I need a heat meter. Just trying to understand what the minimum setup is to use the “simulated COP”. I see that there is an option for “fixed outside temperature”. Is this value ignored if you already have the outside temperature being measured? (I am not currently doing this, but hoping to do so soon). Second question, I see in the guides the mention of measuring the return temperature, but I don’t believe this is actually required to calculate the COP? If I were to measure this, what extra insight can one gain from doing so? 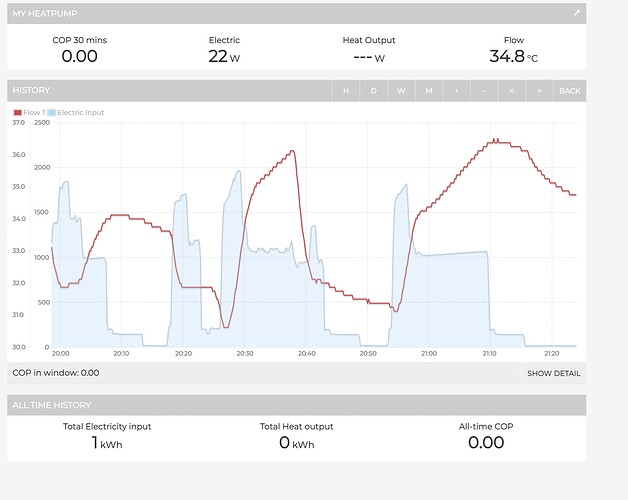 Final question, is it possible to use the “simulated COP” as the actual COP? So it shows up under “COP 30 minutes” and “All Time COP” and the simulated heat output shows under “Heat Output” etc? Not adverse to setting up some external fake sensors that input this data to a emoncms feed so that it can be populated via that if that is a possibility (using an MQTT feed or some such perhaps)

Hope that makes somewhat sense! Thanks in advance

I think so but I’m not disconnecting my outside temperature to find out!

measuring the return temperature, but I don’t believe this is actually required to calculate the COP? If I were to measure this, what extra insight can one gain from doing so?

Wouldn’t return be needed to work out how much energy had been added on its way through the heat pump?

Seeing flow and return allows one to estimate the δT for the system. I wouldn’t have been quite so confident to call something short-cycling without being able to see that δT was less than 3°c when it happened.

It’s not what I would expect. It looks very unstable instead of holding a near-constant flow temperature. Others who know more may be able to say if that’s to be expected with your system.

I’m not sure about your CT and simulated COP as real COP questions.

Thanks for the input @mjr!

I wouldn’t have been quite so confident to call something short-cycling without being able to see that δT was less than 3°c when it happened.

I am curious, whats the significance of the 3c difference here?

It’s not what I would expect. It looks very unstable instead of holding a near-constant flow temperature.

Yeah, this is something I am not too sure about how its supposed to work, obviously all systems are different. Here is a screenshot over a much longer time period, would be interesting to know if anyone can see anything obviously off! 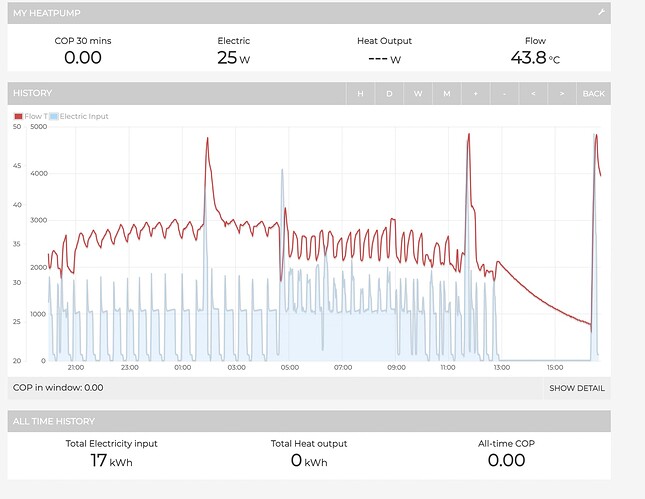 It was on a setback temperature from 21:00 until 04:45, so I wouldn’t have thought it would need to come on at all during that time period, as the temperature should have just been dropping ( apart from the big spike at 2am, which I believe was the DHW). Also not quite sure why it was on so constantly from 0445 until 10:00!

Here is a screenshot over a much longer time period,

I’m seeing 4 cycles per hour overnight in your screenshot, around 10 minutes per cycle, which might not ideal but I don’t think is very bad. Can’t tell if this is being triggered by the HP or something else in your system, so I’d suggest looking closely at the room thermostats, maybe find out their make/model and manuals.

It’s also curious why it’s running overnight - either the setback is being ignored, or the other thermostat is still calling for heat. What time does your set-back period end? 0445 perhaps? Is it set on the HP unit, or a programmable room stat? Have you checked that all the relevant clocks are set to the correct time (zone)?

The flow temperature looks to be following the curve I’d expect to see, keeping it at 37 through the night. It’s working harder from 0445, yet the flow temperature isn’t going higher. My guess is that the underfloor heating is staying on through the night (cycling), and then the radiators are coming on in the morning pulling more heat out of the system. [Based on some things you said in your previous thread]

We can at least see that your heat pump can scale down to a minimum power of 1 kW, which is good.

My guess is that the underfloor heating is staying on through the night (cycling), and then the radiators are coming on in the morning pulling more heat out of the system

Yes of course! I am a muppet. I keep forgetting about the underfloor, that is exactly what that will be. It’s just a dumb set and forget thermostat with no scheduling. Tonight I will remember to “set it back” manually and see what happens!

What time does your set-back period end? 0445 perhaps

4:50, so pretty much spot on reading that graph!

I’d suggest looking closely at the room thermostats, maybe find out their make/model and manuals

The underfloor is a very dumb set and forget, the programmable for the radiators is an ancient one of these: https://www.directheatingsupplies.co.uk/pdfs/CM927%20User%20Guide.pdf

Getting a quote to swap out both for some of the more modern Heatmizer range, so hopefully that will give us some more control / better understanding of what they are doing!

I am also surprised the DHW came on again just now (most recent spike on the far right), as it came on only 6 hours ago, and no one has really used any water since the 11:30 am spike!. Supposedly the tank should only lose a 3rd of a degree an hour if not being used and the HP is set to heat if it drops 5c below the set point of 48c, so with my maths, it should last 15 hours!)

whats the significance of the 3c difference here?

Sorry: the ecodan shuts off temporarily if return gets within 3°c of flow. I think that’s documented somewhere.

Usually the loss is related to the ambient temperature where the tank is. Could that be a factor? Also, I think our reheat has slowly grown to something like 20°c because the thermometer is nearer the bottom than the top, so are you sure you want 5°c? Do you have times when auto-reheat is prohibited?

You might want to adjust this so it comes on after a larger drop - see this thread about only heating hot water when it’s cold for justification. For instance, I put mine on to heat the water at 10am, when a) there’s not so much demand for heating, b) the ambient temperature is higher and c) there’s a good chance of sunlight on the solar panels. I generally find heating it once-a-day is enough.

After a bath and two showers last night, the temperature of our tank had dropped to 12 degrees (!), yet as that’s measured at the bottom of the tank there was still hot water coming out of the top. It was still measuring 12 degrees this morning when the heat pump was then allowed to heat it. Took about 45 minutes to heat the tank up to target temperature again.

Thanks both! Interesting info on the hot water heating. That will be next on my list of stuff to tweak

I think I have answered my own question about the simulated COP reading. I believe it does use your own outside temp mesaurement if one is set. I installed one last night and the COP value seems to not change if I change the “fixed outside temp” value