Wouldn't it be nice.... If the log windows on the admin page would scroll before your eyes

Yeah I thought so too, so there is a PR incoming…

Please excuse the form spam while I reply to myself - this works as intended - kinda.

It does keep the log following the output - however that does make it pretty impossible to scroll back up the log.
So right now - this looks very cool - but its not quite as functional as I would like…

I thought that it already did?

I think what I actually need - is the auto-refresh button, on the update log…

Are you just referring to windows? The log files do scroll on Linux. I would like to make the log window viewer for the emonPi update log window persistent, currently when navigating away from the page after updating the log window disappears which makes future debugging tricky. As I mentioned previously a one button press to save or copy a log file would be super useful for user support.

if you’re referring to the current Update emonPi log window - it does not auto scroll for me. 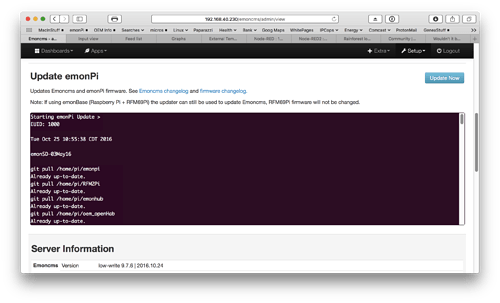 I have made it sort-of work, although it bizarrely didn’t scroll right very end (it stops a few lines up from the end at the moment) although I could probably fix that.

Just tested; you’re right. It doesn’t auto scroll. I;m sure it used to at some point in the past! It would be nice if it did autoscroll…

PR has been merged.