After a few attempts at different options - I finally got a way to pull data about our solar PV generation into the EmonCMS.

We have a Solis Wifi Dongle plugged into the Inverter, which has been successfully sending data to their server in China, which I can access via their web dashboard, but I wanted it in the EmonCMS.

Option 1 - use our existing emonTX and a CT clamp - but as the live and neutral wire from the PV are housed in one cable, this would have required some rewiring which I’m not confident doing.

Option 2 - I found scripts that log into the ginlong website and pull data out - but this felt risky, and as it only logs every 6 mins the data would always be a bit old - plus if they changed their website it would break - or my account may get blocked from suspicious log in activity

Option 3 - the wifi dongle can send data to a 2nd server - I found some examples and gave it a half hearted attempt, but couldn’t get it working.

Option 4 - I finally found a very nice node.js script that can access the wifi dongle directly, and grabs the latest data off the dongle. I’m familiar with javascript and it was very easy to run this script. With a small addition to the code, it can send the power data directly to the emonCMS.

This script has to be left running on a device on your local wifi network. As I didn’t want to leave the laptop on forever, and don’t have a Raspberry Pi, I actually got node.js running on an old spare android phone using an android app called ‘Termux’, and pulled the code onto the phone via git.

Hi @jonshutt ; I have a Solis Inverter c/w Ginlong data stick, but could never get it to provide any data - not helped by the pretty dire Ginlong iOS app. It’s been a while since I last tried to sort it out, and my inverter is currently offline (keeps tripping the consumer panel), but I’ll PM you when I next try to sort things out.

I think it would be a good idea to publish it here, if you would. The information will then be available to anyone at any time in the future.

Oh Nice, will be looking into this, getting a solis inverter installed next week and planning on monitoring it using emontx, and have another pi running the emonbase.

I’ve forked the original repo and added the bit that connects to the emoncms. 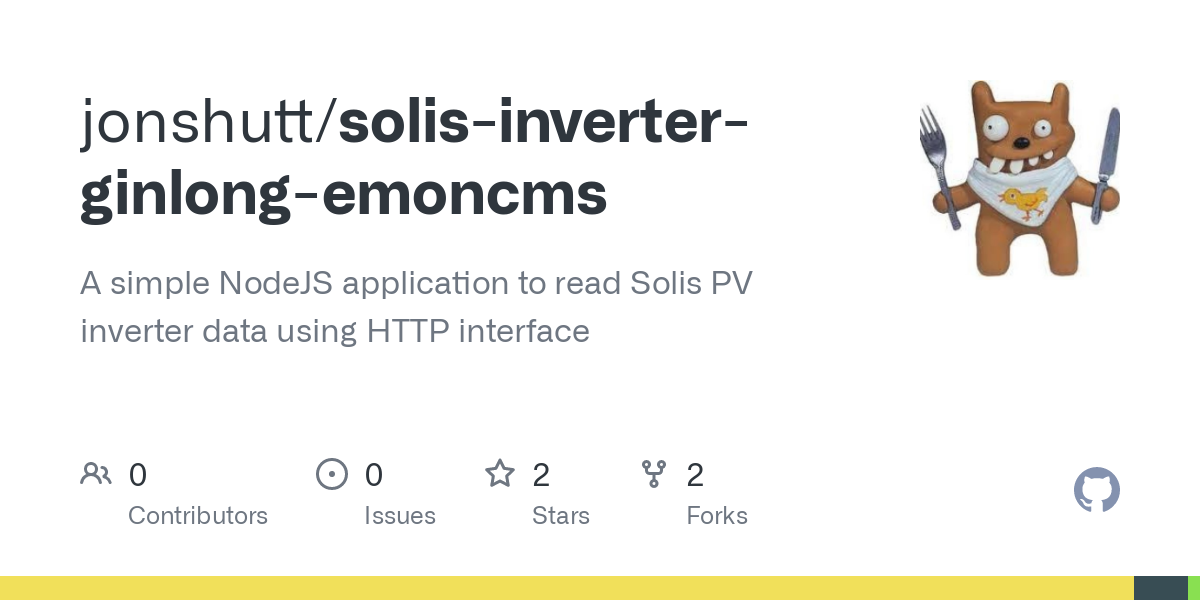 I’ve added a basic readme file, hopefully it’ll help people. Any questions let me know.
You can set the node it sends to - you should see data appearing into the ‘inputs’ section of emoncms - then you need to set up the feed/apps as you need.

As mentioned before, I’m running this on an old android - but it’ll run on anything that can run node.js.
The git repo credits the person who wrote that bit that gets the data off the wifi stick - so any questions around how that works probably best asking them!