Who has an Mbus heat meter on their heat pump?

I am interested in ‘zooming in’ on real-time graphs, and looking at the finer details. I’m finding it quite daunting since every unit seems different, and unexpectedly different in various conditions
e.g. this snip of an ASHP. The COP is well below what it should be for 20mins into each run cycle. I have no idea why it is so bad here. I would be interested in looking at other ones to see how they compare. I have added the manufacturers COP for reference. 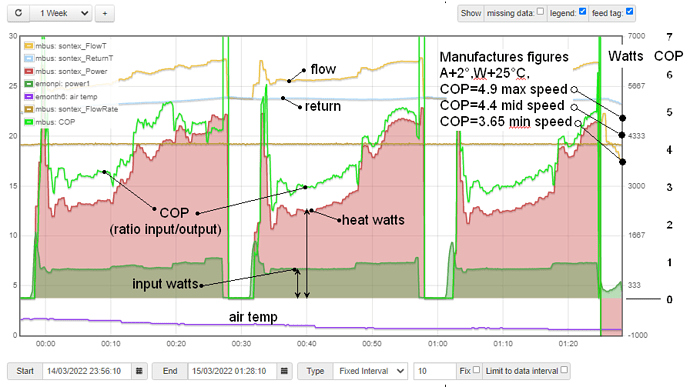 @johncantor Plot attached from my NIBE F2040-8 for a HP cycle under similar conditions to the one in your post. External temp around 2degC and flow temp around 26 to 27 degC. COP is fairly stable over the cycle averaging 4.6 which is consistent with NIBE manufacturers published data for those conditions. Initial rise in power to ~700W for a couple of minutes at start of cycle is typical of NIBEs. Heat data is derived from high frequency 1Wh pulse data rather than MBUS (which I have ready to install but haven’t yet got around to doing it) 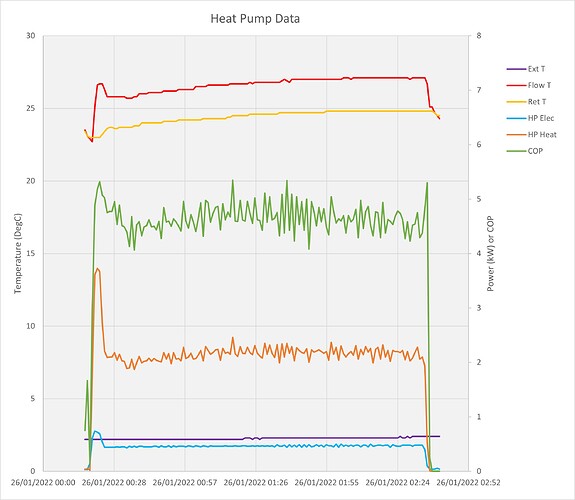 Many thanks Jez, that looks impressive, as one might expect from the ‘Volvo’ of heat pumps. Nibe have been at it much longer than most. That is quite low (wide operation range) at just over 2kW. So,… I have been seeking out the bad stuff… and I’m guessing that you machine might not do much of it. e.g. I am looking at a Samsung doing some awful cycling… not due to the machine, but due to there being not enough radiators in circuit at certain times. However, it would not be difficult (I think) for the ASHP control to know when conditions are not ideal, and do the best of a bad job rather than continue inefficiently. I would be interested to see the worst bits of your data. Maybe there aren’t any!

@johncantor John - I keep my system open valve most of the time (using Evohome rad valves set at 30degC) and there is a 40 litre volumiser - so no chance of my system not having enough volume in the heating circuit. NIBE controllers (mine is an S40) also use degree minute control which limits any low demand short cycling behaviour. Most cycling in my system is due to defrosting on cold humid days, in particular when heating up in the morning from the night setback. The NIBE controller has a 40 minute minimum cycle duration under defrost conditions and a 6 minute cycle off time, so it never gets that bad - though of course the COP will degrade towards the end of a cycle as the frost builds up on the evaporator. The F2040 uses R410a, but NIBE have finally introduced an R290 unit (F2125) which could perhaps behave differently. Plot below shows data for my system on a cold foggy morning with two cycles where there was lots of evaporator frosting. Flow temperature is in the range 30 to 37degC which is higher than the default heating curve for the external temperature (2 to 3 degC) due to the adaptive internal temperature control adjusting the curve upwards. COPs are generally consistent with manufacturers data from the flow temperatures/external temperature except at the end of the cycles (due to the high level of frosting at that point). My only real complaint with the NIBE is that it will sometimes go into defrost mode when not necessary.
Jez 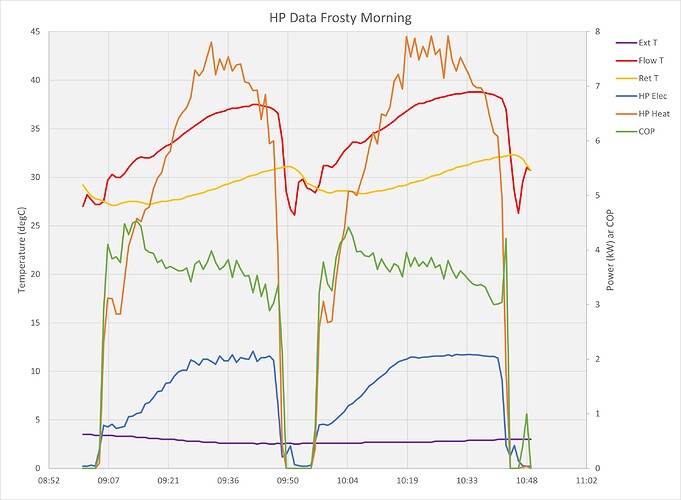