I have a feed for Wh counter, using pulsecount with Wh accumulator process.

While the pulse counter advances normally, I have experienced peculiar jumps in accumulated Wh values. Anyone else noticed this kind of glitches?

Of course, this makes the use of Wh accumulator pretty much useless, since the values are completely off. 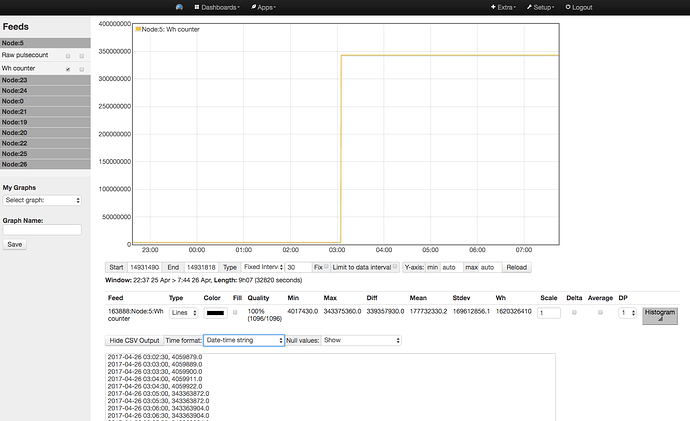 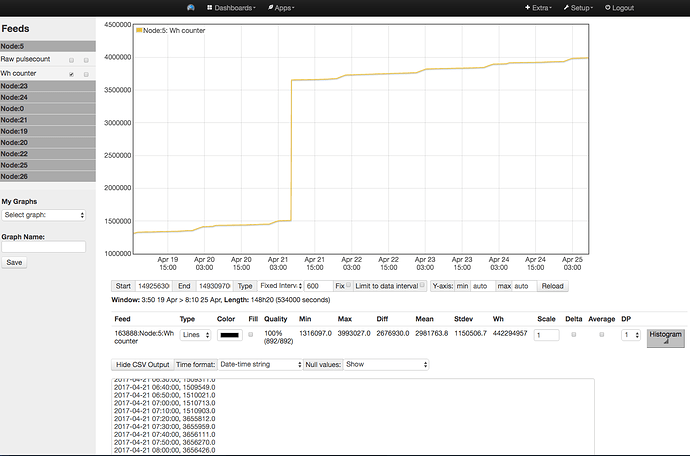 I have seen odd behaviour thaqt could be explained by exactly this but I have not had time to track it down. I have seen problems where the daily kWh is impossible (5,000 etc.) on random days. I will try to look, but there is so much data - jumps like this would make sense in that case.

i had the same problem (vertical rise)
for me i was attempting to use schedule - it would stop counting when the schedule cut in (as the logic set the feed to zero), but then pick up as soon as the schedule ended (as it would pick up the count which continued in the background.

Hi all,
I had the same issue when arduino is rebooting for some reasons. The first measured values are very high and are altering the outcome for daily WH counter. I think can be avoided with a minor modification in the emontx sketch.
I hope it helps.

Are you using a very old version of emonLib?
The high pass filter that was used to remove the d.c. component of voltage and current did show high values for the first few sets of values as the filter settled to the correct d.c. level, but it was replaced a couple of years ago by a low pass filter that is initialised to the nominal value. There may still be a small step in the initial readings. Its size will depend on the accuracy of the d.c. bias on each input, but the step is nowhere near as big as before.

I have to check the emonlib version. Note that the values were for pulse count, not clamp sensors.

In that case, it will not be that emonLib problem, which will only affect the voltage and current (and therefore power) measured by the a.c. adapter and current transformer.