Robin Emley, the designer of the Mk2 PV Router and proprietor of mk2pvrouter.co.uk has sent me a message about a clone current transformer he’s found. It appears that an unscrupulous trader is selling “look-alike” YHDC SCT-013-000 current transformers under the label YHDQ. Here’s what he wrote:

Getting hold of genuine YHDC SCT-013-000 CTs can be a tricky business. I have bought some directly from the manufacturer, but mainly they have come from an outlet on Ali Express called “TZT teng official store”. With my stock down to only a dozen, I was pleased when another 100 turned up yesterday from that source.

Unfortunately, they are not the same beast. They are lighter, the cable is thinner, and the coil resistance is closer to 200Ω than 100Ω. And when I checked their behaviour, the resulting waveform becomes flat-topped at anything over 5A (ASCII files attached). So, in short, they are useless! Thankfully, the labelling is different in that the logo has been subtly changed from YHDC to YHDQ, and the YHDC web address is absent. Otherwise, to the casual observer, they look essentially the same device as before.

The two side by side: And Robin’s plots of the waveforms…

With all 4 on the same graph, the limitation is even more apparent: 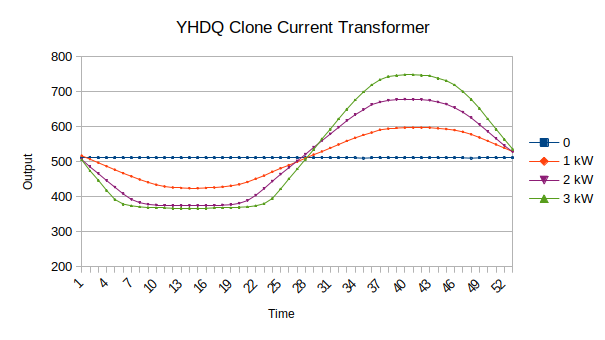 Thanks for the warning. Going through my CTs, unfortunately I found one of my spares was a YHDQ SCT013 CT, with R~175 ohms. I can’t remember when or where I bought it.

Looking at Robins’ plot for the YHDQ version, the ‘flat-topping’ is asymmetrical, with more compression in the negative direction than the positive direction. This is most visible in the 3kW plot. The plots give the ADC counts rather than voltage, and don’t give the burden resistor or the ADC reference, but one would guess that the ADC reference was 5V or 3.3V

Magnetic saturation of an unmagnetised core alone is usually roughly symmetrical, so this seemed a bit suspicious.

Roberts’ report on the YHDC SCT013 (Learn | OpenEnergyMonitor)
shows there is a symmetrical bidirectional transient suppression diode across the coil. The diode conducts at +/- 9.2V to limit the CT output when the burden resistor is not attached.

I thought I would have a look at my YHDQ version - and found a similar SOD-123 surface mount device on the PCB, again presumably across the coil. It had an SMD code of WP.

Googling this, (not always conclusive) the most likely device seemed to be a BZT52-C22 22V zener diode. This would explain the asymmetry if the coil+burden output voltage was above about 0.6V, - as it will conduct at ~ -0.6/+22V.

The sketch that produced those plots, and the cicuit diagrams of the Mk2 PV Router, are available for downloading from his website. There’s a link above.

Thanks for the information, Robert. It allows a more detailed look at the numbers - if I can get my sums right!

From the numbers in Robins’ text files

So it looks like with the 150 ohm burden, the YHDQ negative output is being limited to about -700 mV at 2kW and above. Perhaps the SMD code of WP does mean a zener diode!

Either way, Robin is right: “USELESS”.

You know it’s getting bad when the Chinese start producing counterfeits of a product
produced in their own country.

You should not be using that, the actual secondary turns will probably not be exactly 2000, but tweaked a little in production for best overall current ratio accuracy. We don’t know what it is, nor do we care. What we do know is the current ratio, which is 100 A : 50 mA.

Presumably the core is saturating at higher currents so is the wrong sort of ferrite entirely,

I don’t see evidence of that - what I do see is support for @rupert’s hypothesis that there’s a single zener diode across the output, which is asymmetrically limiting the output voltage. Without characterising the device with and without the zener diode, I wouldn’t like to pass further comment.

Thanks to Robert for posting Robin Emley’s findings and also to Robert and Rupert for the technical explanations which I find very interesting. I checked a recent purchase and it is a clone YHDQ, it is now on its way back to Amazon for a refund.

And the more people who do this, the sooner Amazon will dump the seller.