Is emonESP firmware compatible with ESP-07S?

emonESP github project page says the requirement for emonESP is ESP-12E, and I had an experience of using ESP-12E (nodemcu clone to be exact, with ESP-12E module).

It’s was working great until I put it in a metal box and found out that wifi signal (transmit and receive) was reduced significantly. So personally I think to have an option of using external antenna is a must, and at the moment I am looking at ESP-07S module.

Unfortunately I cannot test it because ESP-07S module is not locally available in my country - I have to order it on aliexpress which will take 3 weeks or more until it arrive.
Also I want to make sure that emonESP firmware is fully compatible with ESP-07S before I order the unit

Any advice is really appreciated.

Sorry, I have only tested emonESP with ESP-12E. How is ESP-07S different?

Thanks for your feedback. I’ve tried googling for official datasheet of ESP-07S but cannot find it, so I am not sure what the differences are in detail.
I just worried if ESP-07S have different memory addressing or something like that that will cause problems when installing emonESP (tested on ESP-12E) firmware to ESP-07S.

So do you think it should work, as long as it has 4M flash?

Also I suggest - if you have not - you should try put the ESP-12E in an enclosure and check the quality of wifi signal (transmit and receive) - specifically enclosure made of metal. Judging from the photos from emonESP documentation, it is put outside the enclosure during testing - but well understood it is still under development stage.

Yes, the ESP won’t work too well inside the emonTx enclosure unless it is positioned so it’s antenna is next to the plastic fascia. If the ESP-07S has 4MB of flash it should work fine.

Thanks for the advice, Glyn. I’ll give it a shot then!

Let me know how you get on!

I had some success with getting it running on the ESP01 with 512Kb of flash so it should work on any ESP8266 module, the only feature you lose is OTA update if you have less than 1MB.

To add to this, I have also done testing with the ESP01 with 1MB flash and everything works even the OTA (at least uploading through the webui). The ESP07 should work just fine.

The huzzah breakouts are really nice though because they just slip over the programming header once they are modified to swap Rx and TX. They also have the 3.3v regulator built in too.

Thanks for the confirmation, Jeremy and Bryan, now I’m convinced!

Finally the unit has arrived today! 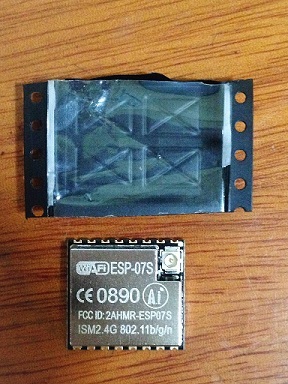 As soon as I have the time, I will test and report back!

Hi all,
I can confirm that flash size of ESP-07S is 4M. So, if you use arduino ide for loading the firmware use 4M for flash size.

Great and thanks @stefandumitrica, can’t wait to test mine!

I also use ESP07S to do programming. I figured out to use ESP8266-12E with arduino IDE (NodeMCU 1.0-ESP 12E) to do compile, upload and running without any error. I was happy with this experiences. Things happened when I used the same code, the same arduino IDE setting (NodeMCU 1.0-ESP 12E) to burn the same code developed by ESP8266-12E module to ESP07S, all GPIO from ESP07S user manual ( ESP07S ESP-07S User Manual (WIFI MODULE) by Shenzhen Ai-Thinker Technology ) are twisted. Nothing is working, the board keep rebooting. AND I exactly follow ESP07S GPIO setting. I also tried to use GPIO2,14(SCL/SDA) from ESP07S user manual to connect a LCD module and tried to print some characteristic on to it. Nothing is working at all.

Does anybody know what’s happening here ???