I’m pulling data through into MySQL via node-red, but the format is like this: 1611409677752. Do I need to adjust this in MySQL to get the kWh value or am i pulling the wrong item through? Thanks 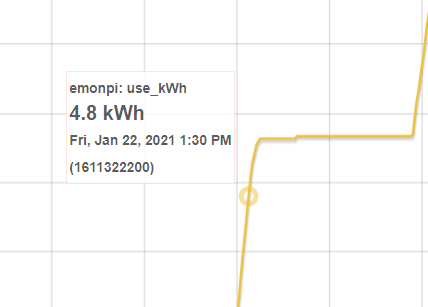 I don’t know what to use in the MQTT input to pull through the 4.8kWh value. Any ideas. At the moment i have emon/emonpi/use_kWh as the topic

the function is pulling through msg.topic and msg.payload. The msg.payload value is the ‘timestamp’ value that I would have thought would be kWh

I don’t work by Unix time

so I didn’t recognise the number. I’ve no knowledge of MQTT or nodered, you need somebody who understands those.

Use an MQTT app to explore the MQTT data structure.

Any topic added to the base topic emon will act as an input to emoncms.

I’m pulling data through into MySQL via node-red