I have a v5 OpenEVSE, and was using the ESP8266 wifi module. Everything worked.

I wanted to update to the ESP32 wifi module, so I updated the EVSE firmware to D7.1.6 successfully before getting the ESP32 module.

I get the new ESP32 module directly from openevse.co.uk and find out the connector is different (JST connector vs 0.1" header), so I cut off the JST connector and soldered a header, keeping the pinout the same.

Installed the new ESP32 module and got the wifi connected, but the wifi interface says “OpenEVSE not responding or not connected”. The ESP32 is running firmware 4.1.1.

Did I swap the tx/rx wires? I did a LOT of research and I can only find a brief thing about the ESP32 module needing more power than the 5v from EVSE can provide, and my v5 board doesn’t supply the 12v line in that connector to the ESP32, so maybe I just need to provide a 12v signal to that pin? The ESP32 is working fine, just won’t talk to the EVSE (the RAPI packets aren’t being received…?).

Fixed the issue; I had wired the connector wrong…here is the CORRECT wiring that is working:

IN ADDITION, I had to make sure to power the ESP32 from the 12v → 5v buck converter that was used to power the ESP8266. I saw a comment somewhere that said the OpenEVSE 5v doesn’t have enough current to power the wifi module(s).

The OpenEVSE WiFi module has a built in buck converter so you can power it directly from the 12v line of the EVSE module. 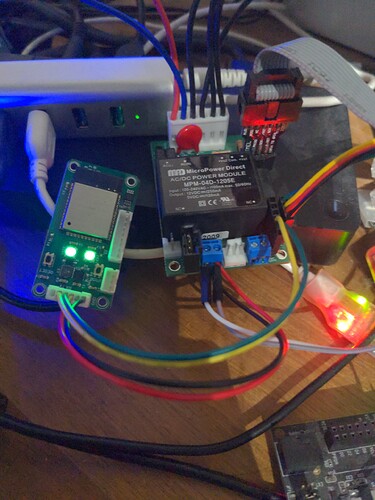 Thanks @jeremypoulter, I didn’t know the wifi module had this capability. If I had known that, it may have saved me some time, but as it is now, it’s working, so I’ll probably leave it alone for now.