Trying to save Gas - can I run UFH with Boiler Flow low at 45deg- and no mixer?

Hi
I love Openenergy - use emonPi at work, in our church hall; and at home.

I’ve searched the forums in vain - so asking here. (I am tech savvy-ish - degree in electronics)

Our church hall is heated with UFH: the boiler packed up - new one coming soon. It will support modulating down to lower flame %, being newer.

a) set the Boiler flow to 45 degrees
b) remove the existing Mixer (was needed with the old boiler when set to 70: to mix down to 45 suitable for UFH).

Q2 - will the gas boiler efficiency be unhappy, if it runs at deltaT of 7-10deg (typical for UFH , so far as I read) rather than ~ 20 (typical for most houses on radiators)

I’ve spoken to several boiler fitters - they are all ‘cautious’: want to leave everything as it is.

But the mixer actuator is a bit old+ stiff… so they want another £1,200 to replace it.

But - thinking engineering - it would be simpler to remove the mixer -and also make monitoring it easier - no ‘fighting’ between boiler water temp and mixer water temp (and the variation in flow volumes as the mixer adjusts).

There is a Low Less Header between the boiler and the rest: so the water flow rates are decoupled : boiler can do it’s thing: UFH can run at it’s own litres/minute;

Yes, in theory.
The problem comes with the size of the boiler and how low it can modulate down to.

Most boilers are oversized for there application (to ensure good “performance”), and while some can modulate down to 20-30%, some can only down to 50-60%, which may not be low enough for you.

Also, most home have boilers/radiatiors spec’ed to Delta T 50, i.e. a 50C difference between flow/return, NOT DT10.

The lower the DT, the better as most boilers these days are “condensing” boilers. These boilers boost efficiency by capturing waste heat that’s just about to leave via the flue. The problem is this only works if the temperature of the returned water is below 55C, but the lower the better, a return temperature of 30C will capture pretty much all of the waste heat in the exhaust.
The only caveat is that as the flow temperature goes down, the heatup time of the building goes up. Which brings us to radiators (or UFH in your case), as long as the heat can be dumped into the room fast enough the heatup times can be managed, but the issue in most houses is that the radiators are woefully undersized and only ‘work’ because stupidly high flow temperatures used (70C+), which of course craters the efficiency of the boiler (more gas used for less heat).
I’d guess that 90% of boilers in UK homes don’t condense (i.e. run at max efficiency) for more than 5 mins at startup. Which makes a mockery of the big switch to condensing boilers a few years ago.

Can you tell I have temperature sensors watching the flow/return logging to EmonCMS?

I am a heating engineer and my advice would be to talk to Viessmann technical and see what they say. The price of £1200 to replace the mixing valve seems somewhat excessive even for a ESBE make which are probaly one of the best. FWIW I have installed a complete UFH system in a 400 cubic metre house with an ASHP and that had mixing valves included. The correct size of the LLH is important, again Viessmann technical can help with that.

remove the existing Mixer (was needed with the old boiler when set to 70: to mix down to 45 suitable for UFH)

Why remove the mixing valve? It will simply sit there an do nothing if you run the boiler cooler.

45° seems high for UFH (toasty on the toes), however. At home mine is a max of just over 30, but this is feeding from a buffer tank (and I need to fit a Shelly TRV to vary it).

yes- the Mixer we would leave in situ; fixed to non-mix position

We’ve run it at that level for some years - the floor surface never feels too hot.

And return flow is by definition lower of course - so average across the pirework temperature more like 40.

The problem comes with the size of the boiler and how low it can modulate down to.

I’ve googled widely, but can’t find any boiler efficiency charts form the manufacturers when down at the lowest modulation.

The only caveat is that as the flow temperature goes down, the heatup time of the building goes up.

Yes - but as it’s a big hall, thermal mass is high - so the heating controller is set to start hours before the hall is needed. And the UFH itself has high thermal mass (wooden floor, on screed layer: This is the floor sandwich from those 2012 docs 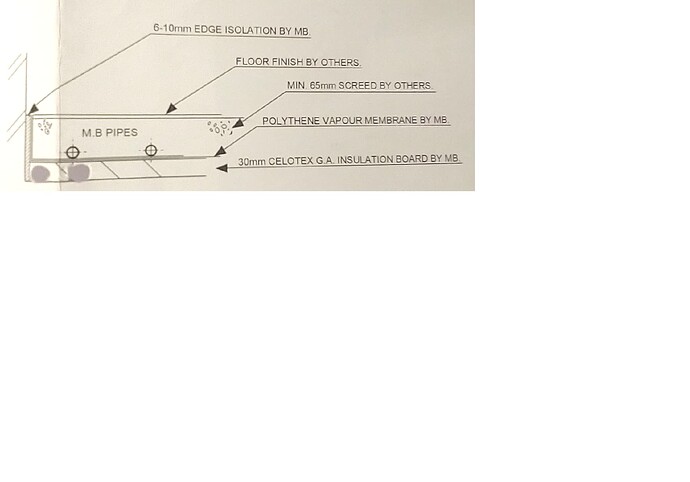 The UFH engineering design docs from 12 years ago, say the uFH work
was designed to output the required volume of heat… hopefully they did the sums right!

Wow, 30mm of insulation under the screed, that’s a bit thin!
Are both those condensing boilers?
What’s the size of the heated floor?

Condensing boilers - yes - old one was too. But did not seem to modulate at all - according to our OEM sensors of pipe temps over ~ 2 years. Lots of hunting.

Floor insulation: 30mm is what the engineering folder says they installed.

It’s a big hall don’t forget - so 90 percent of the UFH is more than 3 metres horizontally to ‘outside earth’ . Ie a lump of earth under the main floor will be heated but won’t lose much heat as it is ‘insulated’ by metres of earth around it.

Or am I talking rubbish?!

What’s the size of the heated floor?

Its a church of england church - Built in the 1950’s in canterbury after it was bombed in WW2
So it;s big. Guestimate 20m by 60m

Actually, the design docs say UFH flow of 55 and return of 45 ! Looking back over last couple of years: it was fiddled between 55 and sometimes down to 50 and even 45.

So maybe we will run it back at 55 as designed, once new boiler in?

but can’t find any boiler efficiency charts form the manufacturers when down at the lowest modulation.

Although this doesn’t answer your question, I found John’s video quite informative: 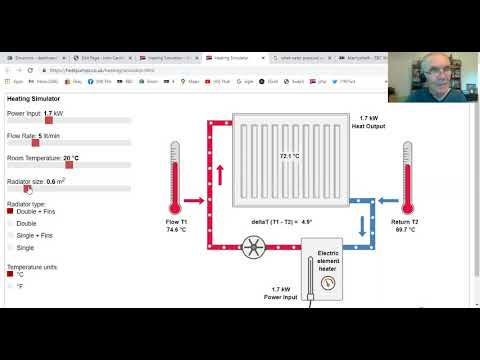 thanks @MyForest - that is helpful background!

Here’s a fact I uncovered this week - that is maybe not well known.

Gas Boilers are often rated at some KW output at some Flow/Return temperatures - often most efficient for condensing at 50/30 degrees - so many manufacturers quote that. aka a deltaT of 20 degrees (because 50-30=20)

BUT - a gas boiler does NOT try to maintain a deltaT - it ONLY tries to maintain the set Flow temp.

That’s what the tech guys at ViessMann boilers told me.

So - at OEM when people are planning for HP and monitoring their current gas system; wonder if that help will clarify things.

PS - people ask why heating engineering is much vaguer than electrical: and why so much advice on forums etc is less ‘true’

Water and electricity both flow inside copper. Water requires a hole down the middle, electricity - not always.

Apparently electricity (AC) flows on the OUTSIDE of the copper - but that physics is beyond me.

I popped a 120A fuse yesterday - the bang as the short occured gave me quite an adrenaline rush! (be careful with 3-phase Shelley devices 3EM: the connectors are far too close together…)

BUT - a gas boiler does NOT try to maintain a deltaT - it ONLY tries to maintain the set Flow temp.

Yes, absolutely. The setting on the boiler, often a 1-9 rather then 20C-90C is the flow output. It’ll start off at full blast, then if the flow is getting too hot (i.e. the return is too high) it will modulate down, if it can’t modulate further, it’ll shut down.

If the flow/return are too hot to run in condensing mode, well, that’s what you wanted sir.

Apparently electricity (AC) flows on the OUTSIDE of the copper…

That’s the skin effect. Holds true until the frequency of the AC is about 2 GHz.
At frequencies higher than that, wires don’t work well, or at all, so we we push it through the inside
of the “conductor,” which is called waveguide.

Seems crazy to me to heat the water up to 70C and then drop it immediately again to 45C. This is thermodynamically inefficient. And it reduces the boiler’s ability to condense, which is also inefficient. If you run the boiler at 45C won’t it still deliver a similar kW, or even more, into the water? After all the cooler the water the more heat the boiler thinks it needs to deliver. I am no heating engineer though.

Our church has 2 gas boilers running at 70C into a low loss header. The standard rads are at 70C. So can’t talk about UFH.

Won’t the CofE put pressure on you to go to Heat Pumps to meet their new zero by 2030 target? With UFH already instated you are half way there. We have no chance of getting UFL and heat pumps to work in a draughty essentially Victorian church.

That’s the skin effect. Holds true until the frequency of the AC is about 2 GHz.
At frequencies higher than that, wires don’t work well, or at all, so we we push it through the inside
of the “conductor,” which is called waveguide.

Some say it does not even do that. They say it flows as electrical and magnetic fields outside the wire altogether, even if DC. Interesting videos on YouTube about this now, such as The Big Misconception About Electricity - YouTube Is perhaps just 2 entirely correct perspectives of the same thing.

Seems crazy to me to heat the water up to 70C and then drop it immediately again to 45C.

Yes - most everone is supporting our call on that.

Won’t the CofE put pressure on you to go to Heat Pumps to meet their new zero by 2030 target?