I’m having some trouble configuring my Energy Meter. I have installed EmonCMS on a RaspberryPi 3 model B. I have configured EmonPi on the Raspberry and added the Circuit Setup SSPEM, and now I’m trying to access EmonESP but I can’t figure out a few things while following the steps detailed in Split-Single-Phase-Energy-Meter/Software/EmonESP at master · CircuitSetup/Split-Single-Phase-Energy-Meter · GitHub

At first I navigated to (http://192.168.4.1/) from the Raspberry and connected to ESP_XXXX WiFi. Once I configured the network, I connected via WiFi to a local network, so now I’m working from emonesp.local/ 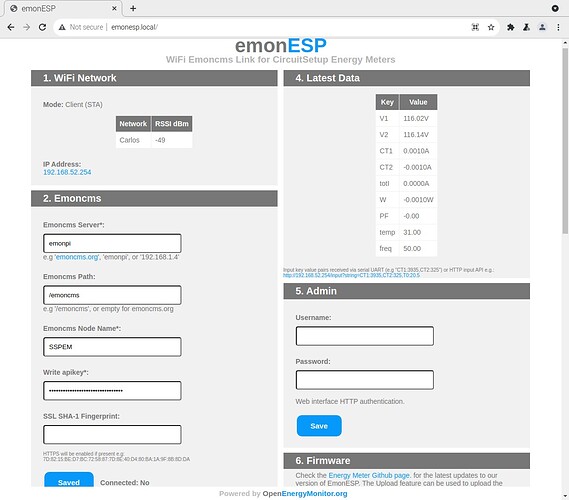 As you can see, I’m receiving data of Voltage, Temperatura and Frequency (I haven´t connected current transformers yet) so it seems to be working. But when it comes to EmonCMS, which, as far as i understand, is the place where all the data will be storaged, I can’t connect to it (Point 2. EmonCMS). I have created a device named SSPEM (which I think is the Node Name), but I have some doubts with the field “Write apikey”. Is it the same as the field “Device access key” located in emonpi/device/view? 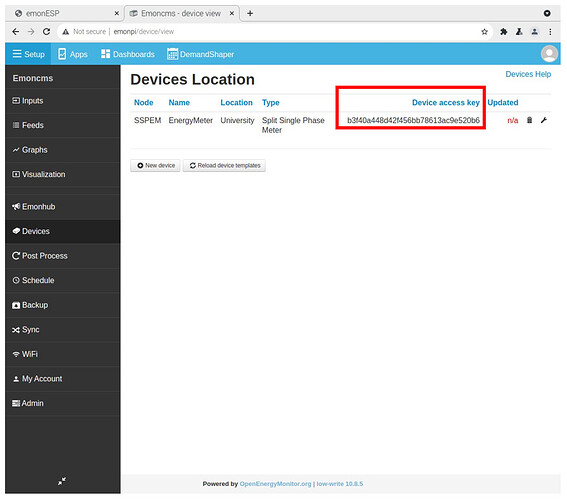 Just to make sure, I am using a Raspberry which is empty. It only has EmonCMS installed using EmonCMS Install Scripts as stated here:

Have you got a working DNS on your system? I am not a networking expert, but I would suggest putting the “dotted IP address” of your Raspberry Pi into the ESP, under “Emoncms Server*” where you presently have “emonpi”.

Your router will give you the address (my emonPi is 192.168.1.72 - yours will be different). You should set this address to be fixed and permanent - do this in the router.

The data should then appear on the Inputs page of emonCMS.

There was definitely something wrong with IP configuration, thanks!

I think what you were missing was DNS. Without a local DNS that would provide the link between “emonpi” – the name you’d programmed into the ESP – and “192.168.1.72”, or whatever address your router gave to the emonPi, your local network knew nothing about “emonpi” and couldn’t connect the ESP to it.

For locally connected hosts, there’s the hosts file.
Info on what it is and why it’s used at the link below.
https://www.thegeekdiary.com/understanding-etc-hosts-file-in-linux/

It went down again nooo. Haha I don’t even know how i fixed it the other day, how can I know from the Pi which address is emonPi at? I am not an expert in Linux based systems by any means

Log in to your router, and find the screen or table that lists all the devices connected to it.

Find the address of your Raspberry Pi and write it down. Now look for an on-screen switch or option that allows you to make that address permanent (or “fixed”, or “static”, or “always use this”), or words like that.
Do this.

Now go back to your ESP and put that address in the box “Emoncms Server*” where you originally had “emonpi” in your picture above.

Done. It’s working again, I guess the address had changed. Thank you very much!

I did tell you to make the address permanent the first time.

One more thing. I purchased a Split Single Phase Energy Meter from Circuit Setup, and featuring a ATM90E32 the sampling limit becomes the SPI bus and storing the data (I think it can sample as fast as 100ms or even more). Am I wrong or by using EmonCMS I can only read data every 5 seconds? I feel like openenergymonitor is more like a home monitoring system than what I need for industrial measurement. And it’s fine, i will just have to move to another options.The only way I see I can download data is from CSV output, and it’s only every 5 seconds, which doesn’t fit what I need to do at all.

Anyway, thanks for your help once again.

I’ve only been answering your questions - it’s true that the whole OEM concept is based on home energy monitoring, but that hasn’t stopped other industrial users (and by the way, this is the first time you mentioned industry) from using it.

I think you might be unclear about what you are measuring compared to what you need to know, but with only knowing what you’ve written here about your application, I can only do what I’ve done so far, which is answer your direct questions.

Oh no sorrry, i didn’t pretend to sound rude. I am very grateful for all your help.

I was just setting up EmonCMS to get used to it by measuring conssumption in a laboratory, but in the end what I pretend to do is to install it to measure the conssumption of an electric press, so I need to sample as fast as possible for predictive mainteinance.

Again, sorry if I was rude, I’m not an english native speaker but I try my best.

Sorry and thanks for your time.

So I would expect, for your press, that you will need to know the number of operations, and from that the operating rate (operations per unit time), and the power consumed. Together, these would allow an estimate of the mechanical stresses being experienced, as well as giving you the total operating time and number of operations.

You clearly know the apparatus in detail, while I know nothing about it. But I would have expected that the average over a short period, 5 or 10 seconds, of power, together with the number of operations over the same period, would give you enough information - I would think that there’s a big danger that you will have too much data and not be able to extract the information that is significant.

Don’t worry about your English, it’s better than some English people I know.