I’ve just set up emoncms with a emontx but I’m getting some strange graphs being generated.

Quick run down of the hardware I have:

Quick paint diagram to show how things are connected up, the CT sensors are all inside the CU but I thought this would be clearer: 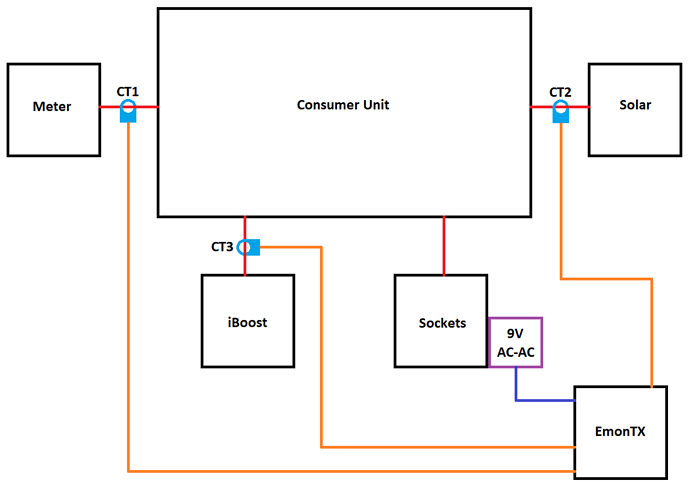 As for the input section in emoncms:

I set up the ‘My Solar Divert’ app which happily generated the following graph: 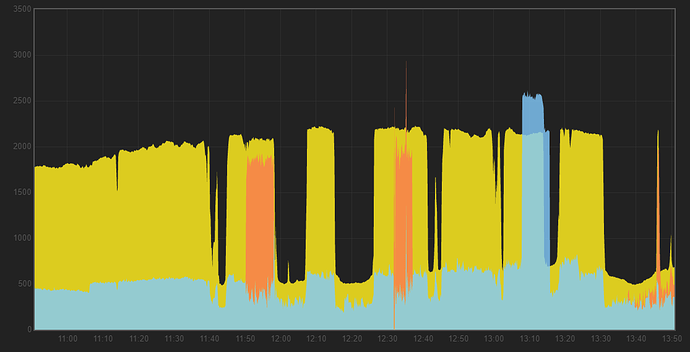 It mostly looks good but I’m confused why the Usage (blue) is jumping up/down by 300W as the Solar (yellow) comes on/off. The only obvious device that should start using electricity based on import/export is the iBoost (orange) and it isn’t. To confirm this theory, I flipped the iBoost MCB and there was no change. 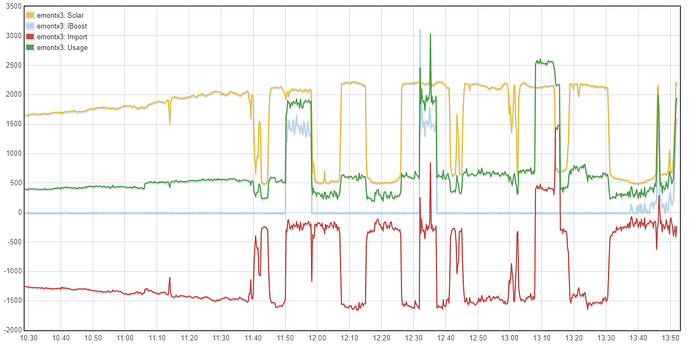 At the moment, I have two ideas that could be causing this:

I have seen similar behaviour to this when a split-core CT isn’t fully closed, I suspect the same could occur with a broken/cracked CT too. When a CT isn’t fully closed/intact, it can give an erroneous reading and that error can often be seen this way as (for example) if the PV CT wasn’t reading correctly (eg only 80% of expected sensitivity) then when the solar changes by 800w, the grid CT correctly detects a 1000w change, thus your calculated consumption will change to reflect the 200w error.

In my case, if CT1 (Import) were to under read during generation, it would appear that less power is being exported and therefore the house usage would over read. Given CT1 is around a relatively large cable an airgap in the split-core is certainly plausible.

I’ll take a closer look and report back.

Seems much happier after fiddling with the CT’s this morning, spot on advice

Indeed. In testing, I introduced an air gap of 0.1 mm in one side of the core of our standard SCT-013-000, and the amplitude dropped by 7% and that was accompanied by a large phase shift.