the pin connections to the UART board TXD and RXD ??

Can anyone confirm that the pin connections to the UART board TXD and RXD are the same as the usual A and B connections on other RS485 connections, and does it matter which way round they are connected? Many thanks

Which UART board are you referring to?
TXD and RXD are usually associated with RS232, but you speak of the A and B connections
on an RS485 interface.

If your UART board is indeed RS232, it’s not compatible with an RS485 interface without additional hardware, i.e. an RS232 to RS485 adapter.

The answer to your second question is yes, it does matter.

For RS485, the names A and B are not always representative of the same polarity, i.e. it’s not consistent across all manufacturers. To ensure a correct RS485 connection, use the polarity designators
(marked Data+ and Data- or similar) as opposed to the A and B markings.

To make matters a bit more complicated, sometimes the terminals get mis-marked as is
the case with one particular piece of OEM hardware. 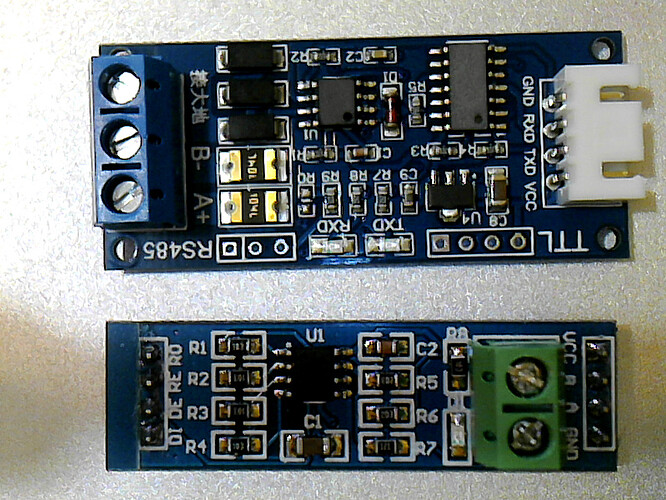 As I mentioned in my reply to the OP, we need more info, what board is he speaking about?
What specifically, does he mean by asking are TxD andRxD the same as A and B?

Regarding the adapters in your picture, the A/B terminals are not the same as the Tx/Rx terminals.

Each of the TTL terminals is dedicated to sending or receiving. Both of the RS485 terminals are required
to do either. (send or recv)

So, while they may perform similar functions, they’re not the same.

no worries I was just asking if they were referring to the rs485 that has the simple connection such as the above which is 4 wire that you can connect to common TTL connectors or the one below which is 5 -6 connection two extra to enable and disable send and receive .