If anyone might be Curious here an electric tractor I made out an old ford 8N and Toyota electric fork lift… it has ~6kw electric lithium battery works well it either go or spin out no other option in between . 6kw depending on the load is good for 1-1/2 hrs and up. I was grading my road with it today – works really really well. 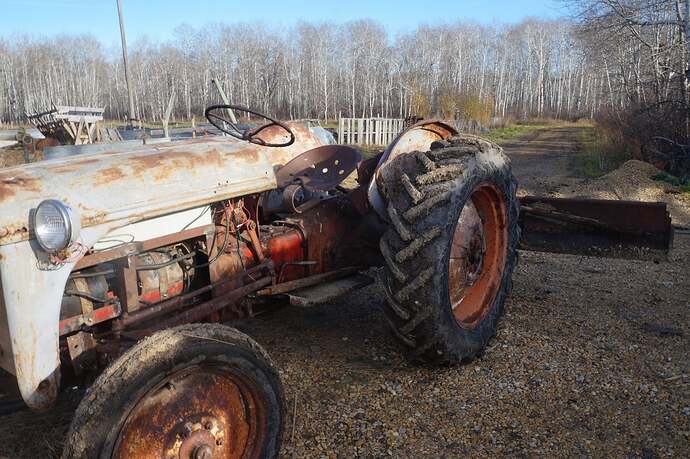 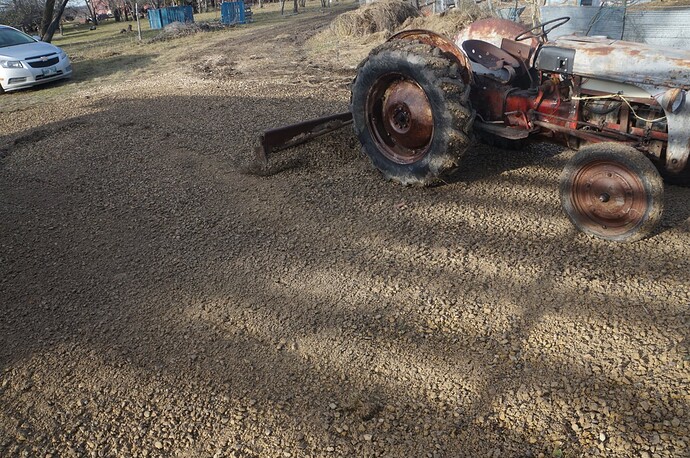 … I am just surprised how well it works and pulls and the ease of use . if I was richer man I would commission BYD for a blade battery that would fit it … that battery life cycle would be 50 years and I could squeeze 20 - 30 kwh under the hood

What’s really wild is they still supply quite a few of the parts for the 8Ns and 9Ns.
(I had a 1942 9N with a Dearborn 19-22 front-end loader on it, when I lived in Montana. I was very surprised to find out the local parts house had, or could get, parts for it)

Great little tractors. Built when things were made to last.

yeah – @Bill.Thomson I have another one that still runs this one was seized and in pieces . i personally like old farm equipment especially anything built pre 1980 when every thing was still built to last forever… then rolled around the 1980 and “Mary’s law of obsolesces” came into force and every thing went down hill from there to where we are today and everything is [email protected] and designed to fail… old tractor they either work or they don’t newer tractor man cheaply built and so many things can go wrong…
if curious I have alot of tractors old and newer
ford: N8 N9 , major all from the 50’s
Case; 730,830, 930 1030 ( 1960’s) and 1896 case ( 1990’s)
agco: 8610 ( 2000’s) and some newer Chinese tractors which are very nicely built and durable similar to 1960 built tractor for the most part and how over built they are. but have some design flaws. no noise dampening for the cab ( not rubber mounted)

What a lovely project. A make do and re-purpose culture is what’s needed today. Alas I have no use for a tractor, living in suburban southern England, but it’s still cool.

you could always drive to work with one

I’d love to learn more about your conversion! Do you have a blog or “how I did it” document? I thought the engine and transmission makes the frame of the 8N. Where did you put the electric motor?

Actually the Ford N series oil pan is the biggest part of the frame bridge and the front steering all bolt to it.
I do not have a blog for it, but here’s a written breakdown hopefully it is somewhat understandable.

Tractor teardown:
You take apart the engine. Keep the oil pan and clutch disc everything else is not needed.

Transmission pilot shaft: we need to stabilize the pilot shaft. I used a self centring bearing. I mounted the bearing to the oil pan so that the it holds the pilot shaft securely and centred. Now you can put the oil pan and transmission adapter on. (I made an aluminum washer for the back side of the adapter that prevented it from wanting to walk around)

Electric motor: I got it from an old Toyota electric fork lift. Using the same style weld-on sprocket, I made an adapter that fit the 48V electric motor and used a 3 inch sprocket there. Mount it on top of the oil pan, slide the sprocket under the bell housing and line them up with the transmission adapter sprocket, then mount the electric motor in place. Bolt the angle iron to the bell housing and a cross member and bolt the top of the electric motor to this so any top pressure of the bell housing is transferred to the motor and then into the oil pan creating a stable bridge. I built the battery box on top of this.
I used the electric components from the forklift, i.e. just the motor controller, one of the relays and the throttle control. I put a micro switch on the brake and clutch pedals so it disables the motor controller if stepped on. The speed is controlled by the N8 throttle. I also pulled the battery level and other dash board light stuff and mounted them on the N8. I installed a step down converter for 12 volt lights…

The whole project did not take too long, maybe 5 days. The longest bit was salvaging stuff and/or waiting for things to come in the mail.

Thanks! I am going to learn to weld and ask my friend if I can convert his 8N

here it is at work from a couple days ago since then there was a snow storm and it went from 0 snow to 40 cm of snow over night . it reasonably quiet other then the chain noise . but I will put a noise dampening cover over the bell housing then it should be down to to a slight whirl