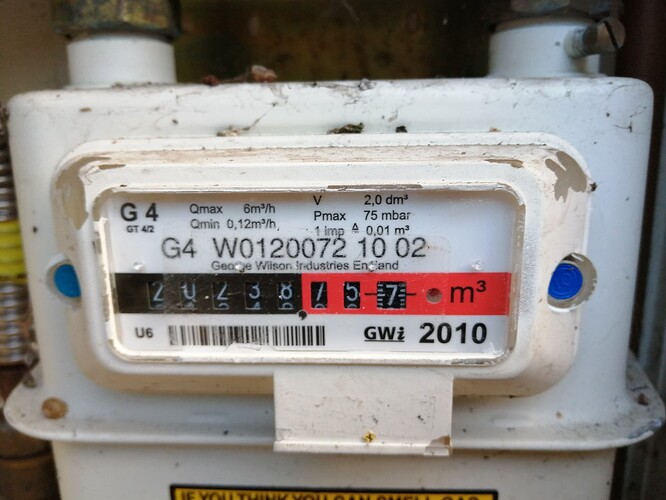 I have a gas meter as per the picture above, does anyone have any suggestion to monitor this particular meter please. At this time I am not sure if it has either a magnet or a reflective disc. In the circular hole to the left of the M is a red dot that doesn’t appear to do anything. I wondered if anyone has sucessfully fitted a monitoring device to this particular type of meter. Any help appreciated.

If you haven’t watched a complete revolution of the fastest register wheel, and there’s no reflective spot - usually in the centre of the ‘0’ digit, and held an ordinary magnetic compass to the glass as well, it’s the first thing I’d do.

The modern GWI meter can have a pulse output fitted (or added at any time) - according to the website, so it might be worth sending the serial no. of yours and asking the question.

If none of these come good, I think there’s little realistic chance of monitoring using that meter. I think I’ve read of some enterprising individual who has used a webcam and OCR software to literally read the register and send the numbers, but it does seem like a sledgehammer+nut approach.

There is a magnet on the right wheel. Can be picked up from the front with a simple A3144 magnetic sensor over the ‘GWi’ letters, but there are better low power sensors for battery devices.

I believe the imp is short for ‘impulse’. I checked my trade catalogue and I think that for the meter to have the pulse output facility it has a ‘P’ after its type so G4P. A pulse counting attachment can then be bought for approx. £60.00. I’ll look into your other suggestions and that of Chaveiro too. I’ll wait until the boiler is running to spin the wheel though! Price of gas and all.

I believe the imp is short for ‘impulse’.

And I think that plate under the decimal registers is highly significant too. If it isn’t for mounting something on, why is it there?

The ‘plate’ underneath the registers is in fact part of the front moulding and forms a rectangular box. The bottom face of the box has a knockout section that would fit a RJ45 connector. I think the meters with ‘P’ designation (G4P) would have an RJ45 socket there as the available pulse reader add on has such a plug. However, my meter does not have the ‘P’ designation nor the RJ45 socket.
Upon further investigation I found the rightmost index wheel does indeed have a reflective spot in the zero digit. I’ll dig out an old compass and see if there is a magnet too.
I now need to find a suitable sensor to use the reflective spot. I am sure I have seen something in the past on monitoring a meter index in that way.

There have been a few mentions of using the reflective spot - a search should find them. This is OK if you have mains power available at the meter, if you haven’t, it gets expensive in batteries unless you do something really clever in the software and power and poll the sensor for a few milliseconds every few hundred (or something like that). If you have a magnet, then a reed switch is a lot cheaper in terms of power consumption.

The power supply is no problem, I have mains available on the other side of the wall to the meter. I’ll use a small psu inside the house and provide 5 or 3.3 volt to the monitoring device. Doing a bit of research on reflective and hall sensors at the moment. I might have a hall sensor in the parts drawer so I plan to rig that up to see if I can detect a magnet. I’ve also dug out my Tesla / Gauss meter, so I’ll see if I can clean up the corrded contacts and get that working.

@bobcroft
My gas meter has a hole on the side in to which I believe the intent is to push a magnetic sensor.

A company called Smappee used to make an electricity usage monitor which used clamps, they also made both Gas and Water meter monitors which used either Optical readers or magnetic sensors.

It looks like they have discontinued all of these but their Gas/Water monitor would have done what you need.

These days for the UK I would be suggesting that the easiest solution is to have Smart Meters fitted. Then you can get a Glow CAD. The combined Glow in home display (IHD) and consumer access device (CAD) is  for people who'd like a real-time view of their energy consumption from their smart meters and access to that data via our Bright app, APIs and MQTT. Wifi enabled...

This connects to your smart meters - both Electric and Gas over their Zigbee based HAN - Home Area Network. (Not normal Zigbee.) You can then either access the data via Hildebrand’s cloud servers or they now also support MQTT for local access.

It will update data far more frequently than the DCC network.

Hi John,
Thank you for that imformation, at the moment we do not have smart meters and last time we asked EON were changing thier system and were not offering smart meters at that time. I’ll try again to see if we can get something installed.

Maybe there you will find something interesting: 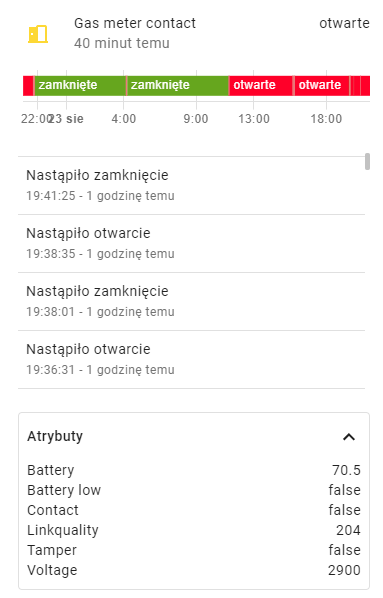 It is in Polish but Google Translator should be helpful enough.

I used a simple reed switch on mine. the magnet on the las wheel is powerfull enough.
of course a cheap 3144 hall sensor will also do the job …

Thank you for your reply. I am not certain my meter has a magnet though, I could not detect any magnetism with my gauss meter. It certainly has a reflective spot. I guess I had hoped that someone with that exact meter had fitted a sensor to it.

Previously, someone tried using a mobile phone to detect the magnet, and failed. However, a conventional compass revealed the presence of a magnet and it operated a simple reed switch. I cannot remember the make or model of the meter. A search here might be successful.

So before you embark on the optical method, I suggest trying a plain old magnetic compass, as per post no.2. @nchaveiro says there was a magnet in his similar meter.

Sometimes, the old and simple way turns out to be the best.