Someone needs to make a relay module

unfortunately the system can ‘revs up’ in a mild panic to get up to the target flow temperature, but you are showing here that this cold start ‘rev up’ isnt really a problem.

I confess that I cheated here, and limited the flow temp so that it wouldn’t get too excited [like MyForest does]. However, I don’t really like doing this as it adds more complication to the system, and is another thing to go wrong if I mess up. Sometimes the house struggles to get warm as a result. I’d prefer to let the HP do its own thing, overriding as little as possible. Interesting to experiment with though.

drop the target flow temp right down for a short while

I did give that sort of thing a try, but the Ecodan controller decides it’s no longer worth running and shut itself down quickly anyway. Maybe give it a try with your system and see how it behaves.

start immediately, without any forced pause

Hmm, I think I must be missing a reference in an earlier post where you are chatting about the pause.

If we gloss-over my stupid two-minute polling problem, you can see mine was: 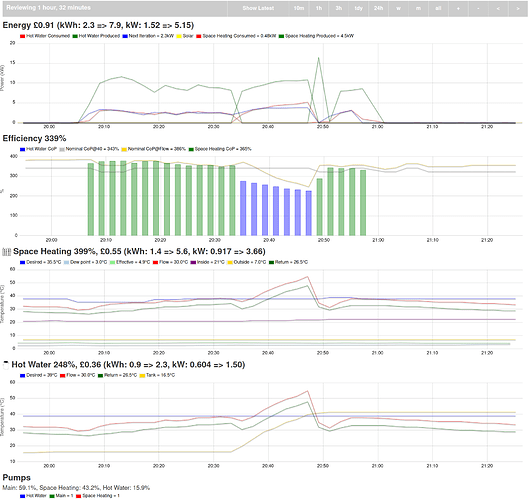 Are you seeing some other behaviour as you switch modes?

Bear in mind that mine is set to block hot water on the FTC5. It only ever goes over to DHW because my script turns on “forced hot water” mode.

Hmm, I think I must be missing a reference in an earlier post where you are chatting about the pause.

John proposed a simple relay that detects when the compressor turns off, and keeps it off for a certain period (the pause). The idea is to prevent it cycling so much, and let the flow temps drop a bit before starting a new cycle. This could improve COP overall.

I’ve been experimenting with a couple software implementations of a relay. One of the considerations I pointed out above is that we don’t want to put in a pause between the heating and hot water cycles, as per your chart.

If I were to implement this in hardware, I think I’d put the relay on the “call for heat” line from the thermostat, reading state of the compressor and 3-way valve. When compressor stops, turn off the call for heat, unless we were previously heating water.

If we gloss-over my stupid two-minute polling problem

I have just joined the two-minute polling club too

Apologies, I was being dim.

I know my complicated, expensive and hard-to-reproduce solution isn’t the answer, but this chunk of code is what’s been working well for me. I hate that it has so many magic numbers which are local to my setup. As Brian keeps reminding us, this will not get fine-tuned by the installer.

Anyway, feel free to use as much of that logic as you wish, I’ve put it online so you can see it.

@johncantor John - is that not what degree minute (DM) control would give you? Vaillant, NIBE and I think a few others manufacturers have it built into to their controllers. Example data from my NiBE F2040 8kW showing the heat/electric data for 3 cycles at low demand and also the DM data from the controller over the same period.
Jez

Yes indeed, and Nibe have been using degree mins for very many years. I guess many of the the air con derived systems have controls that are somewhat crude. Its a complex topic to grapple with.