Solar thermal and Stiebel Eltron DHC controlled by an ESP

Hi there not sure how many are using Solar thermals . But here a little ESP sketch for any one who do… what it does is control an electric Tankless water Heater (TWH) output . and monitors the solar thermal reserve tank to get the absolute best energy usage…

basically set the maximum water temp that the Tankless water heater will come on at. in this case 55C - if the solar thermal reserve is greater then or equal to 55C the TWH will not come on. if below 55C it will automatically adjust the energy output of the TWH to the maximum set temp of 55c . its accuracy is +/- 0.5 degrees Celsius once you have it configured optimally for your TWH

and it uses one NTC 10K we use this type of analogue sensor, because of the speed it is sampling at approximately 200 - 300 times per second on the ESP that I am using . and it will quickly adjust for rapidly changing environment

the math routine in the sketch is a basic bubble type search so the higher the rate of sample. the more accurate it will be a adjusting the SSR or TRIAC to match the energy requirement … I might at a later point make it control a solenoid valve control a mixing valve more accurately . probably not as accurate as the TWH is … but hopefully better then the 5- 10 C differential of normal mixing valves

advantages : one- you do not have to buy the more expensive TWH that automatically adjust for solar thermals as they are usually about double the cost of a normal TWH, two - it more accurate and uses less energy over all ( my previous TWH was one that adjusted out put for incoming water temp, but even if the solar water temp was well over the Maximum temp it would still fire and the minimum consumption rate I could achieve was about 2Kw on my previous auto adjusting TWH…

and it uses one NTC 10K we use this type of analogue sensor, because of the speed it is sampling at approximately 200 - 300 times per second on the ESP that I am using . and it will quickly adjust for rapidly changing environment

I haven’t looked at your sketch but why would you need to sample temperature readings at 200 - 300 times per second? Is your system hooked up to a nuclear reactor?

the simple answer — it the way I fire the SSR or triac it not synced to the Sine of the power line ( it has no clue) . I use a frequency based method . that is the pulse is running at a slightly different then the sine of the power line. it imitates being sync to the power line sine and creates dimming. as the zero cross happen at a descending or ascending intervals as the frequency of the pulse changes up or down - but also the dimming is not very linear . so the High frequency of sample allows for it to make rapid adjustment to the pulse. so it stay very accurate… and 200 - 300 samples per second is not that different then the 120 zero crossings ( so it might make one extra pulse adjustment up or down within 1/2 sine wave )–

– it the same reason why Robert complains that my Diverter sketches should not work… but it does and works quite well as it runs within a <30W accuracy over all, BUT in it sweet spot runs <5 watt accuracy when using 1000 watt diverting element

here the simple diagram for how it is built 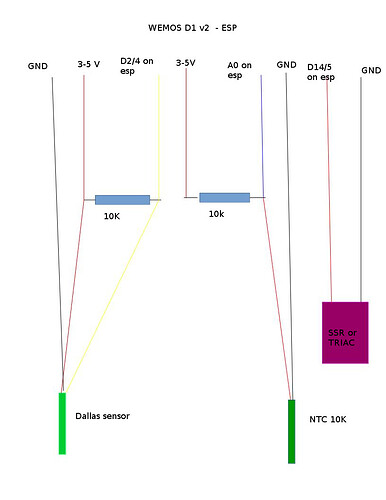 Hi there not sure how many are using Solar thermals

Interesting post Steven. I had looked at the Stiebel Eltron tankless heaters some time back and was disappointed that the controls were so basic. I do have solar thermal and feed the solar tank to a standard electric resistance tank. It’s not a great system, but does the job. Since I’ve had this rig for more than 30 years across two houses, I’ve had some time to consider what I would like to do if I had to do it over, and it usually involves point-of-use electric heaters. I’m assuming you have one of these connected to your solar tank output.

As I contemplated the problem, I came to the conclusion that the biggest waste of hot water energy (and water in general) was the distribution loss from remote fixtures, mainly bathroom and kitchen sinks. It’s also an inconvenience that drives people to install yet more wasteful solutions like circulating pumps. I had the idea of servicing these fixtures with home-run lines at room temperature, and using point-of-use electric devices at the sink to raise the temperature to expected levels, possibly adjustable. I had calculated that 1/2 gpm 68F to 110F would require about 3300 watts, which would be 13.75 amps at 240. This is reasonable with standard 12ga wiring and a 20A breaker.

I was wondering what kind of response you experience and how accurate the temperature control is. I’m tempted, in light of your post, to try to develop a prototype control along these lines. I might take a different approach to temperature sensing and triac operation, but the basics would require pretty fast response to temperature change. I use the dallas sensors in my current rig, and they work fine for the gradual changes that I am measuring, but they are a chip inside a stainless tube, that is typically inserted into a stainless or brass well. Even using thermal grease, the response isn’t that fast. Is there a type of 10K sensor or other that responds faster? I know I have a meat thermometer for grilling that is almost instantaneous.

Thanks for the post and the info on your controller. If you have any thoughts on my ruminations, feel free.

Hi Overeasy- for me it running fairly accurate. in my current configuration… when starting from a cold system. but if the solar reserve are hot ( or even cool) when it fist comes on it might slightly over heat the water coming out of the TWH by 2-5 c but by the time it reaches the facet it is dropped considerably… then once it reached it operating temperature it stay within 0.5c unless there a fairly big change in flow then it take a moment to readjust then it back to with in it 0.5 c operating range again.

I am using NTC 10K from my solar water heater tank sensors as i have a ton of spares that were just lying around. they look just like the dallas sensors - for me I I just wrapped it tight to the copper pipe with aluminium foil , shrink tape and then insulated with water pipe insulation. the response time is pretty good . and almost instantaneous for small temperature changes <1 c . large changes will take abit of time to accommodate ( 1-5 seconds ) … just in either case it does not exceed more then ~2 c above the set max temp …
for me i am using a whole house configuration and a 9kw TWH. ( not under each individual sink) as it is how it was originally set up

if you were curious that my setup

description of the display:
first line; solar tank temperature, differential of temps
second line ; the current temp of the out put of the hotwater line, the triac pulse rate required ( 0 - 1024)

other side note : I see after a few days my 9kw was too much for my 40amp bta40 as a single so i had to install two bta40 one for each element … and i probably change my code a bit more. based on solar tank temp whether or not to fire the the second element . ie if solar tank reservoir is less then 35C which is pretty rare ( but price wise a 9kw twh cost the same as 4.5 kw )

here a a short video of it in action… I change the it operations abit I added in a 3rd temperature sensor.
break down of sensor configuration-
1- digital Dallas sensor at the solar heat reservoir tank
2 -anlogue - NTC 10K sensor attacked in side the DHC copper out line inside instant water heater
3- digital Dallas sensor attached down stream of instant water heater to see temp in water pipes