Solar Panels (PV) - Is this normal?

Just had PV panels fitted to the house, unfortunately still waiting for batteries but I got the monitoring hooked up via the EmonPi, and was wondering if you all thought the following solar production looks normal, in that there seems to be a ‘ceiling’ at around 3.8kW for solar production, and why that might be?

Edit to add: The system was sold as capable of 6kW, consisting of 16 420w panels, and Solis inverter. 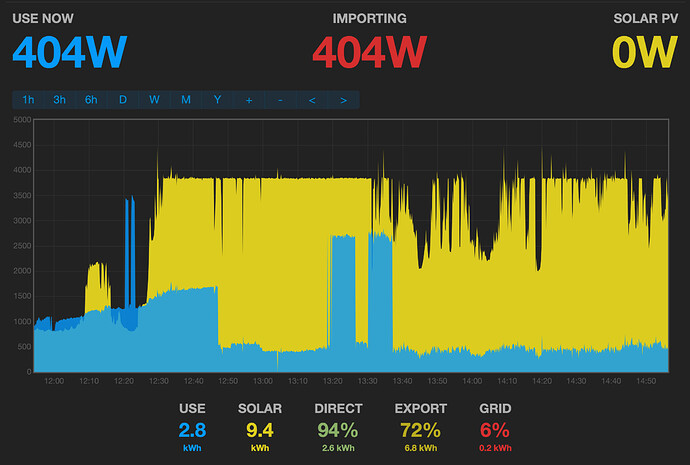 Your thoughts most appreciated!

Need a little bit more detail to be sure. Inverter capacity (model) ? How are the 16 panels arranged? At a guess they will be in two ‘strings’ with maybe one string facing East and the other West?

The 16 panels are in two strings, 9 panels facing SE and the other 7 facing SW, but I don’t see a difference in the ‘ceiling’ at time of day, so not sure it’s that. Also you can see there are small spikes breaking through but it looks like something is happening at 3.8kW…

Hi Nick,
Im no expert. My amateur observations are as follows

Yes the16 Panels will if all pointed in the same direction and at the right angle towards the sun will produce 6Kw. Having 2 strings pointing in two SE/SW directions is generally ideal for a more consistent output over more hours of sunshine.
Your inverter has a rated output of 3.6Kw by my quick research.
In the middle of the day under ideal conditions the two strings will at times add up to more than the inverter capacity.
As you are in the top half of the world, right now you will probably be getting great sunny weather, unlike we have right now in southern OZ

What tilt angle are the panels at? This will also be a factor for good winter PV production.

Thanks Murray, is there much point in having panels capable of delivering 6kW, if the inverter is only rated to 3.6? Perhaps the wrong inverter has been installed?

Perhaps the wrong inverter has been installed?

See a previous discussion about “oversized” panels here: Another Enphase Envoy-S integration into a local EmonCMS - #20 by Greebo

It’s a good question and one I see asked often. It really is hard to answer in my opinion, because it is different for everyone.

As Im not sure of your local situation there (you may have different rules or regulations for your Grid connection for example) I can only comment on what the general rule is here in my area. When I installed the 4.5Kw system here 8 years ago, this was the largest system I could connect at the time without a complicated application for a bigger system. I installed 18 250w panels (2 strings all pointing due North at ~25deg) connected to a 5Kw inverter, because that config complied with the rules and regulations here at the time. If I installed a system today it would look a lot more like your system. So many things have changed over the years here in Australia. Feed in Tariffs change most years, Retailer plans are always changing, peak hours change, its a cruel game that I waste so much time on trying not to get ripped off. …. sorry I went off on a tangent there

Most of my reading these days seems to suggest a general rule is to install 30-40% more panels than the inverter is rated at.
And depending on your intended usage , an East and West split is better.

Are you in the UK? Did you / your installer get permission from the Distribution Network Operator (e.g. SSE, United Utilities etc)? It will have been a lengthy process with various forms or did they do it and then notify them? If the latter it’s called a G98 notification and the inverter had to be capped at 3.68 kW. My Huawai inverter was capped at this by the installer.

I’m in Southern Scotland and the installer has mentioned they will complete the DNO etc due to the size of the specified system, so still unclear why I’ve ended up with a 3.6kW inverter. 3.6 is the max capacity of the model installed, but higher capacity models are available (Solis https://www.ginlong.com/rhi_inverter1/1952.html)

Edit - Having looked again, I’m saying it’s a 3.6 model, because that’s what it says on the manual, but the range is also from 3 - 6kW… So I don’t actually know what capacity it is! Other than the ceiling figure shown on the graphs, with very occasional spikes above the 3.8 figure

I’m not sure if I’m understanding everything correctly, but my take is that if the installer has sold me a system capable of capturing 6kW of the sun’s energy, then the inverter should be able to handle that? We have 10kW of battery storage on the way so (again, assuming) would think that an inverter capable of delivering the full 6kW available at the panels would charge the batteries quicker when there’s no demand in the house.

I could have gotten entirely the wrong end of the stick with this though!

but my take is that if the installer has sold me a system capable of capturing 6kW of the sun’s energy, then the inverter should be able to handle that?

IF you had unlimited funds, sure.

But if you don’t, and the inverter is a big part of the expense, then it makes a lot of sense to provide more panel capacity than the inverter is capable of for the reasons discussed in the post I linked to previously - namely, better “total harvest” during winter or on cloudy days etc.

What did you actually ask your installer for? Was it a particular capacity number? A specific budget figure? Something else?

10kW of battery storage on the way

10kWh of battery not 10kW. When we start adding battery (energy kWh) into the design we get a whole lot more complicated.

better “total harvest” during winter or on cloudy days

This is a much easier way of looking at it. Total Harvest or the area under the yellow solar graph is the key point.
In the first instance, (without a battery in the mix) you are trying to design a system that matches your specific power (kW) use with solar production at all points in time while the sun is up. Yes this is a straight forward power (kW) compare. So if I generally use more power in the afternoon I want more of my panels pointing west. Factoring in Summer and Winter is key here. So this is just maximising your Direct Use.

If you add a battery into the configuration you are really just looking at the ‘total harvest’ not used being stored in the form of kWh.
You would know what your usage patterns are better than I, and what you are trying to achieve with your PV setup. I hope the installer took these into consideration.
Without knowing your particular circumstances I don’t think your set up is bad.
PS I dream of installing a battery

if your panel in an “arc” I am still surprised that you are so flat in your output . it would appear to me that you have one inverter and they are pushing both sets of panels through it and the inverter peaking out at 3800. not knowing your “arc” position or angle but if it 6kw I would think it should be peaking at around 4500 maybe even 5000 on a clear day . I find having 1 inverter for doing an arc configuration is like a battery it only preforms as well as the weakest cell allows it - if you want to see if that your problem disconnect the west cell mark down the output of the east. then disconnect the east cell and mark down the out put of the west . add the two together and if it over 3800 then then you know clipping is happening

That’s exactly how I see my own solar production. I’ve had a 6kw system for 7 years now but it’s inverter limited to 3.68kw specified by my DNO. The oversized array means I get much better production during spring/autumn times and the additional panel cost was small compared to the total system and installation costs.

I had a similar issue. The vendor of the invertor had to remove a imitation which kicked in by mistake
I would open a case with them
Fredi

It’s called “clipping”, and as others have said its because your PV array is oversized compared to the inverter.

It’s hotly debated about optimal DC:AC ratios and things, because there’s a difference in cost for extra inverter capacity which may be used for 10% of the time. The marginal cost between the 3.6 kW and (e.g.) 5 kW is about £90 (see here for example), so I doubt they did it for cost reasons. As others have said, your installer has probably selected 3.68 kW because the paperwork for the G98 DNO is simpler than the G99.

You have a couple of options:

Edit: I’ve just noticed you said that you’ve got batteries on the way. I believe batteries require a G99, so I don’t understand why you’ve got such a limited inverter for that size of array - I’ve got 5.1 kW of panels and a 5 kW inverter. Get the installer to explain if they’ve left export control on or fitted the wrong inverter. The inverters all look the same from the outside, so it would be easy to pick up the wrong box.

Could it be that the battery system also has an inverter or is DC-coupled? Otherwise most of your summer generation is going to be wasted as it seems grossly over-sized. At least on dull days you’ll still be well served.

It may well relate to the max export that has been set by the electricity company, the Solis hybrid inverter will actually manage more then 3.6kW when you have battery attached, but will cap the export to 3.6kW always.

As others mentioned, it’s a limitation set by the DNO of 16A rather than the power. So depending on the grid voltage at your house, this equates to 16A x 230V = 3,680W.

Ok, thanks everyone for the replies. Does this limitation not slow down how quickly the batteries would charge?

As others have mentioned on a clear day the panels should be producing much more, and whilst export caps to the grid are understandable, surely charging batteries etc should be maximised?