I have an emonTx V3 with 3 clamp-on sensors instrumented on the main consumer unit and PV output in the garage of an old Victorian barn. It communicates with an emonbase raspberry pi that sits in the reception room (first floor). Unfortunately the garage wall is extremely thick (330mm solid stone) and the emonTx V3 signal fails to reach the emonbase (only with the garage, hall and reception doors open which isn’t practical).
Does OEM have a range extender or a solution to overcome this problem? The emonbase raspberry pi can only sit in the reception room where the only internet connection exists.
Appreciate any suggestions …
M Roy

If you can drill through the wall, you could attach the aerial (or probably better, a weatherproof one for external use) via an extension cable.

Or can you relocate the emonTx so that it ‘sees’ the base station through less solid materials - maybe the roof? Or move the emonTx outside into a weatherproof plastic box? You can always extend the input cables to the emonTx.

Do you have WiFi, and is your Raspberry Pi Wi-Fi enabled? If no to the RPi, can you add a USB WiFi dongle and move the RPi into a good position to see both the emonTx and the WiFi router?

If none of those is possible, then there is a software solution but it requires reprogramming both emonTx and emonBase, and that will lead to problems when you update either.

Hi Robert,
Superb set of suggestions, many thanks.
1- The option of extending the aerial, is there a limit on how long the extension cable can be? And is it just a simple matter of striping the end of existing aerial cable on emonTx and joining it up with a similar cable? I can extend the aerial cable by about 10m and then it will be in the direct line of sight of the RPi basestation, but I wonder if 10m of additional cable might present any problem?
2- I don’t know if the RPi is Wi-Fi enabled. It is powered by a micro-USB power input and has 4 standard USB port, a LAN port, a HDMI port, and what looks like a video/audio port.
I would love to hear your thoughts particularly on point 1.
Best wishes from a cold and cloudy Newcastle
M

Yes and no! The cable loss is a constant (at any particular frequency) that is a function of length (and cost!). At some point, you’ll lose more in the cable than through the wall, so the shorter the better. You need to check when buying the cable. @Bill.Thomson is the r.f. expert here.

And is it just a simple matter of striping the end of existing aerial cable on emonTx and joining it up with a similar cable?

I thought your emonTx had an SMA connector on it, or is it not a recent V3.4? If it is, you buy a complete cable with SMA plug on one end and an in-line socket - or whatever your aerial needs - on the other. If it hasn’t got the SMA connector, it probably has provision for fitting one (in which case, you don’t need the single wire “whip” antenna).

I don’t know if the RPi is Wi-Fi enabled.

I believe the Model 3 has on-board Wi-Fi. Check what you have against the RPi website.

If it’s 10 m of cable you need, you might prefer to extend your c.t. cables, and relocate your emonTx. Those should be OK if you follow the instructions in the Learn section and use half-decent cable. And an ordinary extension lead will serve for the a.c. adapter.

Thanks again Rob for your support and sensible suggestions.
1- The emonTx is V3 (and not V3.4), and it doesn’t have an SMA connector. I will try to see if Bill Thompson could advise me on how the aerial can be extended.
2- The Base is Raspberry Pi Model B+ V1.2. I think you are right and I can get a WiFi dongle to Wifi-Enable it. I have to learn how to as I think I will need to log into the RPi and reconfigure it for WiFi.
3- Can I extend the CT cable using an ordinary 10m long 3.5mm Jack extension cable? (https://www.kenable.co.uk/product_info.php?products_id=227&gclid=CjwKCAjwzMbLBRBzEiwAfFz4gcMvurt6cgsUNFYaRb0vsh_UMnMaBkWE9HlbuUiKhZJSmU0KBVm2uRoCOZwQAvD_BwE ). That would allow me to relocate EmonTX outside the garage where the thick walls are.
Best wishes and thanks once more.

2- The Base is Raspberry Pi Model B+ V1.2. I think you are right and I can get a WiFi dongle to Wifi-Enable it. I have to learn how to as I think I will need to log into the RPi and reconfigure it for WiFi.

The emonPi used a Pi and an Edimax dongle before the Pi 3 was introduced, so the firmware probably still exists on GitHub. But you may want to lift selected bits out only. I’m not a Pi expert, so I can’t tell you in detail what needs doing.

If you pull it all out of the case, you should see 3 large pads on the corner next to the whip aerial. The SMA solders on there. (2 emonTx’s: top - RFM69CW with whip, bottom: RFM12B with SMA). It also needs a link (the zero Ohm ‘resistor’) moving to connect the SMA instead of the whip to the output. 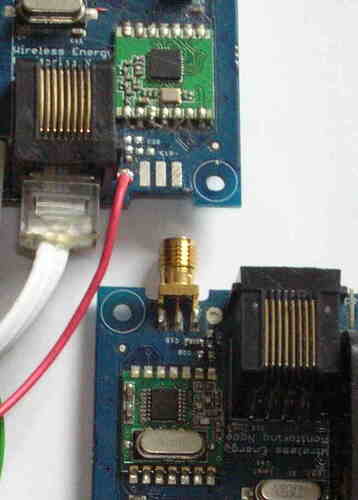 No, for the reasons given on the Learn page that explains the correct way to wire it.