For my first post here I thought it would be nice to share something constructive rather than just coming with problems for others to solve (which will probably be my second post tbh).

I’ve managed to cobble together a quick way to display feed values on a Pebble watch, making use of the emoncms.org API to view feed values without needing to load up the site on a web browser. Useful when feeling lazy. 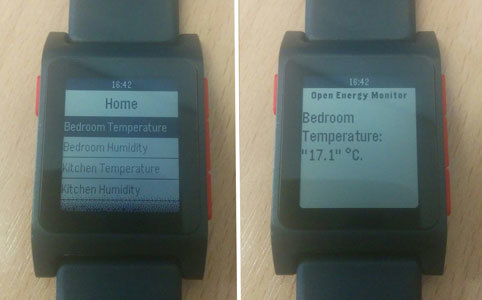 It makes use of Tasker installed on a paired Android phone, along with another Android/Pebble app called ‘AutoApp for Pebble’. For those who don’t know it, Tasker is a powerful, general purpose automation app for Android (it’s not available for iPhone). AutoApp for Pebble is a Pebble watch app and companion Android app that allows Tasker to work with the watch.

N.B. Since Pebble is no longer a going concern, this may become broken before too long

However, this method may extend to Android Wear devices as well, as ‘AutoApp for Wear’ is also available. I don’t have an Android Wear device to try it with, but I’d be interested to hear if anyone manages to replicate this using Wear.

We’ve used the Pebble as a quick and lazy way to check the temperature and humidity in our bedroom prior to heading up to bed: a comfortable night’s sleep for us involves having the temperature just so and the air not too dry (a vapouriser can up the humidity if needs be), but others may have their own reasons for keeping a close eye on some feed values using their watch.

Firstly, install Tasker on the phone that the Pebble is paired with, then install AutoApp for Pebble from the Pebble app store, along with it’s companion phone app from the Google Play store. AutoApp for Pebble cost about 80p or something. Tasker wasn’t free either, but it’s probably worth it for about a million other uses.

I set up a couple of Tasker profiles and associated tasks as follows:

If all of that is set up correctly, you should be able to open the AutoPebble app on your watch, be presented with a list of items, and shown the latest value for each when you select them.

I hope I’ve remembered all of that correctly, and that it proves useful to someone.