Hello all, newbie here. I self-installed an ASHP during the lockdown when I was unable to get anybody else to do it. It was checked over and certified by two qualified ASHP engineers. Problem is, it’s never been terribly efficient and I struggle to get a COP much over 2 which is awful (and pricy at the moment). I can’t find anything obviously wrong with it, though as it was a retrofit into an existing plumbing system, there are some idiosyncrasies.

I have a PassivSystems MMSP, but other than telling me that it’s not very efficient, it doesn’t really help to diagnose the issue(s). It’s also not very user-friendly as I have to download the data using a .csv file and they say they are not developing the package any further. I’m intrigued by the possibility of being able to read the data directly from the ASHP controller as I’ve seen mention on here of. Happy to share screenshots if anybody is interested.

I’ve tried the obvious things, but they haven’t really helped:

Other things about the system that might be relevant:

I’m really scratching my head. I could maybe look at installing another energy monitor, but not sure what I might be looking for. 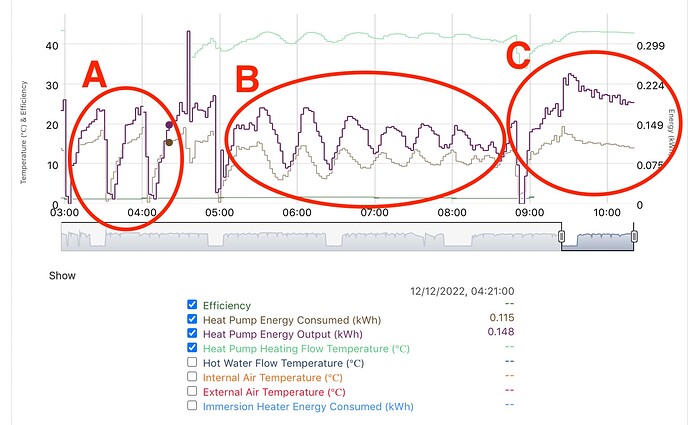 Hi, welcome to the forum!

My immediate thought is: do you have zones, valves or thermostats in the system? Looking at B and C, there’s a sudden jump up in heat output about 20 minutes in, as if there’s a bunch more volume in the system. Try opening all your valves and thermostats and see if you get better performance overall.

Oh, and any buffer tank or low loss header?

Thanks @Timbones - I don’t have any valves on the zones - they are all always on, at least in the winter. A is hot water and you can see the defrost cycles. C to me is roughly what I would expect, though still not very efficient. B is a mystery to me. It’s not a defrost cycle as the heat is continuous, just looks like a sine wave. I note also that the efficiency seems to be decreasing during this period too.

There is a large buffer tank in that the flow and return pass by the middle and lower ports of the buffer, so if there is a difference in flow between the ASHP and the UFH/Rad circuit, the difference should be taken from the buffer. I doubt it takes very much though as the flow between the two pumps is almost exactly the same. Also, even if I turn the connections to the buffer off at the ports, it does not seem to make any difference as far as I can tell.

Do both pumps turn on and off at the same time? Or might the ASHP be running when the central heating or hot water isn’t?

(I’m not an expert, just throwing out some guesses here)

@Timbones any thoughts are valuable as I’m completely stuck! Yes, the pumps come on within 30 seconds of each other. For most of the day they are both on constantly.

I can’t see it on the MMSP but can you add Heat pump return temperature?

We have the 16kW version of this heat pump, we can clearly see when it’s just running pumps, it runs along at 35-40W doing nothing then when the pump kicks in it increases instantly to 80-100W.

I am a little confused by your energy being in kWh rather than kW so may get this totally wrong but in phase B it doesn’t look like it’s doing anything other than circulating, maybe taking heat out of your thermal store and putting it into the floor?

Okay I just had a look at my output in kWh by minute and it looks a bit like yours, so scrub what I said about just circulating.

We have had the HP just over a year and this is really our first time using it with sub-zero outside temperatures. It seems a completely different kettle of fish to how it was in October/November. I even put the Water Law rules back to the recommended 37/50c at 15/-2c, it’s using a load of energy. We had previously been using much lower temps but it was running all the time at about 3kW input and the house wasn’t warm enough.

As I said I can make my graph look a bit like yours and what my HP was doing was defrosting about every 50 minutes.

Can you also add outside temperature to your graph? 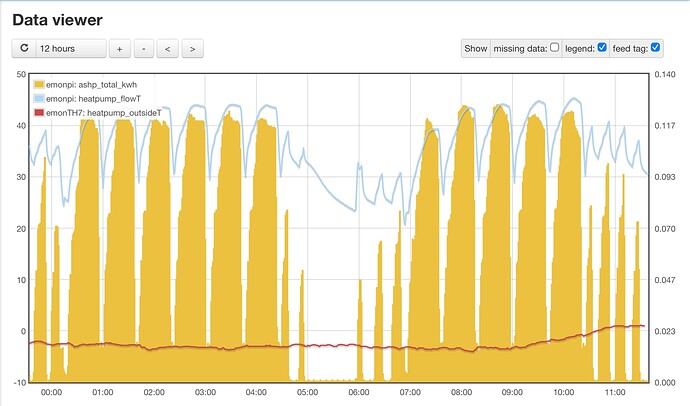 Here’s the graph I made look a bit like yours. I don’t have a heat meter so can’t show kWh generated although the My Heatpump App for this period said my CoP was 3.08.

Hi @christian - the heat pump return temperature is shown on the graph I posted in green, hovering around the 40ºC level. The outside temperature is not shown from the ASHP unit itself (although the unit is measuring it), but from a local weather station, so it’s not terribly accurate. I’ll try and add it though. Longer term, I’d be interested in measuring the temperature from the Samsung unit itself as @glyn.hudson seems to have achieved.

I agree, your graph does look a lot like the one I posted, particularly my area A, but I don’t think my area B is the same as yours as yours looks like defrost cycles, but mine does not seem to be defrosting at that point, rather ramping the heat up and down for a reason that I don’t understand.

@christian here is the external temperature added for the same period, so it was below freezing:

Oh, I thought that was the flow temperature. You want both at the same time really so you can see what difference the HP is making.

Do you have glycol in your system? Maybe the HP is making sure nothing freezes up?

Ah, sorry, I misunderstood. No, the MMSP only shows the output temperature. Presumably I can get the input temperature by looking at the statistics on the controller unit. I’ll have a look.

No, no glycol at the moment as I didn’t want to use it for environmental reasons.

I wrote to Samsung about this, and their speculation is as follows:

It is hard to say what is going on for definite without being at the system and see what it is doing. It could be caused by low load on the heat pump which is causing it to cycle, this is also not good for the performance of the system.

If there are areas of the system which are independently controlled, this could cause the system to cycle dependant on open system volume. It looks like at 0500hrs that more of the system opens up and then there is volume for it to ramp up/down to maintain temperature. Then at 0900hrs again there is more demand allowing it to settle to the constant.

So it might be due to the wooden flooring covering the UFH reducing the ability of the system to transfer the heat, leading to low load.

@christian two updates! I’ve found how to measure the temperature in and temperature out. The difference is only 1-2º, whereas it should be 5º, so it sounds like something is up with the unit. Particularly as it is drawing a significant amount of power to get to that differential.

Separately we had a rather hairy moment this morning after the external unit didn’t warm up again after the defrost cycle. No error codes, and it came back on after a couple of hours of switching it off and on again, but it suggests there may be an issue with the unit.

My temp difference is about 6c; glad it came back on!

Nice work, self installing I did the same

This could be a significant issue, I recently helped a friend that was having heat pump issues with UFH and wood floor. After removing the wood they experienced a significant increase in performance since they were able to run lower flowT.

I’ve just checked the data from my 5kW Samsung ASHP, during a DHW cycle when the flowT is 45C and outsideT is -3C the instantaneous COP was 2.6. Assuming you’re not using glycol the Samsung display under reports heat by 20%, therefore Samsung will be reporting COP of 2. Therefore, it sounds like your system is working correctly, the main issue is the flowT of 45C, this is quite high especially for UFH.

UFH should enable you to run a lower flow temperature of 35-40C. I’m currently running 35C flowT into radiators, over the past week my COP has been 3.44 with an average outdoorT of 0.55C, minimum outdoorT was -5.2C!

Here’s a link to my data: Emoncms - app view dashboard

It’s also worth looking at https://heatpumpmonitor.org/ to compare live data from other ASHPs, when it’s -3C or below outside you can expect a COP of less than 3. The overall seasonal COP (SCOP) is what’s important, since hopefully it won’t be this cold all winter!

The difference is only 1-2º, whereas it should be 5º, so it sounds like something is up with the unit.

This low dT is probably because the UFH cannot dissipate the heat due to the insulation from the wood flooring. You could try reducing the pump speed which will increase the dT. But don’t worry too much about dT, most systems only get dT5 at max output. I usually get a dT of 2-3C, dT is usually lower with UFH because of the larger surface area.

What size are your UFH pipes and what’s the spacing?

This could be a significant issue, I recently helped a friend that was having heat pump issues with UFH and wood floor.

I didn’t make that mistake twice. Second house, UFH is tile covered with the odd rug or 2.

The UFH pipes are 15mm and spaced around 150mm apart.