Here is the thread to record the redis CPU issue.

. I’ve tested on two separate rPi 3B+ devices. Same issue on both.
. Issue apparent upon fresh install, no changes, no updates.
. I’m connected over ethernet.
. Makes no difference running emonBase update as of today.
. SHHing in early during the boot process it can be observed the moment when the issue becomes apparent.

That last line might be a hint? Looks like redis is trying to fill/load/read the buffer and not having much success

What’s particularly weird is that on my screen it displays as this:

I’ve checked on an older Pi running Oct2017, it’s the same, the clipboard behaviour has been inherited from there. redis CPU usage is about 1.3%. Unlikely that Buffer : loading is the problem.

Are you saying that the screenshot and the clipboard text in that post are from the same “view” at the same time?

If so, then I suggest you remove the text version and just put the screenshot there, one thing worse than no information is incorrect information

Absolutely, 100% correct! if only that was more widely understood, accepted and accommodated, life would be sooooo much easier.

What’s in the way of myself, and others here probably, making and sticking to correct information is impetuousness.
I’ll might make more mistakes… I’ll try into the future to keep it accurate

My previous post though was accurate. Both the screenshot and clipboard are taken from the same view seconds apart on a rPi3B+ that’s been running for a while on the Jun2018 image. This could be put down as a separate bug as it’s repeatable behaviour. The behaviour was inherited from the Oct2017 image.

The comments about correct info are in no way aimed at you Dan (or others that take info at face value) I would perceive you as the victim of the mis-information rather than the perpetrator.

I wonder how much time has been lost pondering on why the buffer is “loading” rather than pursuing the real issue unhindered by that mis-information.

What is really frustrating for me personally is the fact I objected to the way the copy to clipboard was done at the time. The data is collected independently for each method (screen or copy) so there could potentially be vast differences, unless you open the server info dropdown and manually go through checking each and every word, you do not know if what you (the user) are offering as fact is indeed so. There is also 2 lots of code to maintain.

Regarding the issue at hand…

What I find more interesting is the fact you have 0 keys and 0 running time for Redis, the server time suggests it’s not just been rebooted, but it does differ to the previous server info so I guess you are rebooting and restarting stuff. How long has it been since you tried to restart redis or rebooted?

30% CPU load when it’s not actually doing anything (ie no keys etc) might suggest it’s sruggling to get started, perhaps that high load is it trying to connect or create a log file or something else preventing it getting up and running.

What do you see if you try to restart it from the command line?

have you checked the redis logs and emoncms logs?

What are your Redis settings in emoncms/settings.php?

I also notice the redis php extension module is 3.1.1, that’s quite dated. The current version is 4.1.1, but there were “potentially” breaking changes made in v4 (see Possible breaking api changes in php-redis · Issue #836 · emoncms/emoncms · GitHub) so I’m still running v3.1.6. I doubt this is the cause (guesswork) but worth a mention.

[edit] Oh! And another long shot, are there any redis files in /var/lib ?

[edit2] Also was it doing this before you started the SMA inverter/pvoutput stuff? Or have you since retested on a vanilla image? It’s just that you mentioned editing the rc.local file and that is also where the redis-server (and other) logfiles are created and then the services restarted. Can you confirm there is a logfile for redis created during startup?

[edit3] Issue opened about the difference in reported info

Issue apparent upon fresh install, no changes, no updates

and based on the Server Information, its a “fresh install” of emonSD-13Jun18.

In the other thread that this post started in, I’m pretty sure dan mentioned he’d been able to reproduce it from a freshly imaged SD Card, so I have been assuming when he says “fresh install” above, that he really means “SD Card with a freshly written image booted up for the first time”.

@danbates, can you confirm when you say “no changes, no updates”, you mean exactly:

and absolutely nothing else?

can you confirm when you say “no changes, no updates”, you mean exactly :

and absolutely nothing else?

I can confirm that. Using etcher to write the image on mac osx el capitan.
I neglected to mention it was the experimental stretch image in the original post as this followed from another thread.

@pb66 I’ll have a look at your notes soon. Glad you beat me to it on opening a github. @glyn.hudson I’m sure you’ve got input. If you need help testing let me know.

I’ve edited the thread title to include the emonSD image name, for any future explorers.

@pb66 and to add onto the list of things to test, is whether something changes when redis has something to process, i.e. when emoncms is receiving inputs.

What do you see if you try to restart it from the command line?

have you checked the redis logs and emoncms logs?

What are your Redis settings in emoncms/settings.php?

I also notice the redis php extension module is 3.1.1, that’s quite dated. The current version is 4.1.1, but there were “potentially” breaking changes made in v4 (see Possible breaking api changes in php-redis · Issue #836 · emoncms/emoncms · GitHub) so I’m still running v3.1.6. I doubt this is the cause (guesswork) but worth a mention.

[edit] Oh! And another long shot, are there any redis files in /var/lib ?

and 9. give it inputs to process.
no change.

Not even with sudo ls -la /var/lib/redis ?

This is in syslog:

RunTimeDirectory sounds important, it looks like its value couldn’t be loaded from the config?
There’s no errors in the redis-server.log indicating there’s an issue though, but probably worth checking anyway.

I just found a bug report on Debian bug reports which says:

I think the lvalue should be ‘RuntimeDirectory’ according to man (5) systemd.exec. Note capitalization.

Followed by (in closing the bug report):

We believe that the bug you reported is fixed in the latest version of redis, which is due to be installed in the Debian FTP archive. A summary of the changes between this version and the previous one is
attached.

Thank you for reporting the bug, which will now be closed. If you have further comments please address them to [email protected], and the maintainer will reopen the bug report if appropriate.

And then only a few months ago on the same page, it was reopened again:

So, is it worth changing the case of “RunTimeDirectory” to “RuntimeDirectory” in /lib/systemd/system/redis-server.service (should be on line 14) and see if there’s any change?

[Edit #2] I just checked the man-page for systemd.exec and the RuntimeDirectory directive is used to create runtime folders under a root folder as defined in the following table, so likely there are runtime folders that are expected to exist but do not.
Table from man-page:

Not even with sudo ls -la /var/lib/redis ?

Got it. I’d like to know how that command works.

. Correcting typo on line 14, reboot, no change with issue.
. Directory /run and /run/redis contents below… Not sure what I’m looking for. 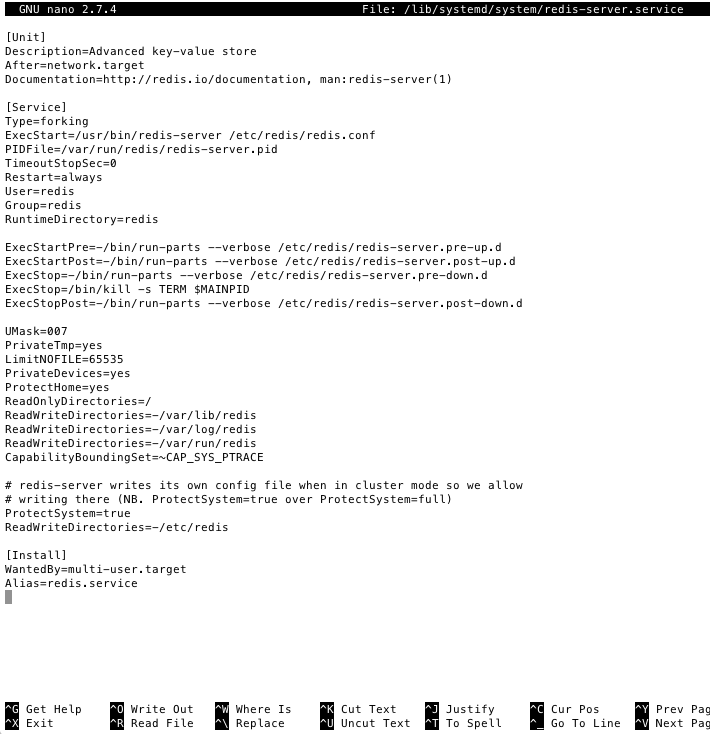 Got it. I’d like to know how that command works.

More usefully is actually understanding why “sudo ls -la /var/lib/redis/*” doesn’t work. See this post of mine here.
In previous distributions that file would have been deleted as part of the “making read-only”. It was recently discovered (in that thread I just linked to) that there was an error in the build guide which leaves that file behind causing other issues (as per that other thread). Try removing it using:

Correcting typo on line 14, reboot, no change with issue.
Directory /run and /run/redis contents below… Not sure what I’m looking for.

Ok, looks like once the folder was there, all it created in that folder was the .pid file (which is normally used to track what PID the process is running under) so it probably didn’t have any consequences beyond logging an error in syslog on service startup.

See how you go removing the dump.rdb file from /var/lib/redis.

See how you go removing the dump.rdb file from /var/lib/redis .

Removing seemed to happen OK. No change with redis.

I notice on the redis website we’ve got a newer old version 3 to try out.