(I hope this question is OK here, despite me not yet engaging in emon / Pi)

I moved into a house which has solar panels and a RIHXE12R. I am unsure of the led status of this device and I am wondering if someone can confirm if it is working correctly.

The house is 27 months old and was fitted with PV by the developers. The RIHXE12R red led is on continually, and when there is sunshine it is on solid for five seconds and blips off for milliseconds and then solid again for 5 seconds and repeat. It has been suggested that the RIHXE12R has been wired incorrectly.

Can someone confirm this is likely? Can I check this myself (am competent with electrics)? And if it is the case that this has been wired incorrectly what are the implications for the past 27 months?

I’m not familiar with the device but you might try this for the LED status: RIHXE12R - User Manual

Yes I have a copy of that manual. It’s still not clear and maybe there is something lost in translation

LED is available for the meter. LED is on to indicate the meter is connected to power supply and it flashes to indicate enegy consumption."

The Rayleigh product page states this:

that is a bit ambiguous. Does it mean a no current fault or no current due to no sunlight.

What do other brands of meters do?

Generally, but noting that your meter is specifically for Solar PV, a steady LED indicates that the current/power is below the threshold at which it registers energy consumption (“anti-creep” - mimicking friction in a Ferraris meter), or that the power flow is in the reverse direction.

So if it has been wired so that generation is in the forward direction, I think it’s probable that a steady red means either no generation or it’s seeing the inverter’s “stay alive” consumption.

Thanks for the reply Robert but I am still none the wiser and need 100% confirmation that the red led being continually on does mean a fault, or ‘the meter is wired incorrectly’.

If anyone has such a meter I wonder if they could check if their red led is on or off in sunshine.

I could check with the neighbours, but if theirs is wired incorrectly too then that is not a conclusive test.

I wonder if @Pukka or @Ian999 could assist here?

Our meters led is always red and goes off every so often.

you have the import and export the wrong way round.

Generation/export 2864.13kWh
inverter consumption when no solar 25.58kWh (ie nothing)

The figure sounds about right for 27 months.

you have the import and export the wrong way round.

Generation/export 2864.13kWh
inverter consumption when no solar 25.58kWh (ie nothing)

Ok, slightly more confused as the manual says this:

Can you confirm that in the day - with sunlight - the red led is on for say 5 seconds and then off for a few milliseconds and repeats? i.e. permanently on with a blip off to indicate power from the inverter? 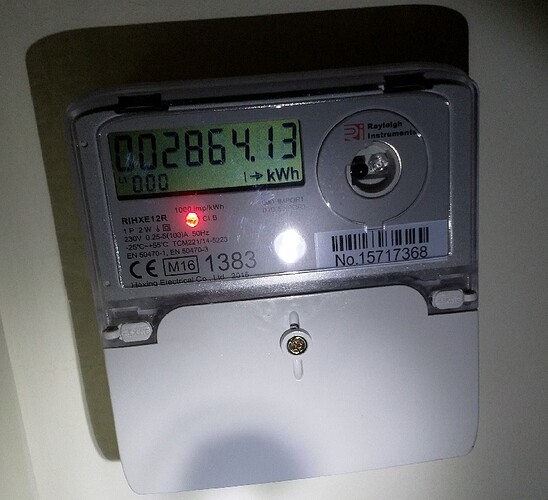 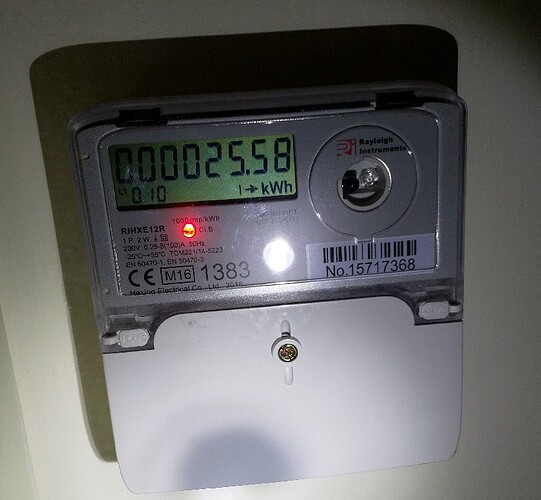 Are you able to identify and trace the cables to the meter? That will be the definitive method.

Again generally, the source of power (Line) will be connected to the left-hand side, the two neutrals to the centre pair of terminals, and load to the right-hand side. If that’s the case, it is consistent with the directions of the arrows on the display; i.e. “forward” power flows left to right, and “reverse” power right to left. in the case of PV, I’d regard “forward” as generating, and that’s entirely consistent with the left-hand side of the meter being regarded as the supply and connected to the output of the inverter. The load in this case is your house and the grid.

I think that meter is a standard energy meter that’s been badged by Rayleigh as suitable for use as a Solar Generation Meter (which it is). What I think might be confusing is your and our definition of “export”, which is out from your house, and if the meter isn’t specifically a generation meter, and it’s wired as I suggested above, then the meter’s “export” is the inverter’s standby consumption when it’s dark.

our led is on and just blips when generating solar

Robert, both cables are standard T&E with no identifiying marks on them. They go up behind a dot and dab plasterboard panel so it would be tricky to trace. I guess I would have to power it all down, isolate and test the cables manually.

@pukka thanks for the confirmation. It seems the manual gives the wrong impression of ‘red means no current’ even though red on and flashing off now seems correct.

Could you just confirm the other query in relation to import and export.