I’d like to record the RSSI dBm values shown in emonESP for three emonTx/ESP8266’s over time, and then display the data on a graph in a dashboard (via emonCMS.org). Is this possible? There doesn’t seem to be a node/input/feed for this but perhaps the data can be picked up from somewhere else?

As an aside, this emonTx/ESP8266 is around three feet away from the Apple Airport Express, connecting via a dedicated SSID. The Airport Express is connected to the router via a 1m Cat5e cable, and yet the RSSI is still marginal … 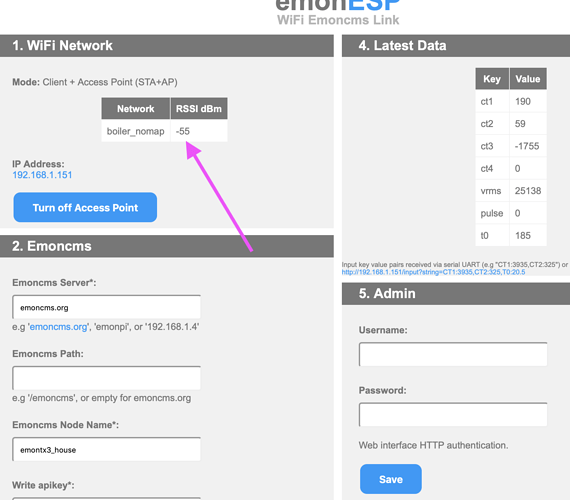 A thought: has either end turned the power down because it thinks it’s got an adequate signal?

An RSSI of -55 dBm is actually a fairly decent signal level.

Granted at 3 feet it should be stronger, but the lack of said signal strength
suggests an issue with the antenna or feedline. (or both)